Full-blooded, ferocious, fearsome and now the front-runner – Owen Farrell’s rise to the captaincy of England has been a long time coming.

The youngest-ever professional rugby player in union when he made his debut shortly after his 17th birthday for Saracens – Farrell stepped onto that field against Scarlets in the then Anglo-Welsh Cup and began barking orders. He has hardly stopped since.

A leader of men and a goalkicker of rare nerve – Farrell is the key cog for club and country.

He sets the standards for Eddie Jones’ side – both on and off the pitch – and with a Guinness Six Nations and a Rugby World Cup on the horizon in 2019, his ascension to the captaincy is perfectly timed.

CHIP OFF THE OLD BLOCK

The son of dual-code rugby legend Andy, Farrell junior has always appeared preternaturally gifted when it comes to the sport of rugby. 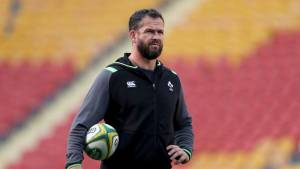 Captain of England’s age-groups, he led England Under-20s to a Grand Slam in 2011 alongside his friend and now senior international teammate George Ford.

A year after their age-group triumph however, Farrell was in the pressure cooker of Guinness Six Nations rugby.

Stuart Lancaster saw fit to throw him into the starting XV, first at inside centre and subsequently at fly-half for a new-look England team.

He kicked points with now customary precision in wins over both Italy and Scotland and has hardly looked back ever since.

Both Lancaster and now Jones have flitted between using him at No.12 and No.10 – the latter being where he has played his best rugby for Saracens and led them to two European titles.

But both England head coaches agree on one thing – Farrell has to be on the teamsheet somewhere.

Four times runners-up in this Championship under Lancaster – when Jones took over they made the leap. 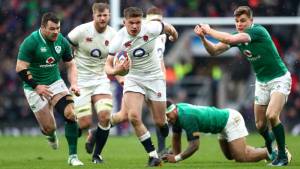 A Grand Slam followed in 2016 – Farrell’s boot key in wins in Paris and in Edinburgh in particular – and another Championship arrived in 2017.

England were on the All Blacks’ tails for the No.1 ranking and Farrell – a Lions tourist in 2013 – became a Test star four years later in their historic drawn series in New Zealand.

This past year has been one of the few dips in the seemingly never-ending Farrell rise.

England dropped to fifth in the Six Nations after defeats to Scotland, France and Ireland while Saracens were sent packing from Europe in the quarter-finals.

But despite all that, Farrell has rarely allowed his own form to fall – he fought tooth and nail to try and bring England back into the Calcutta Cup clash at BT Murrayfield, captained the side in Paris for the first time and led Sarries back to the Premiership title after their European disappointment.

Then this autumn he defended as if his life depended on it as the Red Rose appeared to be returning to full bloom with wins over South Africa, Japan and Australia.

Now 27, and already with 65 England caps to his name, the records look set to continue to tumble for the England star.

In Dylan Hartley’s absence he captained England in South Africa last summer, then was co-captain in the autumn before taking sole ownership for the Wallaby clash and now this year’s Championship.

England are now Farrell’s team – and it will probably take more than minor thumb surgery to keep the main man from their opener in Dublin in a fortnight’s time.

There Farrell will be hoping to unpick an Irish defence drilled by his own father.

But professionalism is Farrell’s watchword and in a World Cup year – the playmaker will want to hit the ground running and stamp his authority on a team back on the upswing.