Super Saturday saw the 2019 Guinness Six Nations come to a fascinating climax but the final three games would also have proved decisive for countless fantasy managers.

With plenty of mini-leagues and the all-important League of Nations being decided in the official Guinness Six Nations Fantasy Rugby game, Damian Penaud’s match-saving tackle, Jordan Larmour’s late score or Stuart McInally having just enough in the tank to reach the try-line could well have made the difference.

England fans ultimately took the bragging rights in the Fantasy League of Nations as they accumulated an average of 2255.3 points across the Championship, just ahead of the Welsh supporters, but both nations provide a maximum of four players to the Fantasy Team of the Championship. 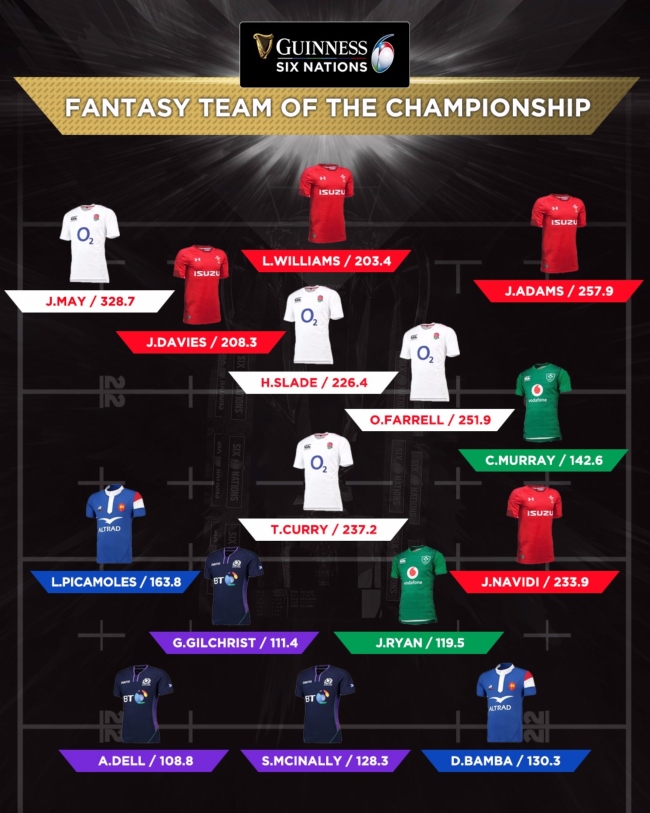 Flying winger Jonny May ended up as the most expensive player on the game at 19 stars but he was worth every one of those after taking the honours as the highest-scoring player, totalling 328.7 points across the Championship – with his Round Two total of 117 the highlight.

He is joined by the highest-scoring forward in the game, Tom Curry (237.2 points), while fly-half Owen Farrell (251.9) and centre Henry Slade (226.4) round out the quartet of Englishmen.

Three of Wales’s four men in the Team of the Championship are also backs as Liam Williams (203.4 points) gets the nod at full-back, Jonathan Davies joins Slade in the centres thanks largely to his score of 60.9 in Round Four, while Josh Adams represented great value throughout the Guinness Six Nations with his 257.9 points.

The only non-English or Welsh back to get the nod is Ireland scrum-half Conor Murray while Josh Navidi was the only forward outside of Curry to clear the 200-point barrier after ending on 233.9.

French powerhouse Louis Picamoles is the third loose forward in the star XV while Scotland provided great value in the front five throughout the Championship.

Three of that quintet in the Team of the Championship are Scots, with hooker Stuart McInally, prop Allan Dell and lock Grant Gilchrist – who racked up 72 tackles – getting the nod.

And completing the XV that would have led you to Guinness Six Nations Fantasy Rugby glory are French prop Demba Bamba (130.3 points) and Irish lock James Ryan (119.5).