The 2005 Championship is indelibly etched in the memory of every Welsh rugby fan, as a scintillating spring saw Mike Ruddock’s men win their first Grand Slam in 27 years.

The clean sweep was completed with a memorable 32-20 win over Ireland – a team they hadn’t beaten since 2000 – at the then-Millennium Stadium, sending Cardiff into a weekend-long party.

But what happened to the Wales starting XV that day, and the 2005 Championship’s other key contributors?

The man who sealed the Grand Slam. Perhaps Kevin Morgan’s finest moment in a Wales jersey came in that match against Ireland as he ran a supporting line for Tom Shanklin and scored the try that, after the conversion, put them 29-6 ahead.

The quiet man of the team, who won 48 caps in a ten-year international career, spent a decade as fitness coach at Ospreys after retiring from playing before a 12-month stint as the head of physical performance for the Georgian national team.

He returned to the UK last year and now works in the strength & conditioning department for English Premiership side Bristol Bears. 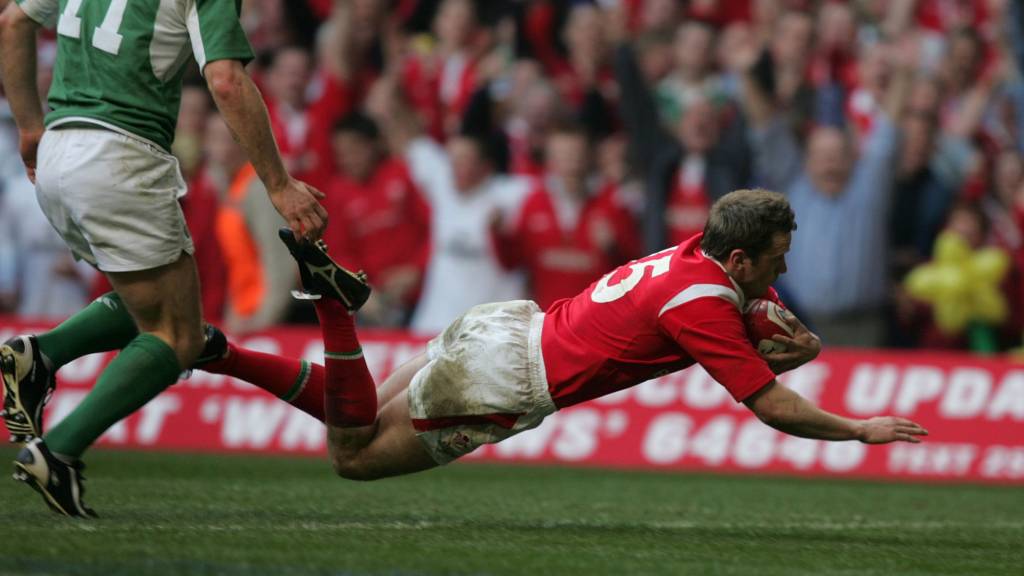 With more than a decade of international experience, Mark Taylor’s international career was winding down when he started against Ireland in 2005 due to an injury to Rhys Williams.

A centre by trade, this was his only start for Wales on the wing and he made just three more appearances for his country following that day in Cardiff.

Taylor retired from rugby at the end of the 2007-08 season and spent time as team manager for Wales Under-18, Under-20s and then Scarlets – stepping down from the latter role in 2018 – as well as working as a part-time accountant for HJ Phillips & Son Ltd. 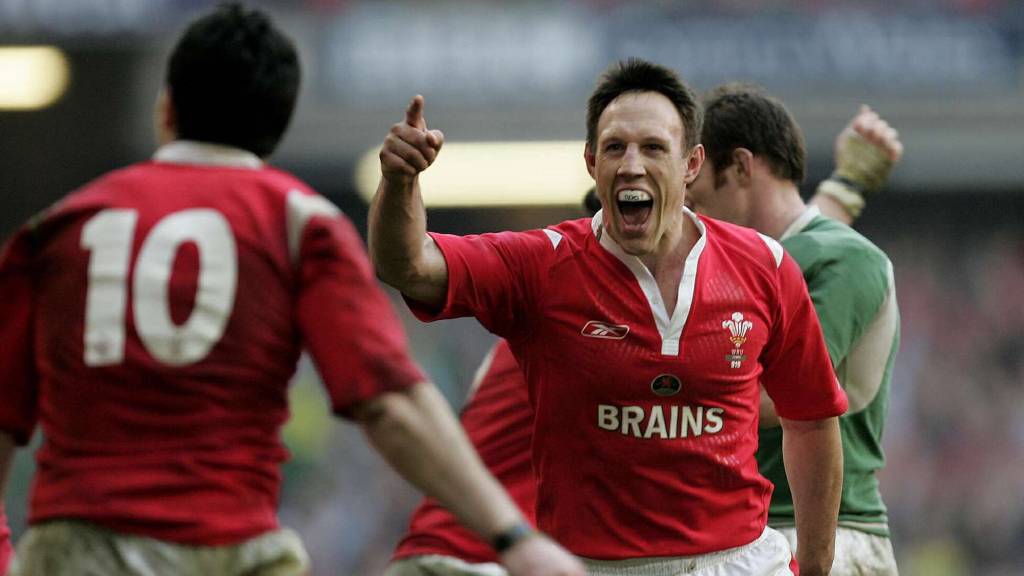 Classy centre Tom Shanklin made 70 appearances for Wales and toured with the British & Irish Lions in 2005 during an illustrious professional career.

He retired in 2011 following a fourth knee operation and now fronts the popular Flats and Shanks podcast with ex-England international David Flatman, as well as doing punditry for the likes of BBC Wales, Sky Sports and Channel 5.

Aside from his punditry, Shanklin is also a regular on the host/MC circuit and set up his own company, ‘Genero Experiences’ where he provides hospitality at international rugby events. 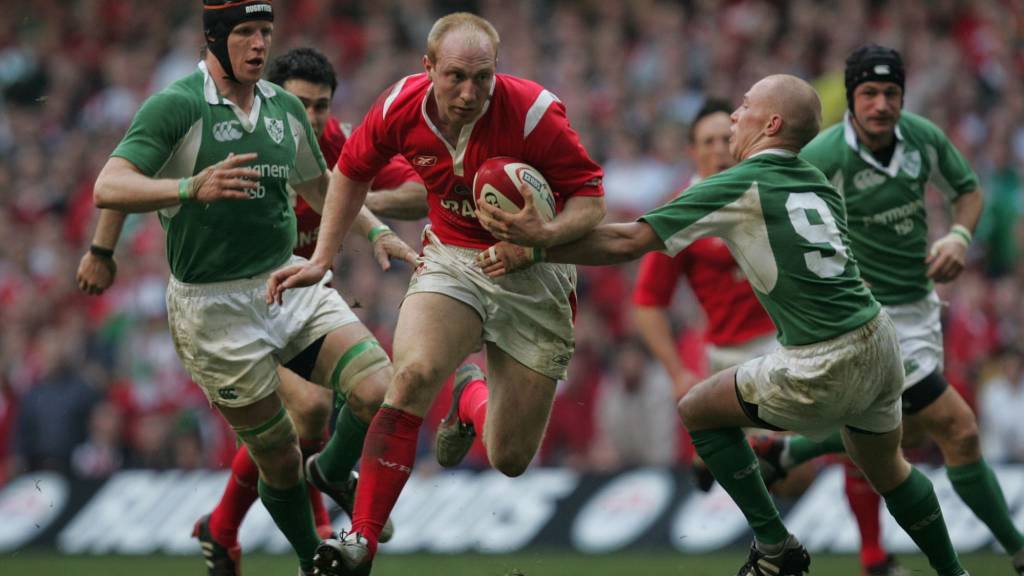 The man who shot to prominence during the 2005 Championship and became a Welsh rugby hero when he launched a 45-metre penalty from the right touchline with just minutes to go as Wales beat England 11-9 in Round 1.

Something of a controversial figure during his rugby career, and a tabloid favourite due to his relationship with singer Charlotte Church, Gavin Henson broadly retired from rugby after being released by the Dragons in 2019.

Since retirement he has turned out for Sunday League football side Super Fox United in the Bridgend and District League, while he has also opened a pub in his home village of St Brides Major.

Henson has appeared on many reality shows over the years including Strictly Come Dancing, The Bachelor and Celebrity Hunted.

A Welsh rugby legend in every sense, Shane Williams is still Wales’ all-time record try scorer with a remarkable 58 in 87 Tests.

He was voted Six Nations Player of the Championship in 2008 as he helped Wales secure a second Grand Slam and made his final Test appearance against Australia in 2011 – inevitably capping his career with a try.

A regular on the rugby punditry scene, Williams also keeps himself busy by running marathons, competing in ironman triathlons and doing long-distance bike rides – all of which have helped him raise money for charities during the ongoing lockdown.

Stephen Jones made over 100 appearances for Wales and played in two Lions Test series before retiring from playing at the end of the 2012-13 season.

He then took up a coaching role with Wasps, under fellow Welsh international Dai Young, before impressing as attack coach at Scarlets and earning a job as assistant coach in the Wales set-up in 2019.

The No.9 pulling the strings for the 2005 Grand Slam decider, Dwayne Peel retired from rugby in 2016 after a battle with shoulder injuries – exiting as Wales’s second most-capped scrum-half behind Mike Phillips.

Peel has turned a successful playing career – which included a Lions Tour and spells with Scarlets, Sale Sharks and Bristol – into a promising coaching one.

His first chance came as part of the Bristol coaching staff and he then moved to Ulster in 2017, where he is a highly-regarded assistant coach with a bright future. 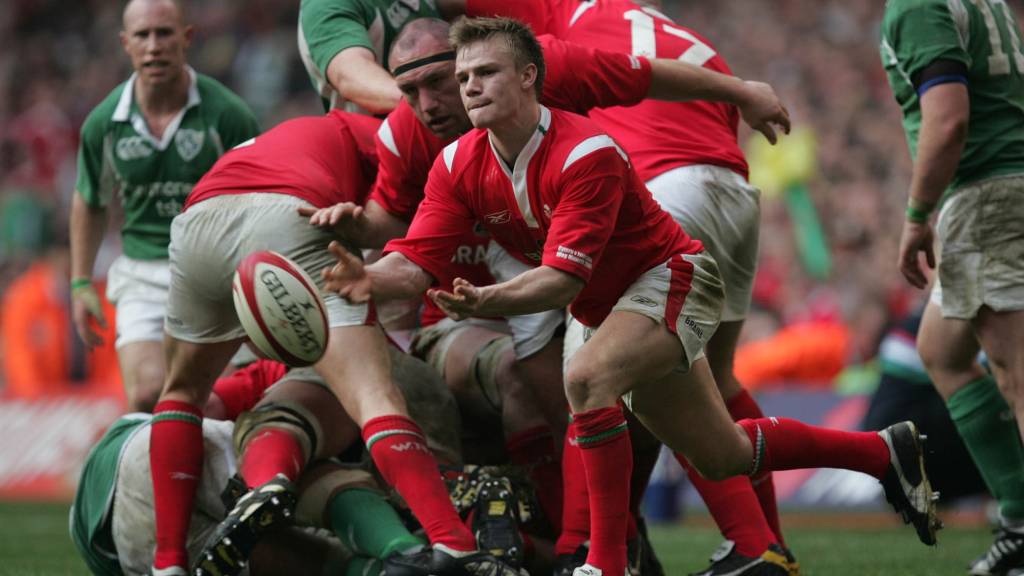 An absolute stalwart of the Wales front row for 14 years, Gethin Jenkins made a mammoth 129 appearances for his country – holding the title of their record cap holder until being surpassed by Alun Wyn Jones – and toured with the Lions on two occasions, only missing out on a third Tour due to injury.

He scored the opening try in that 2005 decider against Ireland, lifted three Grand Slams, four Six Nations titles, played in four World Cups and also won both the Challenge Cup and Champions Cup during his playing career.

Jenkins eventually retired from playing in 2018 and took up a coaching role at Cardiff RFC, while also helping out with the Cardiff Blues development side and then joined the Wales Under-20s set-up as defence coach this year.

Considered one of the most laid-back men in Welsh rugby, Mefin Davies made 38 appearances for his country during his playing career and his accurate lineout throwing helped them win the 2005 Grand Slam.

After transitioning out of playing, he became head coach at Swansea RFC and worked as development coach at Ospreys before heading across the Severn Bridge to become scrum and assistant forwards coach with English Premiership side Worcester Warriors.

In February, it was announced he will return to Wales as part of the Dragons coaching set-up next season under his former boss at Worcester, Dean Ryan.

A secondary legendary prop in that 2005 team, Adam Jones – instantly recognisable by his long shaggy hair – racked up a century of international Test appearances with 95 for Wales and five for the Lions.

Another Welshman to win three Grand Slams and four Six Nations titles, he finished his playing career in England with Harlequins and then moved on to their coaching staff.

The man nicknamed ‘Bomb’ in his playing days uses the considerable experience he gained as one of the world’s best tighthead props as a specialist scrum coach with the London side. 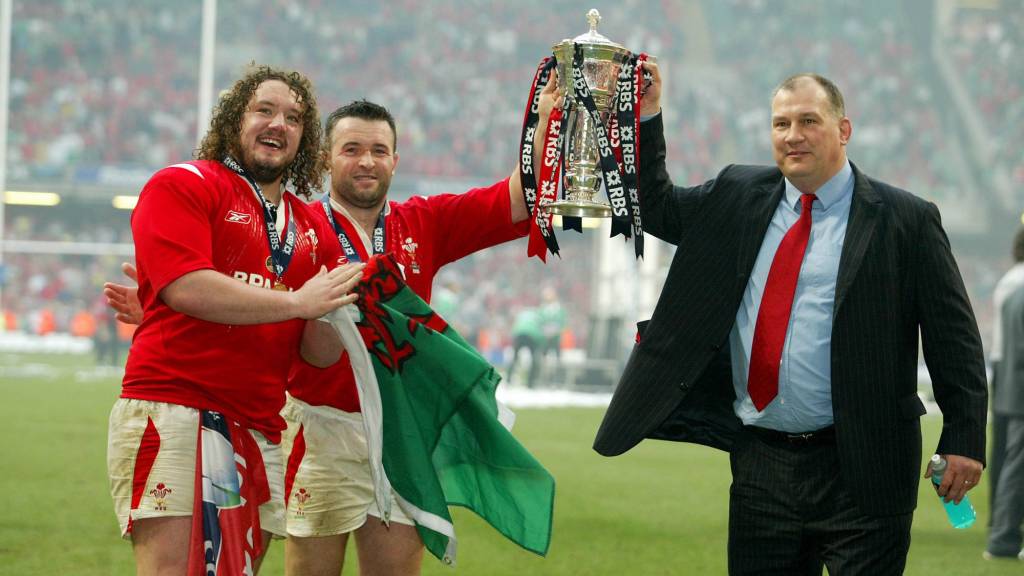 While his brother Matt played rugby for Australia, Brent Cockbain chose to represent Wales and was a key cog in the 2005 Grand Slam team.

Having played club rugby in both England and Wales, Cockbain retired in June 2010 and moved back to Queensland, Australia.

Unlike many of his teammates, he didn’t move into coaching but picked fruit on a friend’s farm for six months, then sailed a catamaran up and down the coast for a couple of years before taking up a job down the coal mines – driving big trucks and excavators.

An unusual post-playing career path perhaps but Cockbain also spends his spare time indulging in one of his other great passions – fishing.

Cockbain’s second-row partner in that Grand Slam decider, Robert Sidoli, started every game of the 2005 Championship – five of the 42 caps he won for his country.

After retiring from playing in 2014, Sidoli went into coaching as a forwards coach for Pontypridd RFC, but left in 2017, and also taught at Newport High School, where he is rugby manager.

Another of the ‘three Grand Slams, four Six Nations titles’ club, Ryan Jones retired from rugby in 2015 due to shoulder injuries, having starred for Wales and the Lions.

The back-rower has transitioned into an incredibly successful post-playing career as he was appointed as head of participation with a duty to develop the community game by the Welsh Rugby Union before switching roles to become the WRU performance director.

During lockdown, he has hit the headlines by running a marathon in his back garden to raise money for the Swansea Bay University LHB charitable fund. 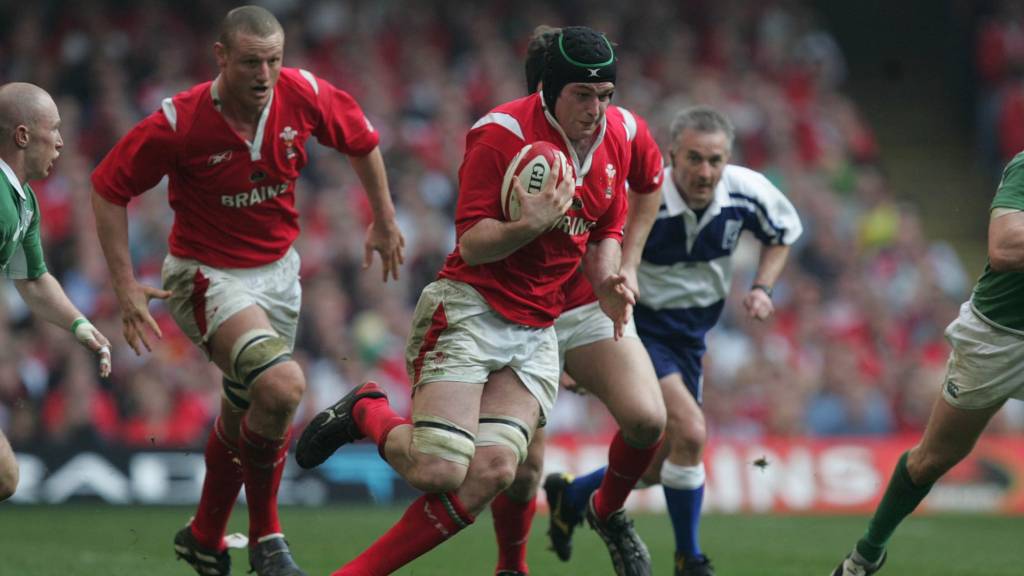 Nicknamed ‘Nugget’, Martyn Williams became the third Welshman to pass the 100-cap mark and won two Grand Slams in his career, as well as touring with the Lions on three occasions.

He retired from rugby in 2012 and did punditry for the BBC and Premier Sports before joining the Cardiff Blues board last August.

Then, at the start of this year, he became Wales team manager – succeeding Alan ‘Thumper’ Phillips, who spent 18 years in the role and will take up the same position with the Lions – with the 2020 Guinness Six Nations being his first campaign. 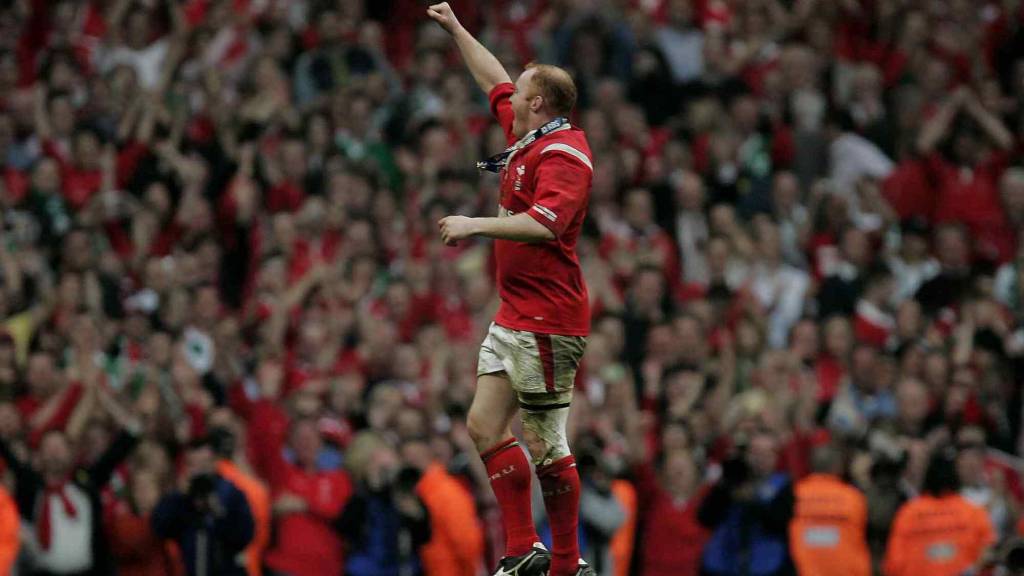 Michael Owen had the distinction of being the 100th man capped by Wales when he debuted against South Africa in 2002 and he co-captained the 2005 side to a Grand Slam alongside Gareth Thomas.

He would have earned more than his 41 caps but for a knee injury that forced him to retire aged 29, although he then embarked on a two-year masters degree in business at the University of Hertfordshire.

He coached at Hertford RFC, while also doing some commentary work during the 2011 World Cup, and then became director of rugby at Haileybury College in Hertford.

Co-captain with Michael Owen, Gareth Thomas was injured for the Grand Slam decider in 2005 but went on to pass the 100-cap barrier for Wales.

He came out as gay in December 2009 – becoming the first openly gay professional rugby union player – and last year revealed he is HIV positive.

A regular on the punditry scene, mainly with ITV, Thomas has also done huge amounts of charity work, annually appears in panto, completed an ironman triathlon last September and filmed a documentary with Prince Harry, Duke of Sussex and the Terrence Higgins Trust. 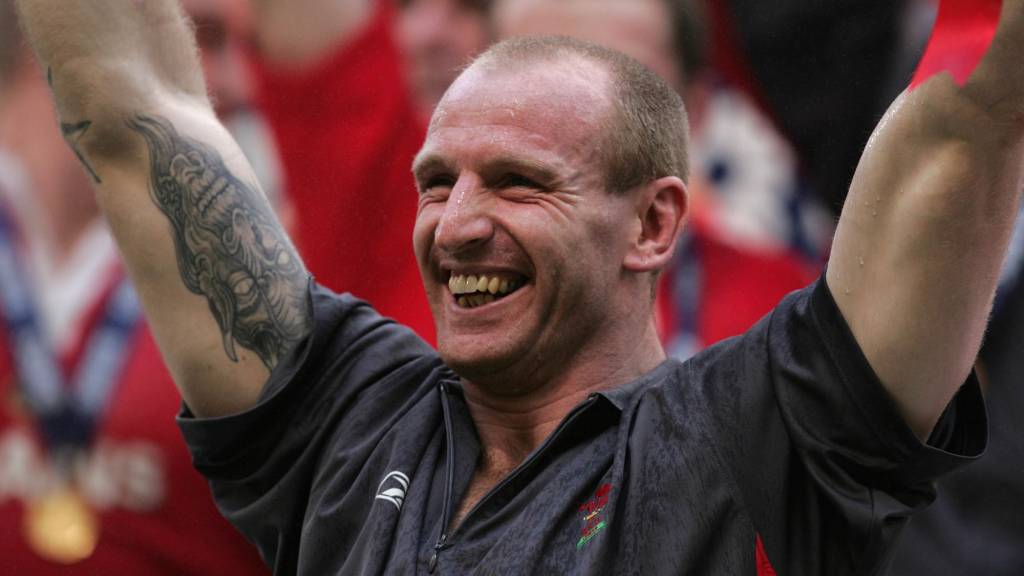 Fly-half Ceri Sweeney made 35 appearances for Wales during his rugby career and was still playing at a high level for Pontypridd RFC as recently as last season.

He runs a thriving business as the director of his own electrical services company and is also a Welsh international fisherman.

The hooker was at the end of his rugby career when he appeared off the bench against Ireland in 2005, retiring a few months later following back surgery.

He moved on to coach Scarlets Under-18s, then joined the Wales set-up and switched to Leinster last year. 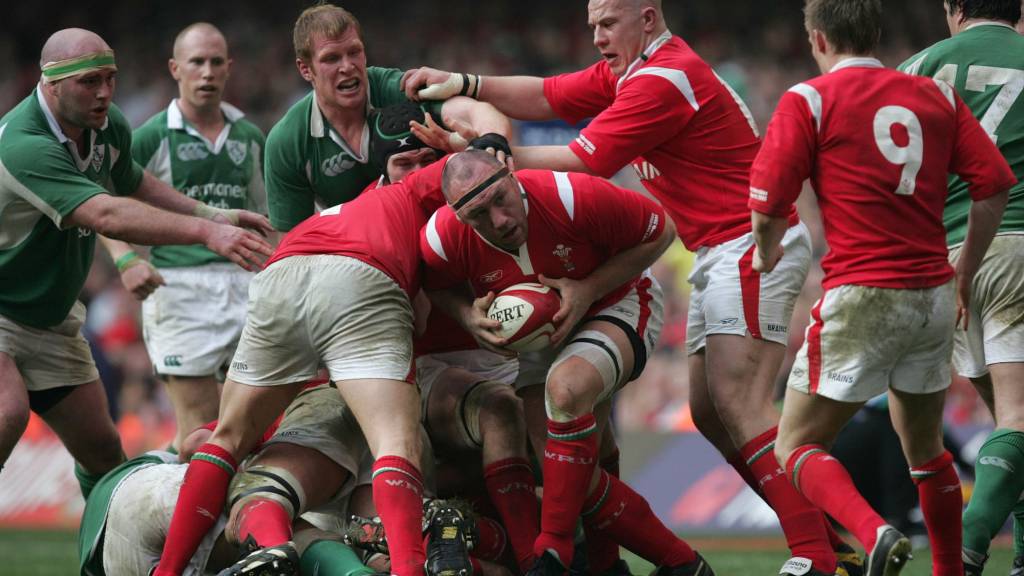 On the bench for that Ireland game, versatile back Sonny Parker was appointed as director of rugby at the amateur phoenix London Welsh side after they went into liquidation before moving to New Zealand.

Was just at the start of his international career when on the bench against Ireland in 2005 but went on to become a mainstay of the Wales side in the years that followed.

The scrum-half has been busy since retirement, DJing at the Royal Welsh Show, meeting rapper P Diddy, starting a rugby academy in Dubai and doing regular media work for a number of outlets.

Flanker Robin Sowden-Taylor – also on the bench against Ireland – was forced to retire aged 28 due to an ankle injury.

He only won seven Wales caps and worked for Dragon CrossFit in his retirement before becoming strength and conditioning coach at Cardiff Blues.