James Hook feels he could have achieved more in his international career with Wales but is excited for the post-rugby chapters after retiring from the sport.

Hook announced that this season would be his last back in January and his Ospreys contract has now expired, bringing to an end a 16-year senior rugby career that began with his debut for Neath RFC back in 2004.

The 34-year-old played 81 times for Wales between 2006 and 2015, accruing 352 points and winning two Grand Slams, as well as a third Championship title.

With that glittering CV, it feels absurd to suggest the versatile back under-achieved in a Wales jersey, yet that is exactly what the man himself believes.

“I probably feel I should have achieved more,” said Hook when initially announcing his retirement. “I played in a number of different positions. I started at outside-half, moved to 12, then to 13 and I played 15. That is pretty much the story of my career.

“Perhaps that was a factor. I was probably to blame at times as well by not performing and nailing down certain positions. That’s rugby.”

Now, his attention will turn to life after rugby and while Hook already knows he will miss certain aspects of the game, he now has different priorities.

Last week officially marked the end of my @ospreys_official playing contract and with it, my rugby playing career. I was hoping to finish off with a few more appearances but unfortunately, for obvious reasons, I wasn’t able to do that. I’m in the process of sorting out my first step onto the ladder post rugby, which, to be honest, I’m really excited about and this should be confirmed in the next couple of weeks. I’ll be staying in shape for my @jameshooktestimonial match which now looks likely to take place sometime during 2021. Thanks very much to everyone who has supported me through what has been an incredible journey. Thank you!

“A lot of my close friends at the Ospreys have retired and have had to retire early as well because of injuries,” added Hook.

“The nature of the game now is really physical. You play a game and it takes you three or four days to get over the bumps and bruises.

“I’ve got a young family. I’ve got three young boys, and a wife as well, and I want to be able to go in the garden and play and kick a ball about with them.

“I consider myself one of the lucky ones. There is more to life than rugby.

“But turning up to training and seeing the boys, and just things you take for granted that will be taken away.

“It’s going to be sad because I’ve played the game for so long but I want to stay involved in it and enjoy life after rugby.” 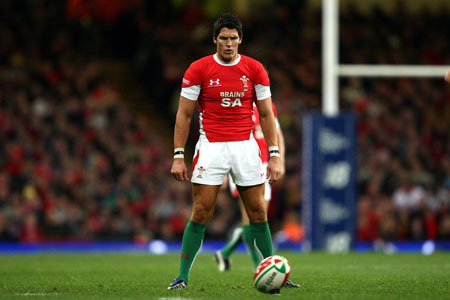 In addition to the well-trodden path of going into coaching, one of Hook’s other post-rugby plans is to become a children’s author.

He is preparing to release a series of children’s books centred around a young rugby player with dreams of reaching the top of the sport – with the first tome Chasing a Rugby Dream: Kick-Off, due for release this year.

And it’s an idea that came to the former Wales international while attending a book fair with his oldest son, Harrison.

“There was a book fair going on after school and he [Harrison] asked me if we could go and get a book – he wanted a rugby book,” said Hook.

“I was shocked really because there was no rugby book there. It was all full of football and a couple of other sports, so I said I’d get one online and there was nothing there either.

“I thought ‘there’s an opportunity here’ so I wrote a few ideas down and it developed from there.”