In the latest of our series looking back at classic encounters in Rugby’s Greatest Championship, this week we’re taking a look at a record-breaking weekend as Scotland hosted Ireland in 2015.

On a day that would soon go on to be recognised as Super Saturday, the climax to the 2015 Championship was about as brilliant a piece of drama as sport is capable of delivering.

Old pugilists England and France notched up 90 points in the conclusion at Twickenham but with an astonishing 27 tries scored across the Championship on the same day, Ireland had already done just about enough…

It is an often forgotten fact that – for the first time in the history of the Championship – four sides came into the final day with a chance of claiming the title.

France’s claim was admittedly a long shot. They needed both Wales – who faced Italy in the day’s opening match – and Ireland to lose, and to then give England a thumping the likes of which they had never before achieved on English soil.

To Rome for the first instalment of the day, with a 25-point deficit to England and a 21-point gap to Ireland, Warren Gatland’s side needed to run riot to secure the title and promptly obliged – eight tries scored in a 61-20 victory.

And Rory Best – busy warming up for Ireland’s clash with Scotland that would follow – recalls the mood in the Irish camp: “I think for us I remember watching, we caught most of the first half of the Wales game before we had to meet and go and Italy had started pretty well. 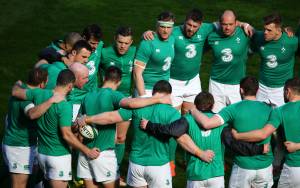 “You walk down the tunnel at the stadium and a couple of the pillars have TVs, so we’re going out to have a look around the pitch and all of a sudden it went from 13-12 to 50 or 60 and we’re going, we might need a few more points here…”

On to the pitch in Edinburgh then and Joe Schmidt’s Ireland now knew that only a 20-point margin of victory would be enough to overtake the Welsh.

“Joe came out and said, we thought we needed 15, now it’s going to be more like 20 or 21, that’s our difference now. It doesn’t change our process, just keep going about it,” remembers Best.

An early score for Paul O’Connell – a collector’s item indeed – and five points from the boot of Johnny Sexton, settled the Irish nerves.

Losing Euan Murray to an early injury did not help Scotland’s cause but Greig Laidlaw’s 17th-minute penalty did get them on the scoreboard at 10-3.

That was only a temporary stay of execution however as Sean O’Brien barged his way over moments later, a superbly-worked lineout move released the marauding flanker through the middle for the try. 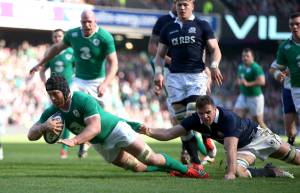 At that point, Welsh skipper Sam Warburton knew that his side’s race was run: “Outside of our changing room, there was a TV in the stadium,” the Welsh great said. “Ireland quickly went two tries up after 15 minutes, it was at that point I realised they would be able to put up whatever score they needed to make sure they won the Championship.”

Scotland responded, Laidlaw getting down the short side and fly-half Finn Russell was on hand to collect Adam Ashe’s clever pass to go over for the first try of his international career.

Ireland led 20-10 at half-time and didn’t waste any time extending the lead upon the restart, Sexton kicking three points to extend the lead to 13.

A third try for Ireland though seemed only a matter of time and it was Jared Payne who eventually provided it, his first for his country, as he cut back onto Sexton’s clever pass to go under the posts. 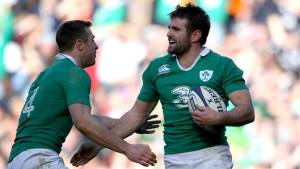 Tommy Bowe was denied in the right corner after Schmidt’s side cut loose again and then – after another Scottish infringement at the breakdown – Sexton slotted the penalty that put the men in green 33-10 in front, but more importantly ahead of Wales on points difference.
O’Brien then barged his way over from close range to increase Ireland’s lead, replacement Ian Madigan adding the extras.

Hogg thought he had notched Scotland a late consolation but the TMO spotted a knock-on following a superb covering tackle from Jamie Heaslip. 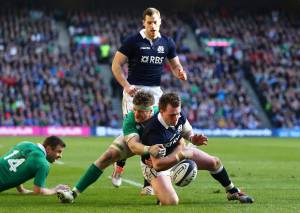 And although Madigan missed a last-gasp penalty to try and stretch the lead, Ireland’s impressive win ruled Wales out of contention and left England with too high a mountain to climb at Twickenham.

For Best it was a dream day – regardless of the results elsewhere: “We had a couple of big moments, Jamie (Heaslip) made a try-saving tackle on Stuart Hogg, and it’s one of those days where a lot of the stuff we’d executed and talked through during the week came off for us.”

Now attentions turned to Twickenham and England’s hopes of finally sealing the crown under Stuart Lancaster (England had finished second for the three years previous), with supporters all around Europe chewing their fingernails off in the knowledge that a 26-point swing would see England claim the Championship.

In keeping with the day, the tries in south west London flowed like a torrent right from the off, both England and France going blow for blow in a lung-busting affair.

Post-match in Edinburgh of course, Ireland were watching, as was the rest of the world, as England started to take some sort of control and edge towards that 26-point swing.

Jack Nowell touched down his second of the day late on to take England across the 50-point barrier for the first time ever against France – which left them just a converted score short of their target with five minutes left.

“To describe it as tortuous is probably being kind to how we felt,” commented Joe Schmidt. 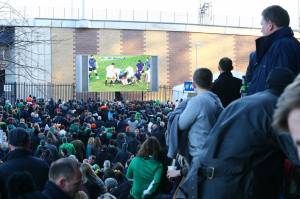 “It was see-sawing and getting closer and when Jack Nowell scored, then they got the driving line-out close.”

Twickenham was now alive as the hosts camped on the French line, all Lancaster’s side needed was one more converted try, but it wouldn’t come and Ireland were left to celebrate one of the most nerve-wracking titles in history.

Best continued: “When you retire and look back it will be one of the fondest memories that you have going out.

“The SRU keeping so many supporters, allowing them to come back into the stadium (BT Murrayfield) to greet us, it was unbelievable, the atmosphere there with the lights going black. 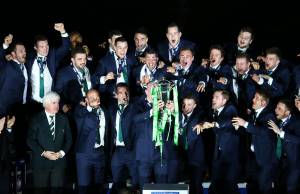 “We walked out and it seemed like there were people everywhere so to lift the trophy in that was amazing.”