It was all or nothing in Dublin on the final day of the 2003 Championship as both England and Ireland sought a Grand Slam victory.

Under Clive Woodward, the Red Rose were attempting this feat for the fourth time in five years, having lost on the final day in 1999 to Wales, 2000 to Scotland and in 2001 to the Irish.

England’s Grand Slam triumph paved the way for their finest moment in rugby history, that famous summer and that Johnny Wilkinson drop-goal to win the World Cup.

Ireland were hunting their first Grand Slam in 55 years and only their second ever having narrowly beating Wales at Principality Stadium the week before thanks to an injury-time drop-goal from Ronan O’Gara.

England had comfortably seen off Scotland, running in five tries at Twickenham to set up the perfect showdown in Dublin on the last weekend. 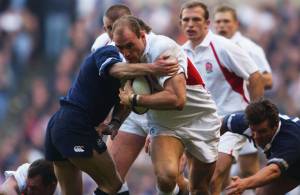 There was drama even before the game had kicked off at Lansdowne Road as England captain Martin Johnson led his team out to the wrong side for the national anthems and refused to move when asked, forcing the Irish President Mary McAleese to walk across the grass in order to shake the players’ hands.

O’Gara’s heroics against Wales weren’t enough to secure him a starting place, as Ulster’s David Humphreys was chosen to pull the strings by Ireland head coach Eddie O’Sullivan.

The only two changes to the starting line-up came in the pack as Gary Longwell replaced Leo Cullen in the engine room and Victor Costello came in for Alan Quinlan in the back row.

Woodward stuck to his guns and the only changes from the squad that breezed past Scotland was Dorian West and Kyran Bracken replacing Mark Regan and Andy Gomarsall on the bench.

Humphreys struck the first blow of the contest with a drop-goal that signified Ireland’s intent after just five minutes.

England had the perfect response though, with Matt Dawson darting through the Irish defence to set up Lawrence Dallaglio under the posts.

Fly-half Humphreys then closed the gap to a point with a penalty, before Wilkinson slotted a drop-goal of his own on the half-hour mark, then nailed another just before half-time to send the visitors into the break with a 13-6 lead. 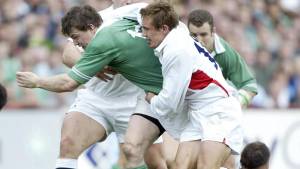 Mike Tindall was next to add points, taking a crash ball straight through a gap to bundle over.

England ramped up the heat as Ireland began to crumble, with Will Greenwood forcing his way over with 15 minutes to play and then again with an intercepted try to seal victory. 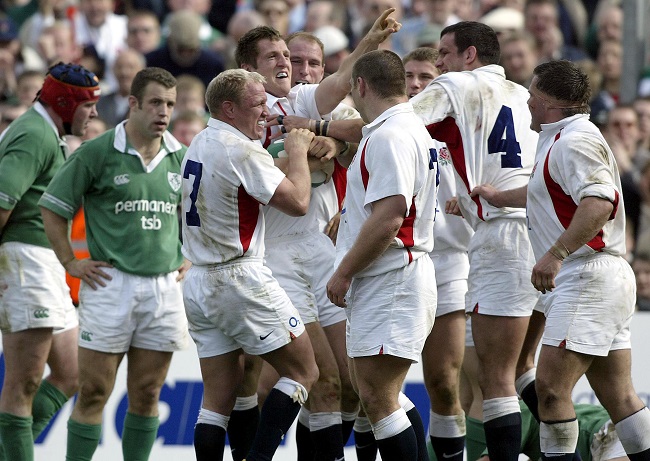 Between those two tries, Wilkinson added another three points to finish the tournament as the leading points scorer.

A fifth try in injury time was the nail in the coffin, as some lightning-quick hands from Wilkinson in the middle created space out wide for Dan Luger to race in unchallenged.

It was the first of many successes for that England team as they lifted the Grand Slam trophy for the first time since 1995, while Ireland would have to wait another six years for the achievement.

Ireland head coach Eddie O’Sullivan: “We played very well in the first half but we needed a score before half-time. We threw everything but the kitchen sink at them but instead they hit us with a drop goal.

“They strangled us out of the game in the second half. Their pack controlled the game and we couldn’t get the ball”. 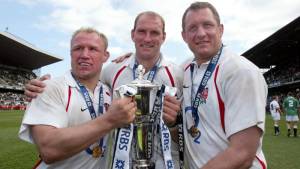 England head coach Clive Woodward: “I can’t say how good these guys are. They are the toughest guys I have ever worked with, physically and mentally

“I was confident we were going to win, if we held on to the ball. Ireland are a good team but I am delighted with the outcome. The players deserve this big time. I’m lucky to be leading them.”