After Simon Danielli in 2004, Scotland endured a remarkable 14-year wait without a try against England at BT Murrayfield – in 2018 that all changed, and in some style.

Against an all-conquering England side who had followed up a Grand Slam in Eddie Jones’ first year in charge with a second successive Championship, the Scots produced a blistering display.

It was one that few people saw coming, although John Barclay enjoyed his Nostradamus moment when he tipped Finn Russell to star before the game.

The Scotland fly-half had endured a tough start to the campaign, struggling away in Wales on the opening weekend before a patchy display in a win over France.

He kept his place though, and the faith of his skipper Barclay.

“He’s had some games when he’s not played as well as he could. He typically bounces back. I’ve seen him not play his best game then typically next week he’s made man of the match.” – John Barclay

That proved one of the more prophetic pre-match statements in the history of the Calcutta Cup, as Russell pulled out all his magic tricks in a 25-13 success at BT Murrayfield.

The pick of the bunch were his two stunning passes to set up Sean Maitland’s try on the half-hour on a day when everything the mercurial fly-half tried, came off.

He was far from the only Scot to shine, and it took a team effort to hand Jones only his second Championship defeat in his 13th game in charge.

The back row fetchers were dominant at the breakdown, Huw Jones continued his fine scoring record against England and Stuart McInally produced an all-action display to cap off the victory.

Jones came into the game unworried about the Scottish preparation, but it clearly worked. 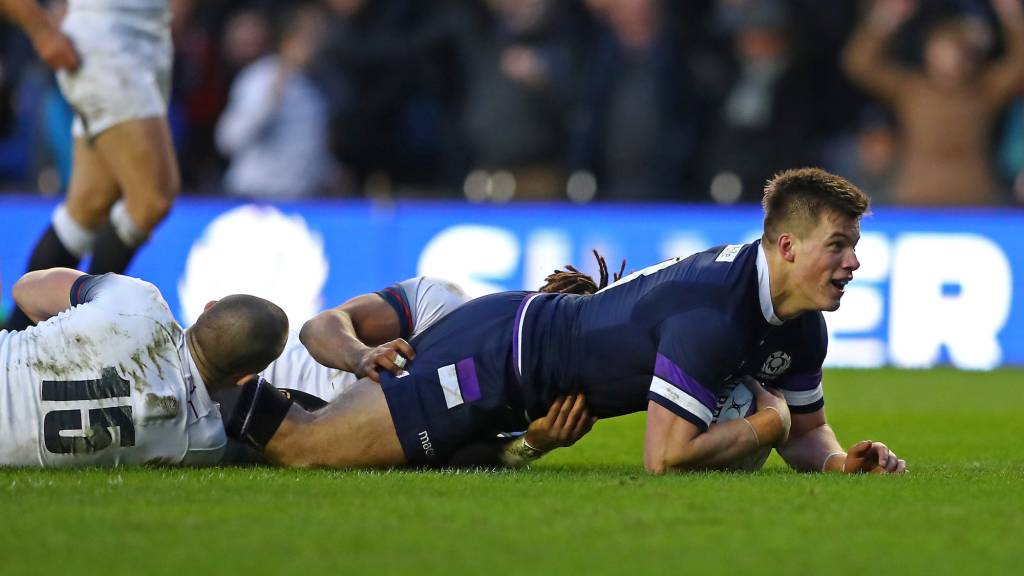 “They have brought out every strategy you can think of. It’s designed to get them up for the game. We’re up for the game, regardless of what’s said.” – Eddie Jones

The turnover battle was a key factor in the outcome, with Grant Gilchrist setting the tone in the third minute by earning a penalty that Greig Laidlaw slotted.

England drew level thanks to an Owen Farrell penalty, but a minute later, Scotland struck with the first try of the game. Russell caught the England defence cold with a clever grubber kick, Jones was able to nudge it on and collected to go over.

That was the first Scotland try in Edinburgh in the Calcutta Cup since 2004, although in that period they had won two and drawn one of the six meetings with the Auld Enemy.

Laidlaw converted, and despite a second Farrell penalty, Scotland led 10-6 with half an hour gone.

The next seven minutes swung the game definitively to the home side. 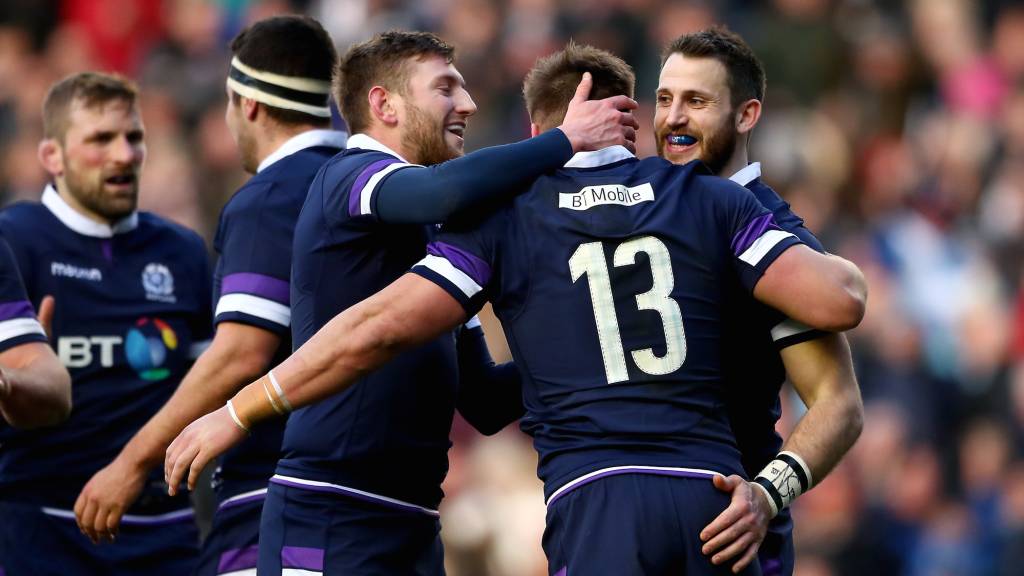 First, from just outside his own 22, Russell threw one of the most audacious passes you will see, missing out two men and putting Jones through a gap and away. The centre got up to the England 22, and when the ball was recycled and came back left, Russell threw another miss-pass, skipping just one person this time, to put Maitland into the corner.

Jones had another try to his name before half-time, running a fine line off Laidlaw’s pass and then holding off Anthony Watson and Mike Brown to go in from halfway.

At 22-6, Scotland were in control heading into half-time.

England responded, with Farrell running a similar line to Jones as he burst through shortly after half-time, and it seemed he might have a double on 54 minutes when he and Watson combined on a breakaway score. It was called back for a knock-on in the tackle by Courtney Lawes though, and Scotland breathed a sigh of relief.

England still trailed by nine, and then lost Sam Underhill to the bin for a no-arms tackle, with Russell taking over kicking duties and adding the extras.

Despite the 12-point deficit, England were still chasing hard, but a turnover penalty on his line by McInally stopped their momentum two minutes from time, and it was Scotland who were able to celebrate.

“It’s unreal for us. We had a game plan and we executed it really well. It’s been a tough couple of weeks but I’ve still enjoyed all the games, especially this one.” – Finn Russell

There were plenty of contenders, but Russell deservedly earned the Player of the Match honours for his display, answering all the questions that had been asked in the build-up.

In doing so, he lived up to his captain’s pre-game tip.

“I predicted he’d be man-of-the-match, that’s the nature of the guy. He plays on the line and he was outstanding today.” – John Barclay

As well as Russell’s ability to attack the English defence, it was the breakdown that really hurt the visitors, with Jones admitting as much after the game.

“Scotland dominated from the start and we were a bit passive – at the breakdown especially. We have to look at that. We were poor and gave them a lead.” – Eddie Jones

“We didn’t match their intensity. It’s very raw at the moment and this has to be part of our journey. We have to learn from this.” 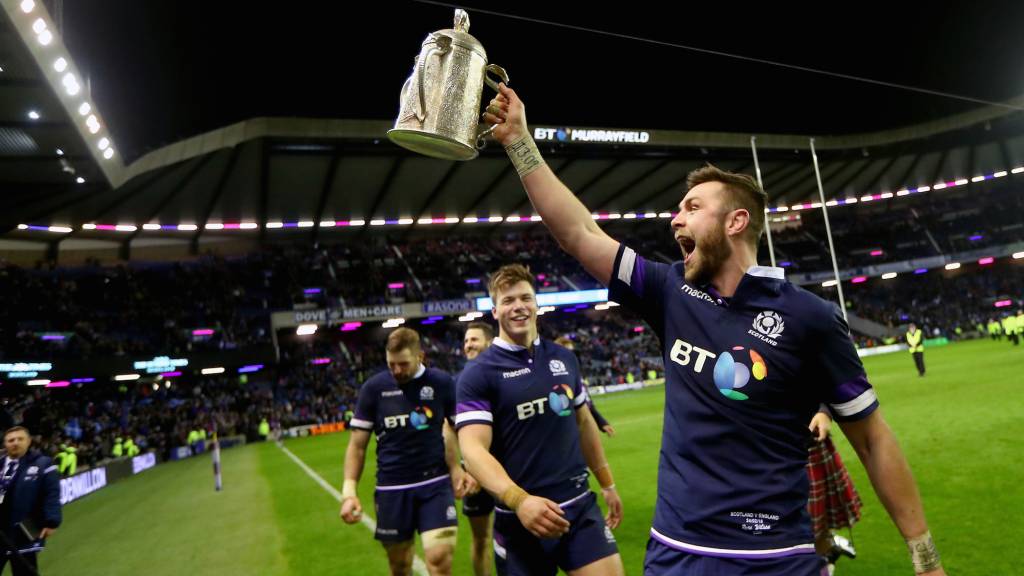 England did go on to learn from it, and 18 months later reached the World Cup final in Japan with two jackaling back-rowers of their own in Sam Underhill and Tom Curry.

The immediate aftermath was not as successful, however. Despite the loss in Edinburgh, their title hopes remained, but they were extinguished in defeat to France in Paris, followed by a home defeat to Grand Slam-chasing Ireland.

Scotland, meanwhile, saw their own hopes of winning the title ended in Round 4 in Dublin, before Laidlaw’s last-gasp penalty earned victory and a third-placed finish in Rome.

It was one of the great Calcutta Cup victories for Scotland, who would go on to retain the famous old trophy a year later at Twickenham in an even more extraordinary encounter.