France are the last team to have won back-to-back Grand Slams, and they were also the first to complete a clean sweep in the Guinness Six Nations era.

They came into that 2002 campaign as challengers, but it was Sir Clive Woodward’s England who would have hoped to finally get over the line after falling at the final hurdle for three years running.

While England did go on to claim that elusive Slam a year later, in 2002 it was Les Bleus who were smiling, winning Le Crunch in Paris in Round 3 to take control of the Championship.

By that point they had already beaten Italy at home and Wales in Cardiff in a thriller.

They followed victory over England with a success away in Edinburgh over Scotland, leaving themselves a home clash with Ireland to make history.

They did so in style, producing a stunning display on a glorious afternoon as they ran in five tries in a 44-5 victory.

Eighteen years on, some of those involved that day remain important actors within the French set-up, while others have ventured into very different fields. 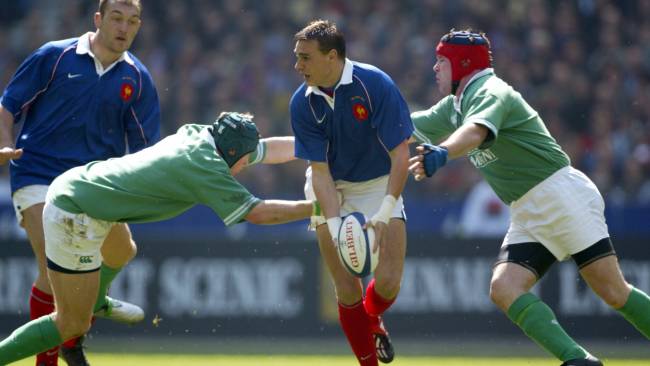 15. Nicolas Brusque – An elegant full-back, Brusque scored two tries in the clinching success against Ireland and would go on to be part of the French side that won a second Grand Slam two years later. He retired in 2010 and has since served as president of his club Biarritz. He is also co-founder of property company Le Concept Immobilier. 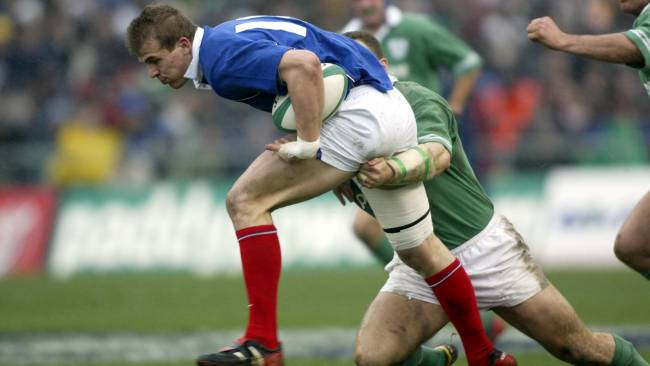 14. Aurélien Rougerie – The last player from the group to call time on his career, Rougerie finally called it a day in 2018 after playing his part in three French Grand Slams, the last of which came after he switched from wing to outside centre. He also played 418 times for club side Clermont Auvergne where there is now a statue in his honour. Rougerie runs Hpark, a large area in Clermont which includes a restaurant, pub and sports centre. 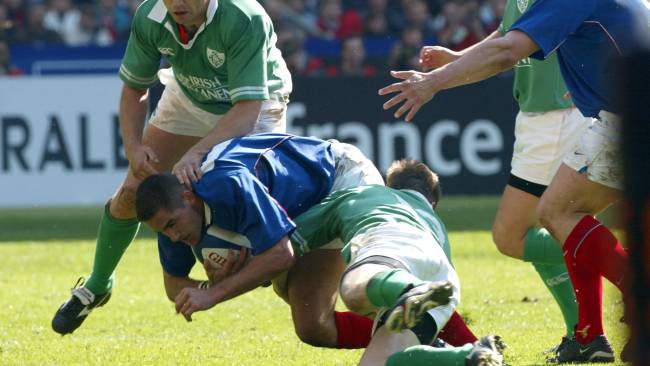 13. Tony Marsh – The New Zealand-born centre was a key figure in France’s success before recovering from testicular cancer in 2003. He has since returned to New Zealand where he is an entrepreneur having also worked as a strength and conditioning coach for New Zealand squash.

12. Damien Traille – The versatile Traille played across the backline for Les Bleus but was probably most successful at inside centre. His final international match was the 2011 World Cup final, and he retired from the game in 2016. Since then he has become an ambassador for jam company Francis-Miot, whose co-founder Jean Othax signed Traille up for his first professional rugby contract.

11. David Bory – Another member of the backline from Clermont, Bory spent ten years at the club from the Massif Central before spells at Castres, Bath and Brive. He retired from rugby in 2009 and has since gone into the world of fitness, running two fitness centres. 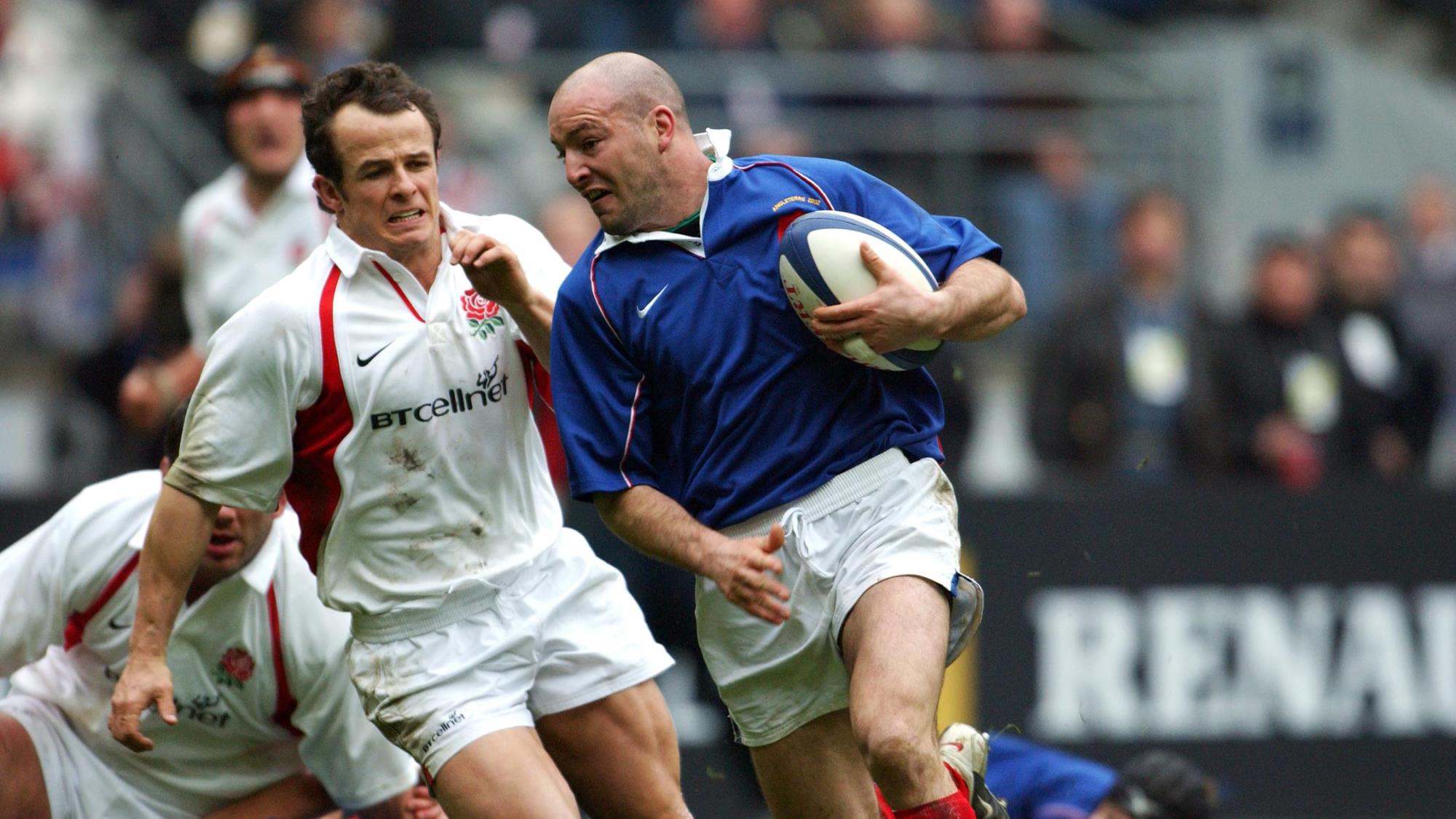 10. Gérald Merceron – Continuing the Clermont theme, Merceron pulled the strings for Les Bleus in the 2002 campaign, finishing as the Championship’s top points scorer. He retired in 2008 and decided to turn his hand to chocolate, working for Chocolatier Yves Thuries. 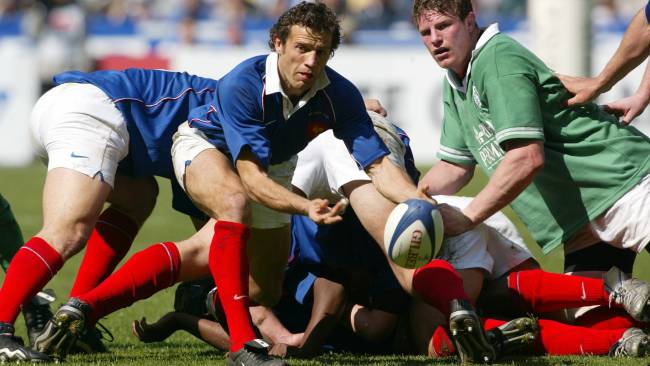 9. Fabien Galthié – The captain of the side and voted World Player of the Year as France enjoyed great success. Galthié retired from rugby the following year after the World Cup and went into coaching where he enjoyed immediate success with Stade Français. Having spent time working in the media, he is now the head coach of the French team, having taken over in 2020.

1. Jean-Jacques Crenca – The veteran prop was part of the French Grand Slam successes in 2002 and 2004 before eventually retiring in 2007. He went into coaching, working as forwards coach at Agen for three years, while he also coached alongside 2002 teammate François Gelez with Algeria. 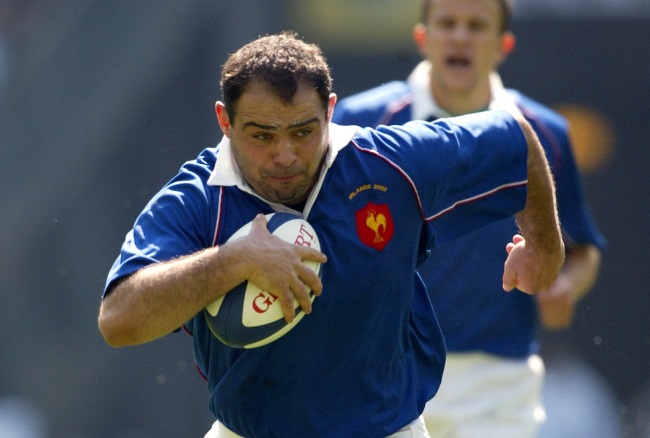 2. Raphaël Ibanez – The former France skipper won four Championship titles, including this, his second Grand Slam. He finished his France career with 98 caps before going onto work as manager of Bordeaux and now the France team alongside Galthié. He has also worked extensively as a pundit with France Télévisions. 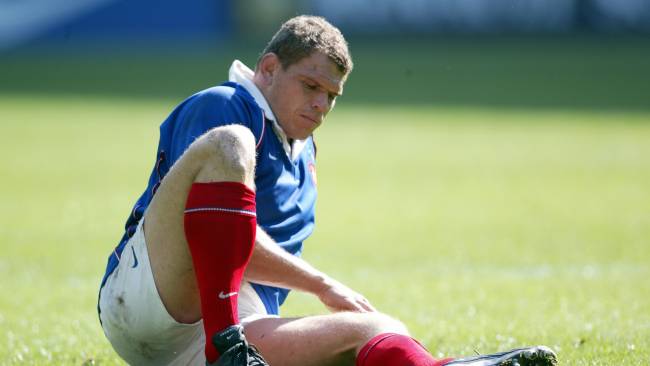 3. Pieter de Villiers – De Villiers was a key part of the French teams in the late 1990s and early 2000s, winning 69 caps and twice claiming the Grand Slam. After retiring in 2008, he returned to his native South Africa and has gone into coaching. He worked as scrum coach for the Springboks and Stade Français, while he now fulfils the same role with Scotland.

4. Fabien Pelous – France’s most capped player of all time, Pelous is one of just three men to have been part of four Grand Slam-winning sides since the Second World War, alongside Jason Leonard and another member of this team. He won the last of his 118 caps in 2007 and retired from the sport in 2009. He has since worked as team manager for French age group sides, served as the sporting director of Toulouse and is also a local councillor in his town Garidech. During the Coronavirus pandemic he helped deliver food to those who could not get to shops.

5. Olivier Brouzet – Pelous’ long-term second-row partner, won 72 caps for France, featuring in both the 1998 and 2002 Grand Slams. He retired in 2005 and since 2007 has worked alongside president Laurent Marti at Union Bordeaux-Bègles. 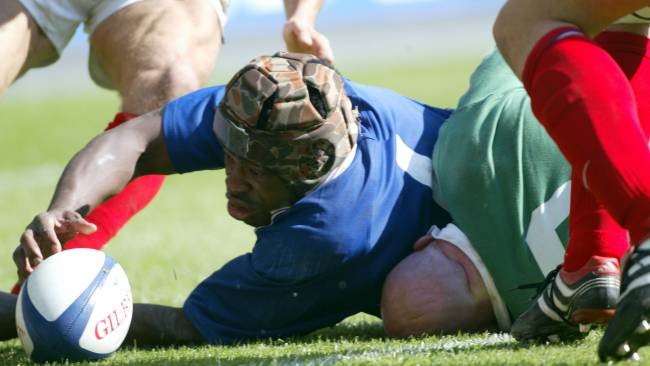 6. Serge Betsen – The scorer of the first try, one of two, in the win over Ireland, Betsen was a key figure in the French back row for nearly a decade, winning two Grand Slams. He retired in 2012 after a successful spell in England with Wasps, and has since launched the Serge Betsen Academy, which uses rugby to help underprivileged children in Cameroon. He also runs Serge Betsen Rugby, coaching youngsters in London while he received the Légion d’Honneur for his charity work in 2017. He has also run Serge Betsen Consulting since 2008. 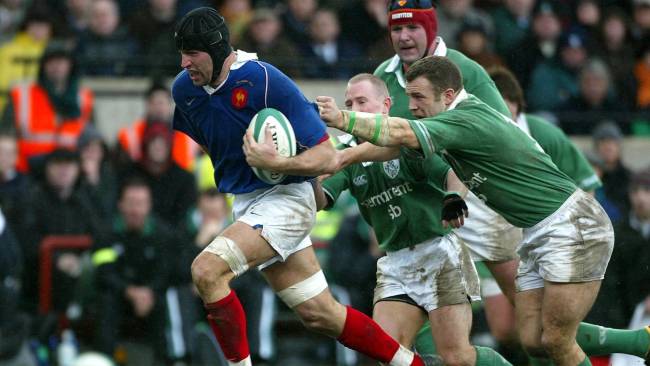 7. Olivier Magne – The other member of the four Grand Slam club, Magne was one of most dynamic back-rowers of his generation. The flanker retired in 2007 before going into coaching, notably with the French age group sides and for a short period, the Greek national team. He has also worked as a pundit for TF1 and Eurosport and has a column in L’Equipe. 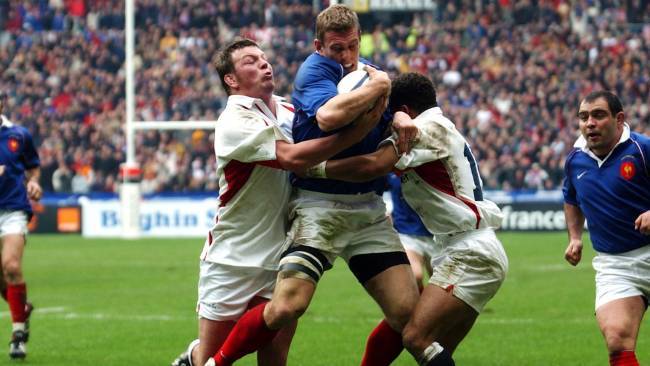 8. Imanol Harinordoquy – The third member of the great French back row, Harinordoquy burst onto the scene in 2002, going on to win further Slams in 2004 and 2010. He retired from rugby in 2016 and now runs the wine bar ‘Les Contrebandiers’ in Biarritz. He opened another wine bar in Pau while the concept is set to be made into a franchise.

Olivier Azam – Former hooker Azam has gone into coaching since retirement and currently works as scrum coach with the Dragons in the Guinness PRO14.

Jean-Baptiste Poux – The vastly experienced prop retired in 2018 and now serves as scrum coach at Bordeaux-Bègles.

David Auradou – Second row Auradou is another who has gone into coaching, most recently at Mont de Marsan in Pro D2.

Rémy Martin – After retiring in 2015, Martin has gone into retail, and is a director of two shopping centres.

Pierre Mignoni – The scrum-half is currently the director of rugby at Top 14 side Lyon.

François Gelez – Gelez has gone into coaching and was recently appointed head coach at Tyrosse in the French third flight. 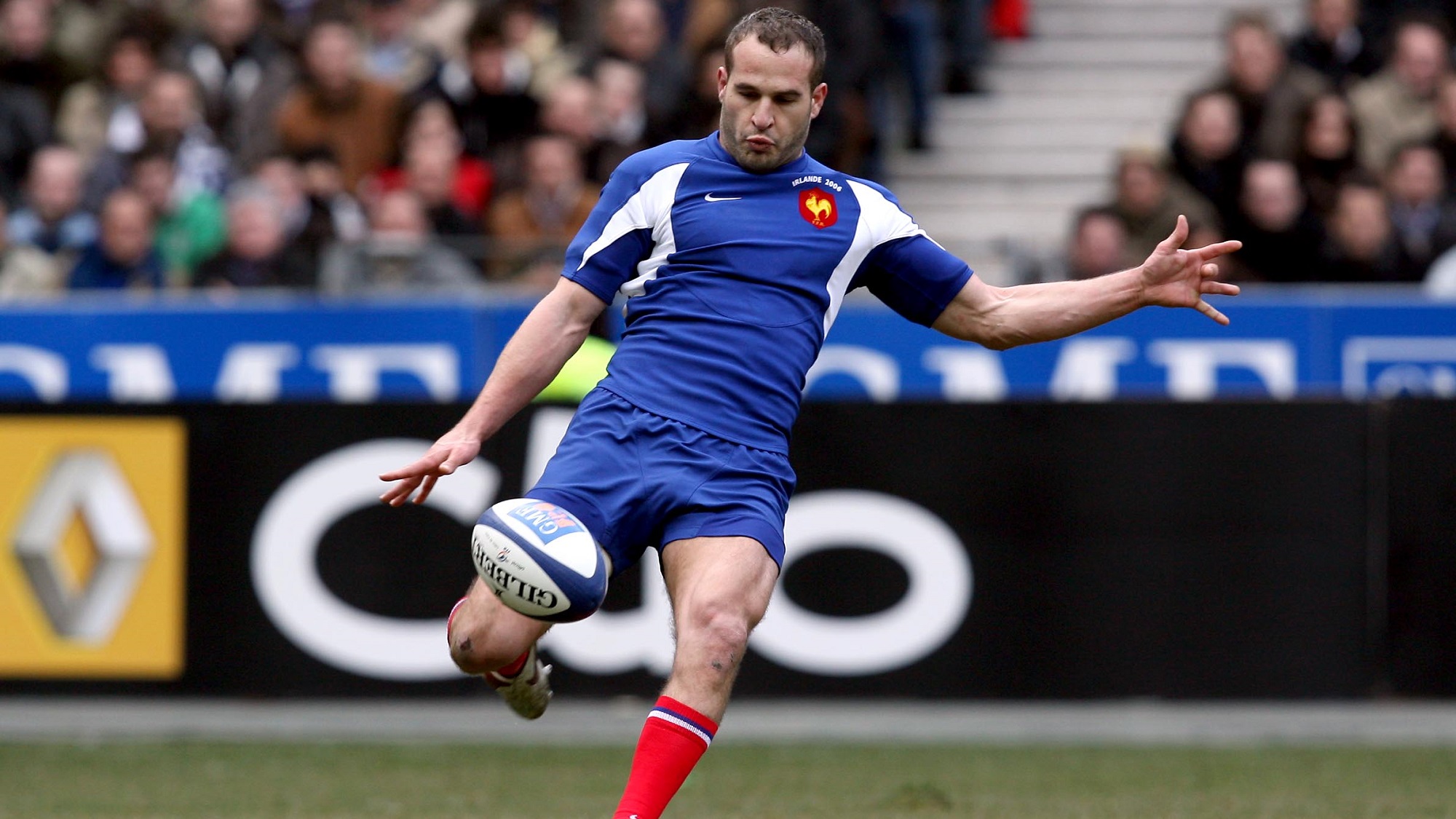 France used 32 players in total over the course of their five matches. Others who featured in the campaign were Frédéric Michalak (above), the country’s all-time record points scorer and recently an advisor at Lyon. Full-back Xavier Garbajosa is the head coach at Montpellier, while Yannick Bru is director of rugby at Bayonne. Lastly Nicolas Jeanjean, another full-back, is the strength and conditioning coach with Les Bleus. 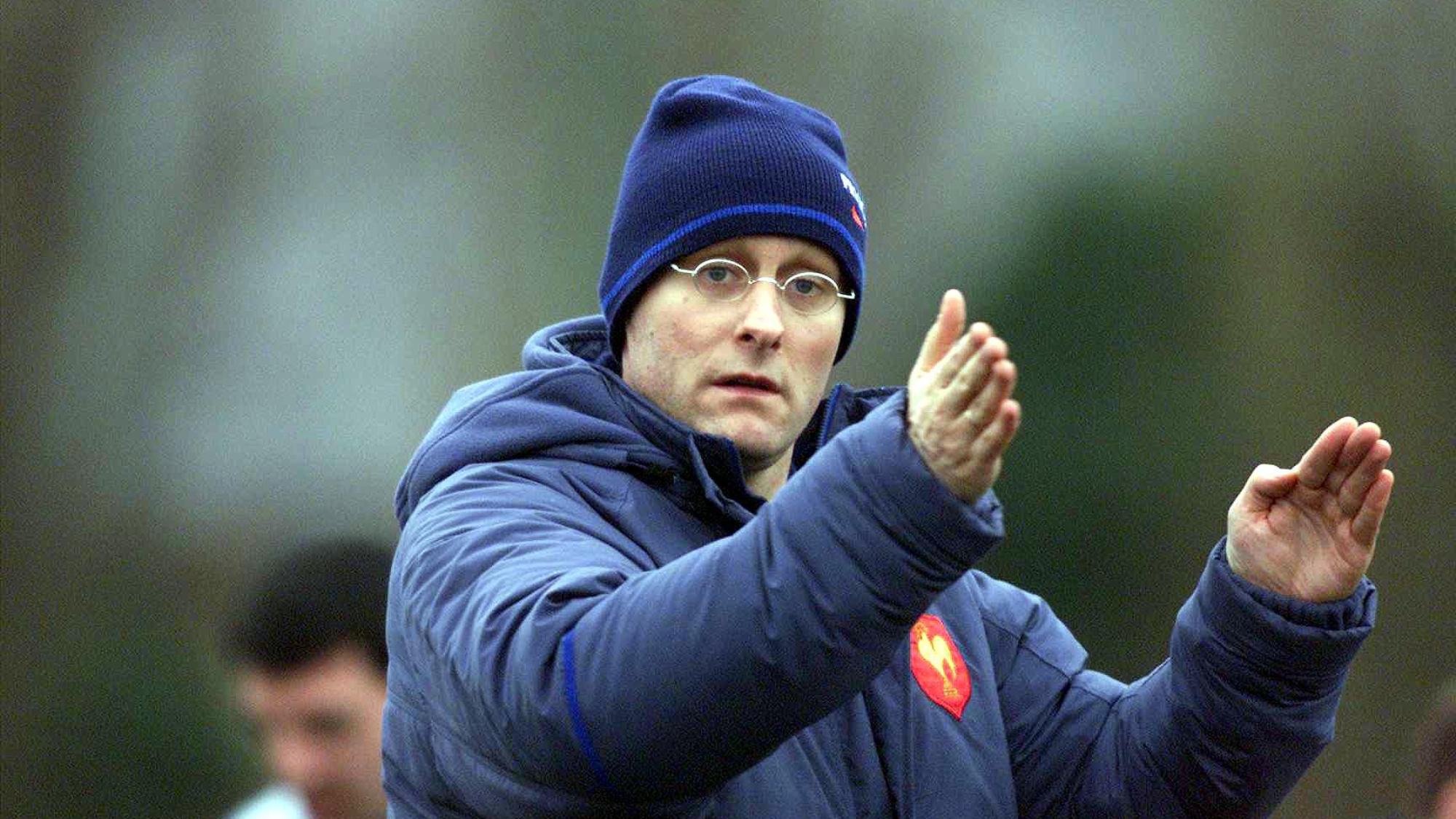 Coach: Bernard Laporte – Laporte remained France coach until 2007, winning two Grand Slams, two further Championship titles and reaching the World Cup semi-finals on two occasions. He then went into politics serving as sports minister before returning to rugby and leading Toulon to three successive European titles. He is now the president of the FFR.