It’s 30 years since Tony Stanger planted the ball down for a try that sealed the 1990 Five Nations Grand Slam, and it remains perhaps the most famous try in Scotland’s history.

In a Championship packed with rivalries, there is still something unique about the Calcutta Cup and, though England have enjoyed the better record of late, Scotland’s 1990 triumph will always stand-out on a day where both teams went in to the match dreaming of the Grand Slam.

The 13-7 win at a packed-out BT Murrayfield secured Scotland’s third, and most recent, Grand Slam, while they have won just one Championship since.

Today, some of those players are still involved in rugby, while others have ventured into very different fields.

One of Scotland’s greatest players, full-back Gavin Hastings won 61 caps and toured twice with The British & Irish Lions, including as captain in 1993. It was his kick that set-up Stanger’s try against England, while he also kicked a penalty against France. After retiring, he became chairman of PRO14 side Edinburgh Rugby and also launched a consultancy business. His son, Adam Hastings, is a current Scotland international. 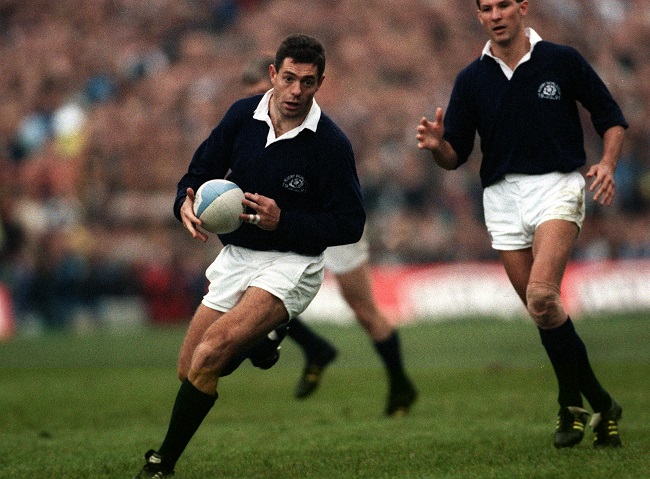 There’s surely not a bar in Scotland where Stanger couldn’t walk into and have a pint bought for him. His famous try defeated England and secured the Grand Slam, his only try of the Championship. Stanger won 52 caps in all and played at two World Cups, while after playing he coached at English sides Leeds Carnegie and London Irish. Between 2008-2015, he worked as a talent manager with the Scottish Institute of Sport and has recently started his own business – Stanger Pro.

The younger brother of full-back Gavin, Scott Hastings is also a Scotland great and won 65 caps for his country. Lightning quick and with the ability to break the gain line with impressive regularity, he was a key piece of Scotland’s success. Since retiring, Hastings has worked in media as a freelance commentator for the likes of BBC, Sky Sports and ITV. He is also a public speaker. 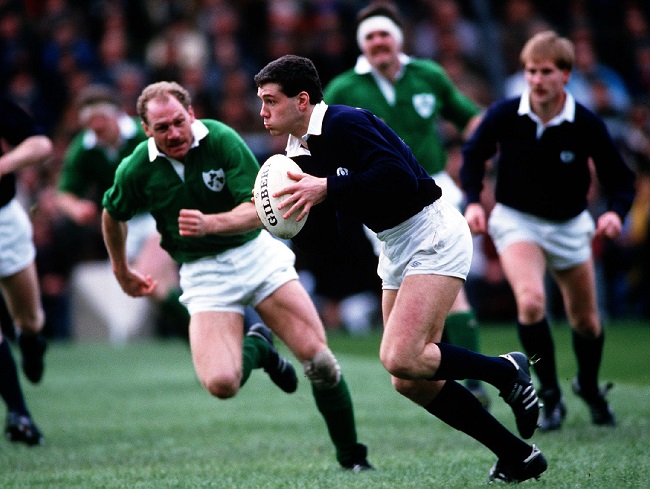 New Zealand-born centre Sean Lineen won 29 Scotland caps and was the perfect partner for Hastings in midfield. His last Scotland cap came just two years after that Grand Slam success and he’s since forged a successful coaching career, working with Glasgow Warriors for six years and latterly London Scottish. In 2020, Lineen coached the Scotland Under-20s side in the Six Nations.

Speedy winger Tulako scored the second try in Scotland’s 21-0 win against France, one of 15 tries he bagged for his country in 37 appearances. The son of a Ukrainian father and Italian mother, he was born and educated in Edinburgh and became one of their greatest wingers. His hat-trick against Ireland in 1989 was Scotland’s most recent Championship treble until Blair Kinghorn did the same against Italy in 2019. With a degree in civil engineering, Tukalo worked as a sales director for an energy firm.

At just 21, Chalmers carried a huge responsibility at fly-half but his goal-kicking was superb throughout the Championship. He nailed nine penalties and three conversions, including three key penalties against England. He retired in 2005 and went onto coach English teams Chinnor and Esher, before moving to work for a security firm. He won 60 Scotland caps, with his last coming in 1999. 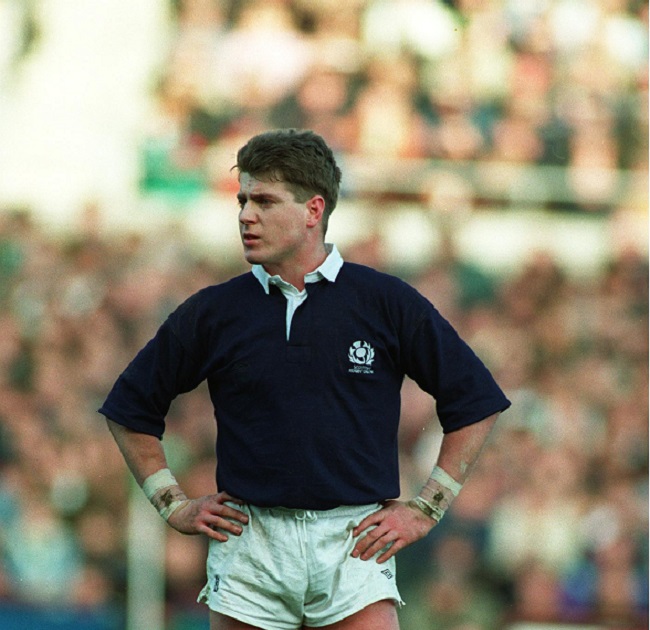 Named by the Herald as Scotland’s greatest ever player in 2015, Gary Amstrong’s place among the greats has long been assured. Ever alert, his ability to make breaks from around the fringes was uncanny and he was a dangerous threat throughout the 1990 Championship. He later captained Scotland to the 1999 Five Nations title and retired after the World Cup that year. A former lorry driver in the amateur era, Armstrong returned to the lorry business after his rugby career ended while also trying his hand at farming.

The captain of the team, prop David Sole is best remembered for leading Scotland to victory in that Grand Slam decider. His international career only lasted two more years and since retiring he’s worked as a commentator for BBC Scotland. He also became managing partner of School for CEO in 2017.

Milne’s Scotland debut came just a year before Scotland’s Grand Slam triumph and he ended up with 39 caps and a call-up to the 1993 Lions tour. His brothers Iain and David also won Scotland caps but it was just Kenny who was part of the Grand Slam side. He worked as a van driver during his career and since retiring has built up a successful printing company. 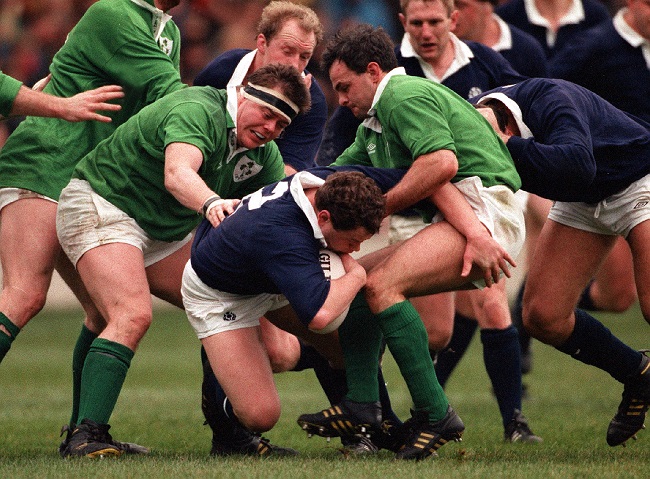 Along with Armstrong, Paul Burnell was part of the Scotland team that won the Grand Slam in 1990 and the Championship nine years later. After retiring he returned to the City, working initially in waste recycling and is now a partner at Redgrave Partners. He is also involved on the board with London Scottish.

Gray’s international career lasted just two years but he packed in 22 caps and a Grand Slam. The lock played club rugby for Edinburgh Academical and Nottingham, where he set up shop as a dentist.

A powerful lock, Cronin also toured with the Lions in 1993 and won 45 caps for Scotland. He scored Scotland’s only try in their 13-9 win away at Wales and went on to play in two World Cups. He is now a director of a flooring company.

Nicknamed ‘The Great White Shark’, John Jeffrey became Scotland’s most-capped flanker in the early 1990s. He won 40 caps and also toured with the Lions in 1989, alongside his fellow Scottish back-rowers Finlay Calder and Derek White. A farmer, he says his one regret is that he can stand on a hill and see England. Has also appeared as a pundit for BBC Scotland and sat on the World Rugby Council.

Calder scored Scotland’s first try in their 21-0 win against France, one of just two for his country. The 1989 Lions captain won 34 caps and is best remembered for maximising his talent and his never-say-die attitude. He was elected chairman of Stewart’s Melville in 2018. 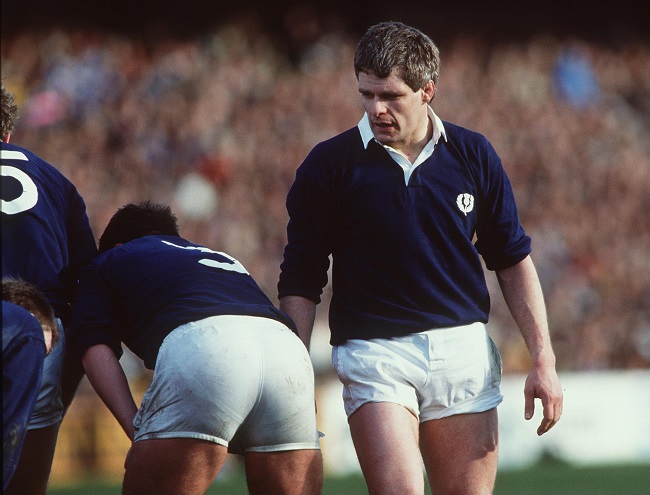 Big, bulky and quick, Derek White was a force to be reckoned with at No.8, scoring 11 tries in 42 Scotland appearances. His ten-year international career brought two World Cup appearances and a 1989 Lions tour. Since retiring, White has enjoyed a second career as an independent financial adviser.