The first step towards a Grand Slam can often be the hardest.

Wales came back from the dead to beat England in Round 1 of the 2008 Championship and also overturned a 16-point deficit to roar back and beat France 11 years later.

On both occasions, that momentum helped propel them to the Grand Slam – and in 2018 it was Ireland’s turn to do something equally special.

Paris was the scene for the pivotal moment of the 2018 Six Nations and Johnny Sexton the man who delivered it, with a 45-metre drop goal at the end of a 41-phase move that clinched Ireland a famous victory over Les Bleus.

After that, there was no stopping them.

For Ireland, it was a moment that re-established them as serious Championship contenders.

After a quarter-final exit at the 2015 World Cup, they struggled to recapture the form that led them to the 2014 and 2015 titles, winning just two of their five Championship matches in 2016 as England eased to the crown.

The autumn brought that victory against New Zealand in Chicago but the 2017 Championship also had its ups and downs, with away defeats at Scotland and Wales denying Ireland any chance of silverware before the business end of the campaign.

Still, they beat England 13-9 in Round 5 to deny them the Grand Slam. It may not have made a difference to where the title was headed, but it was a performance full of the qualities that has underpinned Ireland for much of the last decade: physicality, intelligence, resilience.

It set them up for a 2-0 summer series win in Japan, although many of their established stars were away with the Lions, allowing a new crop to develop into Test-ready players.

In the autumn, they cranked it up a notch by beating South Africa by 35 points and securing home wins against Fiji and Argentina. Come 2018, they were ready to compete for the Championship again.

However, a trip to Paris is always daunting – especially in Round 1. It was going to need something special to win.

Sexton kicked three first-half penalties to help them to a 9-3 lead, while a fourth looked decisive in a low-scoring affair. 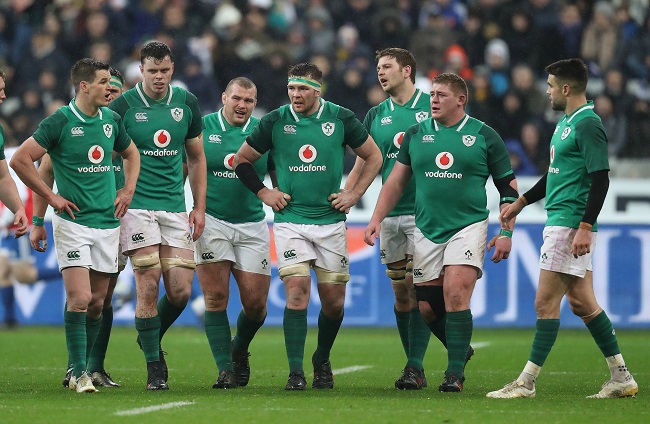 Neither side appeared likely to score a try in the driving Paris rain and, at 12-6 up, Ireland looked to have victory in the bag.

But France, as they so often do, suddenly came alive and put together a counter-attacking move that was as unexpected as it was brilliant.

Antoine Dupont’s side-step and pass was too slick for Conor Murray, and Teddy Thomas burst down the right, cut inside full-back Rob Kearney and sprinted away to the line.

Ireland were behind and, when Anthony Belleau lined up a long-range penalty in the 77th-minute that could have put France four points clear, the chances of an Ireland win were bleak.

However, he missed it. And Ireland had one more chance to go up the other end.

In the last minute, Ireland received the ball deep inside their own half and set about making in-roads in an attempt to get close enough to set-up Sexton for a drop goal or win a kickable penalty.

France’s task was simple. Win the ball back, via a legal turnover, penalty, or knock-on, and the game was done.

Devin Toner, Iain Henderson, Jack McGrath and CJ Stander all got carries, pounding into the wall of blue in front. 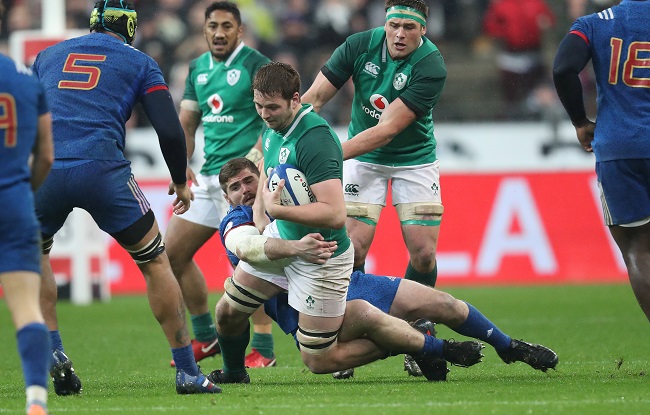 As the clock ticked into the red, Sexton decided to go for it, hurling a cross-field kick for wing Keith Earls. However, France stopped him from making meaningful ground.

The ball was gradually worked back infield, and the home crowd’s mood suddenly turned from celebratory to nervous. Ireland were not making mistakes. They’d carry the ball, make a metre or two, and recycle it cleanly. France, although doing their best to slow Ireland down, were struggling to stop them.

Henderson, Stander and Ireland’s forwards continued to carry with increasing ferocity, while Murray and Sexton guided them phase-by-phase and, in the 83rd minute, they got inside Sexton’s drop goal range.

Stander, making one last carry, powered through a couple of tackles to gain five more metres. Sexton, ready at last, made the call and he received the ball from Murray just inside the France half.

His connection was sweet and the ball shot off into the night’s sky, sucking the noise out of the Stade de France as it went.

The ball reached the top of its arc and began to drift slowly towards the posts, eventually clearing them by a couple of metres.

Sexton’s reaction said it all. Ireland, in command for so long but then all of a sudden on the brink of defeat, had won brilliantly. 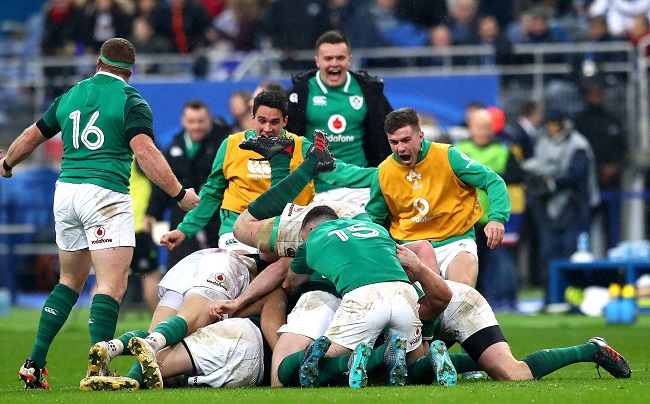 “The boys’ legs were out and I don’t think we could have got through another couple of phases,” he said.

“The management drill into us every day that it’s never over and we have got some good characters in the team. We just wanted to get off to a good start.”

There was really no stopping Ireland after that.

They scored eight tries against Italy the weekend after in a 59-19 win, while Wales and Scotland were also beaten at the Aviva Stadium.

France’s Round 4 victory against England meant Joe Schmidt’s side had won the Championship with a round to spare, and ahead of a mouth-watering match at Twickenham.

Before the Championship, it was billed as a potential decider but Ireland had far too much for England – Garry Ringrose, Stander and Jacob Stockdale all crossing in a 24-15 win that sealed a third Grand Slam.

Stockdale, who scored an incredible seven tries, was named Player of the Championship. But it was Sexton who delivered their Defining Moment.