Ireland may have enjoyed their fair share of Guinness Six Nations glory since 2009, but their Grand Slam victory 11 years ago will be forever etched in history – as much for the drama that ensued as for lifting the trophy for the first time in 24 years.

Without a Championship title since 1985 – and a Grand Slam victory since 1948 – Declan Kidney’s men headed to the Principality Stadium – then the Millennium – in the final match of the competition knowing that a win over the Welsh would see them over the line.

Although Wales went into the clash having tasted defeat in France in Round 3, the defending Grand Slam champions knew that if they could besmirch Ireland’s so-far perfect record and win by 13 points, they would clinch successive Six Nations crowns.

In the ultimate case of winner takes all, there were twists and turns throughout the 80 minutes. Wales took a slender advantage into the break and had a great chance to deny their visitors victory with a last-gasp penalty.

But in the end Ronan O’Gara’s late drop goal proved to be the difference between the teams, signalling the end to 61 years of Grand Slam pain and securing Ireland’s first Six Nations title since Italy’s introduction in 2000.

Ireland’s ‘golden generation’ had looked in imperious form throughout the opening four rounds of the Championship, presenting Wales with a somewhat herculean task of preventing them from lifting the trophy.

The likes of O’Gara, Brian O’Driscoll and Jamie Heaslip were all at their brilliant best ahead of the almighty clash in Cardiff, with 30-21 and 14-13 wins over France and England respectively demonstrating that they would be tough to stop. 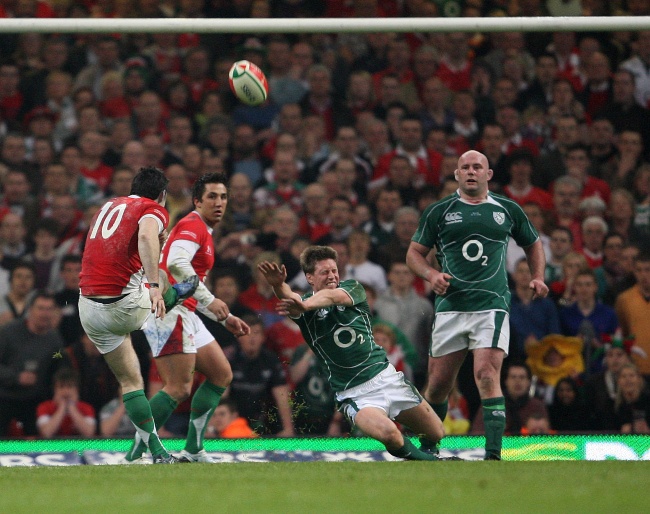 However Wales – who had enjoyed Grand Slam success in two of the previous four years – were among the toughest tasks they were likely to face in the series – particularly on home turf.

Despite being rocked by the loss of No.8 Andy Powell ahead of kick-off, Warren Gatland’s men possessed winning know-how, and their steely determination was on show from the off with Stephen Jones kicking his team into a 6-0 lead.

But Ireland – who had made three changes from the team that had defeated Scotland seven days earlier – showed the combative spirit of champions to fight back, in a match that was ultimately decided by the final kick.

Despite being behind at half-time, Ireland emerged from the interval at a ferocious pace – scoring twice in quick succession as O’Driscoll and Tommy Bowe crossed the whitewash, with the ever-reliable O’Gara converting both efforts to hand the men in green an eight-point lead.

But the game was far from over and Jones punished two mistakes with six points, before adding a pivotal drop-goal to hand Wales the advantage with under five minutes remaining.

A shot at glory…. #TBT to @RonanOGara10‘s Grand Slam winning drop goal back in 2009! pic.twitter.com/tEXvNtkzP6

Suddenly, up popped fly-half O’Gara, measuring the ball and kicking it between the posts to seemingly clinch victory and Championship glory for his team.

The celebrations were put on ice as Jones lined-up a kick a mammoth 48 yards from the posts at the death, but the sight of the ball slowly dipping and eventually coming to a halt inches short of the upright cued tumultuous scenes from everyone adorned in green.

There were wild Irish celebrations both in Cardiff and back at home, and immediately after full-time skipper O’Driscoll expressed a mixture of delight and relief as he tried to sum up his and his team’s emotions following such a dramatic victory.

He said: “It sounds wonderful to finally get over the line and be the Grand Slam champions. The amount of things going through my head during the week has been incredible – what might happen and so on – so it feels brilliant to have actually done it.

“For it to go down to that at the end – it would’ve broken my heart if the ball had gone over. I’m so proud of the boys, we’ve taken a lot of flak over the last 18 months or so and to come back and win our first Grand Slam in 61 years is amazing.

“Ronan’s a wonder. He’s got a strength of character that you don’t see very often and you just want to win with him and do well with him.” 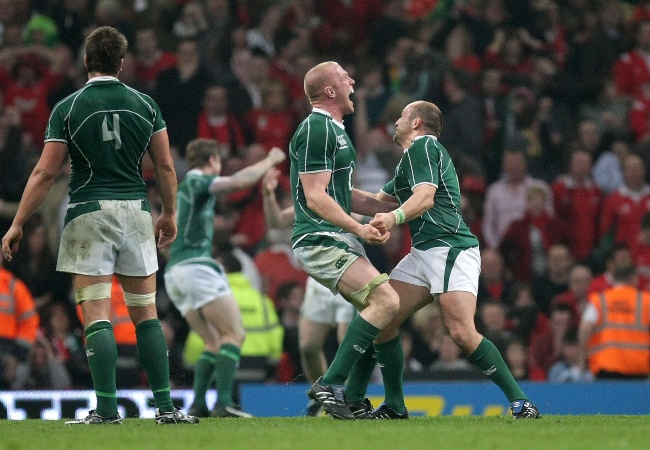 Two of the survivors from the 1961 Grand Slam winning side – Jackie Kyle and Bertie O’Hanlon – were in attendance in the Welsh capital, and the 86-year-old O’Hanlon couldn’t hide his pride.

He said: “I am glad to have been here to witness this. I brought the match ball from our final game against Wales 61 years ago with me and it is more than time that we were joined in our place in history.”

Since their 2009 triumph, Ireland have gone on to win a further three Guinness Six Nations titles, including a Grand Slam in 2018.