England had their worst period of the 2020 Guinness Six Nations in their opening match in Paris. Our data analyst Simon Gleave looks at how they recovered from that to be the best at the critical areas which won them the title.

England could not have begun the 2020 Guinness Six Nations worse than they did. After 21 minutes of the match most expected would be their toughest, England were 17-0 down in Paris against a resurgent French side.

However, England won the rest of the game 17-7 with a crucial score after the 80-minute mark setting them on their way to the title.

The penalty goal which England scored at the end of their match in Paris gave them a losing bonus point which in the final standings has proved crucial. It was England’s dominance in crucial areas which won them the title though. 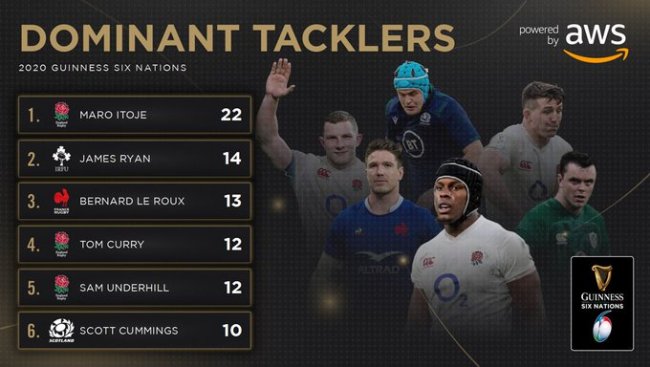 Efficient in attack AND defence

One of the features of England’s opening match against France was the sheer number of opportunities England created.

AWS data registered 12 visits to the France 22 which would normally be enough for a comfortable win. However, French defence was dominant that day and restricted England to just 1.4 points per 22 entry.

At the other end, France scored 24 points from their five sorties into the England red zone, the first three producing a remarkable 17 points on the scoreboard. England would never concede as much or as score as little from opportunities as they did in this match.

Two points on average were scored each time England crossed the 22 in foul weather in Scotland, 2.67 against Ireland, 4.8 against Wales and 3.4 in Italy.

At the same time, English defence was miserly when the opposition got into England’s deepest territory. Scotland, Ireland and Italy all scored fewer than two points per visit to the England 22. Wales did better but they had been restricted to just two points per visit in a first half which England had won 20-6, a margin which was big enough to effectively win the match.

Quick off the mark

England didn’t score a single point until the 57th minute against France, by which time they were 24-0 down. In their other four matches, England were quick off the mark – opening the scoring within the first 11 minutes in all four.

Early tries have been a feature of England under Eddie Jones, notably in the World Cup semi-final against New Zealand and throughout the 2019 Guinness Six Nations.

In each of their final three matches this season, England opened the scoring with a try in the first eight minutes. In the potentially tricky matches against Ireland and Wales, the games were arguably won by the half-time mark with England leading 17-0 and 20-6 respectively at the break.

France, who only failed to win this year’s Championship on points difference, have developed the same ability to score early.

The French scored a try in the first seven minutes of four of their five matches, only failing to do so in the defeat at BT Murrayfield.

The three teams who were in with a shout of the Championship on the final day were the top three at scoring early on in matches.

Kings of the set-piece

I discussed England’s position as the 2020 Guinness Six Nations’ best lineout team in this article.

The England team ended the competition with effective ball won from 84% of their own lineouts while their opponents’ throws delivered effective possession only 69% of the time according to the stats, powered by AWS.

This confirmed England in top position on this set-piece ahead of Ireland and France in second and third place.

The scrum was another area of dominance for England. From 53 scrums of their own in the 2020 Championship, England conceded only one free-kick and no penalties.

France were similarly dominant conceding nothing at all on their put-in but they had less than half of the scrums England did.

England really excelled on opposition ball at the scrum too, winning four penalties and a free-kick. No other team won as many penalties, or as many sanctions, when their opponents had the put-in.

Opposition scrums were where France’s discipline fell down, conceding an incredible 11 penalties and four free-kicks, twice as many sanctions as any other team. This indiscipline at the set-piece can be costly as France discovered in the one match they lost, to Scotland at BT Murrayfield.

England’s forwards allowed only two penalties on opposition ball during the whole competition. France’s Mohamed Haouas (4) and Julien Marchand (3) were both penalised more than the entire England pack.

Another strength of England’s during this Guinness Six Nations title win was their dominant tackling, killing the momentum of opposition attacks and possibly setting up the chance for a turnover.

During the competition, AWS data reveals that England made a dominant tackle every 51 seconds that their opposition were on the ball.

The closest to England in this facet of the game were France who made a dominant tackle every 64 seconds of opposition possession. Scotland were next best, followed by Ireland with Wales and Italy bringing up the rear on a metric whose order very nearly mirrors the final Guinness Six Nations table exactly.

England’s success was built on fast starts, the best set-piece and a defence which killed opposition opportunities like no-one else could.

England were not the 2020 Guinness Six Nations top scorers and nor did they concede the fewest points. They did, however combine attack and defence better than anyone else.

France just missed out, finishing in their highest position since 2011 with a young team which is still learning. Five of the six teams have now ended at least one of the last three Championships in the top three. It is now more competitive than ever.

Simon Gleave is Head of Sports Analysis at Gracenote and has been a sports data analyst for over 20 years – you can follow him here on Twitter.