Antoine Dupont and Romain Ntamack ensure France play with such elegance and grace, like a swan gliding on water.

Their speed, vision and creativity – all done with such effortless style – has made Les Bleus a joy to watch in the 2020 Championship.

But beneath the surface is Gregory Alldritt, the heart of France’s engine who hits hard, runs harder and revels in the dirty work at the breakdown.

Alongside Dupont and Ntamack, Alldritt completes France’s trio of players nominated for the 2020 Guinness Six Nations Player of the Championship.

The No.8 is part of a back row that could lay claim to being the best in the northern hemisphere, alongside Francois Cros and captain Charles Ollivon – three players who have played a major role in France’s transformation into title contenders.

The No.8 position is stacked with world-class options across the Championship, from Ireland’s CJ Stander and Wales’ Taulupe Faletau to England’s Billy Vunipola and Italy’s Jake Polledri.

But Alldritt’s place is now firmly along them. Against Ireland on Super Saturday, he was named Player of the Match for an immense performance that helped France secure a fourth win from five. 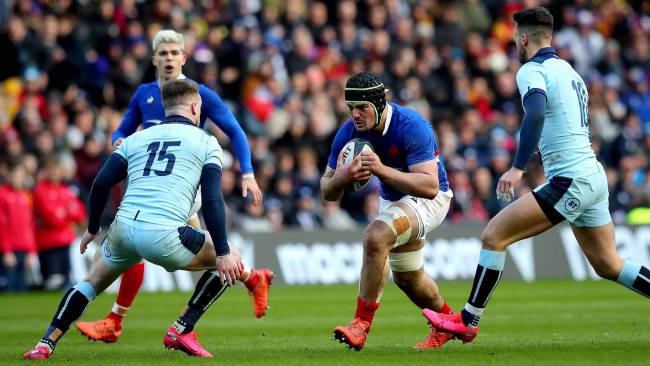 He made 23 tackles and missed none in Paris, helping him finish the campaign with 81 in total – behind only his teammate Bernard le Roux in the overall list, according to the stats, Powered By AWS.

Eight of the tackles were defined as dominant, while he made a joint-second best four breakdown steals and arrived at 83 defensive breakdowns – 22 more than any other player.

Of course, all No.8s need to pack a punch in attack too and Alldritt is so much more than a defensive warrior.

With 393, he made the third most metres behind Ireland’s Jacob Stockdale and Scotland’s Stuart Hogg, with the next forward – Italy’s Polledri – all the way down in eighth.

With 66, he made the second most carries of any other and three linebreaks – proving there’s speed as well as power – while he also crossed for a try against Italy in Round 2.

At just 23 and with 15 Test matches to his name, Alldritt is a relatively new name on the block. But its name that fans will soon become use to.

In Imanol Harinordoquy, Sebastien Chabal and Louis Picamoles, France have been blessed with some of the Championship’s great No.8s. In Gregory Alldritt, they now have another.

Share this article:
Previous Story Scarratt pleased with professional England performance in Parma
Next Story Smith picks out the positives from England defeat