Co-host of performance analysis podcast Running the Numbers, Sam Larner, has dived into the Matchstats powered by AWS, to give his analysis of Round 3 of the 2021 Guinness Six Nations.

The Problem with Penalties

There have been five matches so far where the difference in penalties conceded between the two teams have been equal to or greater than three. Of those matches, four have been won by the team conceding fewer penalties. The only exception is France, who conceded nine penalties to Ireland’s five and still won the match. The link between conceding penalties and losing matches is direct. Concede a penalty and the opposition will usually have the option of gaining easy territory through a kick to the sidelines or kicking at goal; so far penalties are being successfully converted 83.8% of the time. 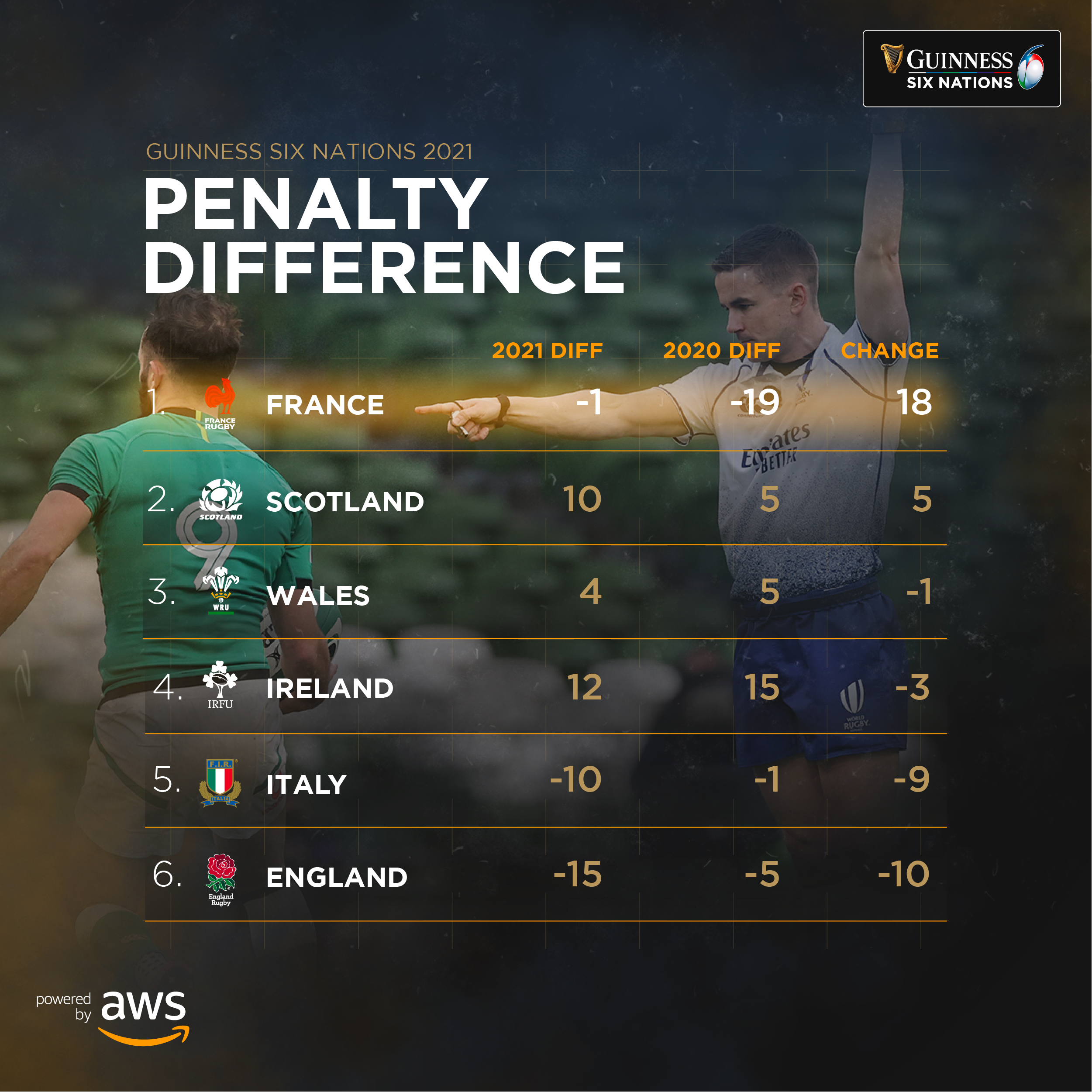 The two standout teams in the table above are England and France. England conceded five penalties more than they were awarded last year so ill-discipline was an issue but it has become much worse in 2021. They are the joint most penalised team on a per-game basis and only France are awarded fewer penalties. France have been the antithesis of England, they have sorted the problems that led to them being the most penalised team last year. In 2020 France conceded the most penalties in the scrum and were caught offside more than anyone else. This year they have yet to be caught offside and concede the third fewest scrum penalties.

We spoke earlier about the two options the attacking team have when awarded a penalty, but of course they have a third, they could tap and go. In 2020 just one of the 74 tries came from a tap and go, so far this year four of the 43 have come via that means.

Usually, if a team kicks more they will carry less and vice versa. Last year, Ireland kicked less than anyone and carried more than everyone bar Wales. This year Ireland have kicked almost ten times more per game, the third most of everyone, but still carry more than anyone else. This is only possible because Ireland have almost three minutes more possession this year than last. It hasn’t been an ideal start to the Championship for Ireland but these stats, provided by AWS, provide a rosier picture. Ireland are carrying but are also happy to kick possession away instead of having it taken from them in a ruck; no team loses fewer rucks than Ireland.

Kicks have a bad reputation but they are a vital part of the sport. They can be used to create attacking opportunities, as Ali Price and Antoine Dupont have shown, and they allow an escape from a situation which might otherwise result in a much worse result, a turnover. There have been 460 kicks in 2021 but only five tries have come from kick returns whereas nine have come from just 65 turnovers. It is always better to hand over the ball willingly via a kick than to have it stolen at a breakdown. 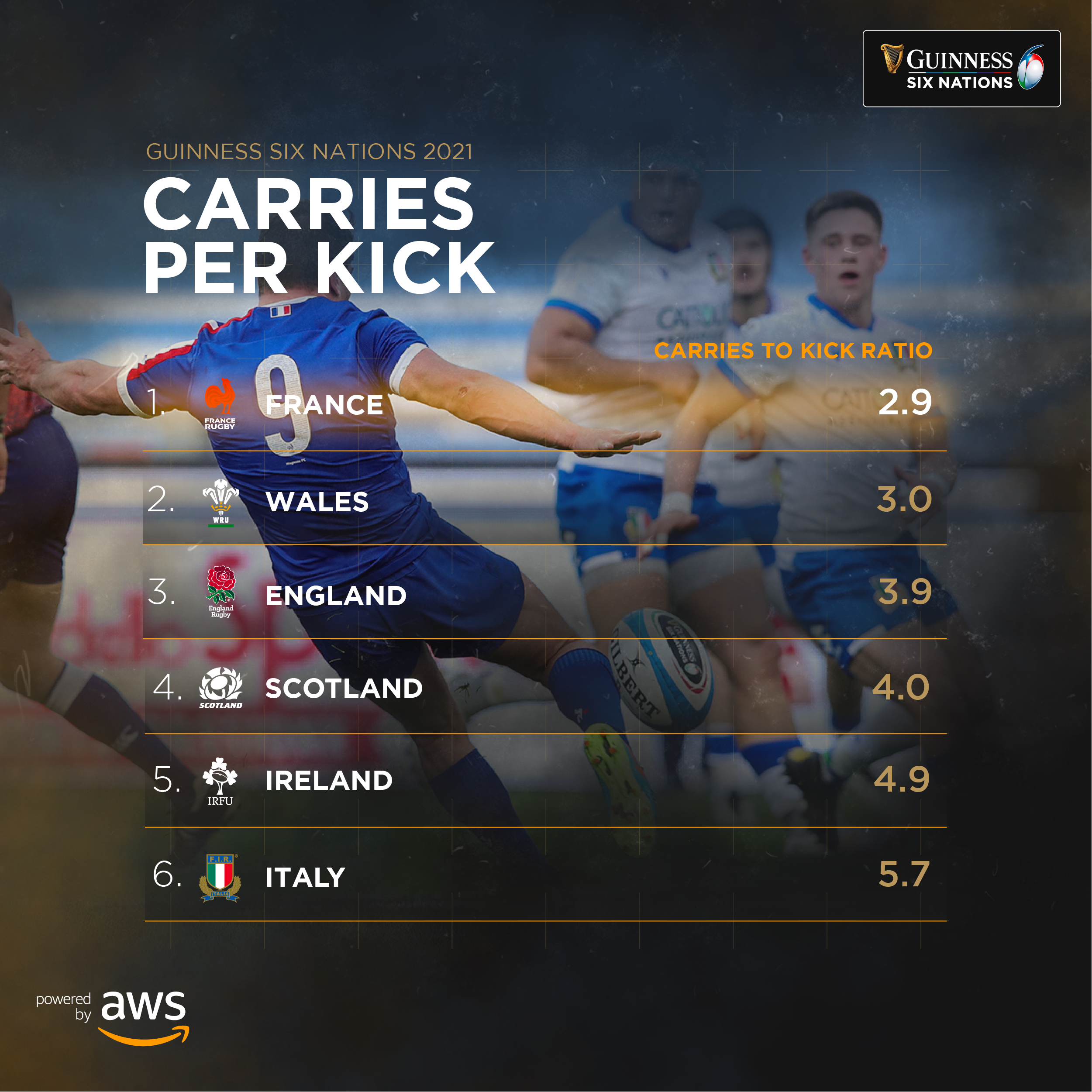 France and Wales know that better than anyone. We love it when the backs are let loose in space but the real secret to the only two teams with 100% records is that they know when to go for it and when to play safe. At the other extreme, both in carries per kick and table position, are Italy. Italy’s commitment to keeping possession is commendable but it often takes them into dead ends as shown by the fact that only England lose more rucks per match than Italy.

A good backrow player will make plenty of tackles, carry a lot, or carry a long way, a great player will do all three. In 2021 Taulupe Faletau is the only player to feature in the top ten in successful tackles, ball carries, and metres carried. He sits second, second, and tenth respectively. In 2020 this feat was only achieved by two players; Gregory Alldritt and Jake Polledri who were both in the running for player of the tournament.

Alldritt, Polledri, and Faletau might be the best combined backrow but the one Wales are putting out would run them close. Through the three rounds Justin Tipuric and Taulupe Faletau have been the constants, playing all 240 minutes. The blindside flanker role has been an injury enforced job share between Dan Lydiate, Aaron Wainwright, Josh Navidi and James Botham. 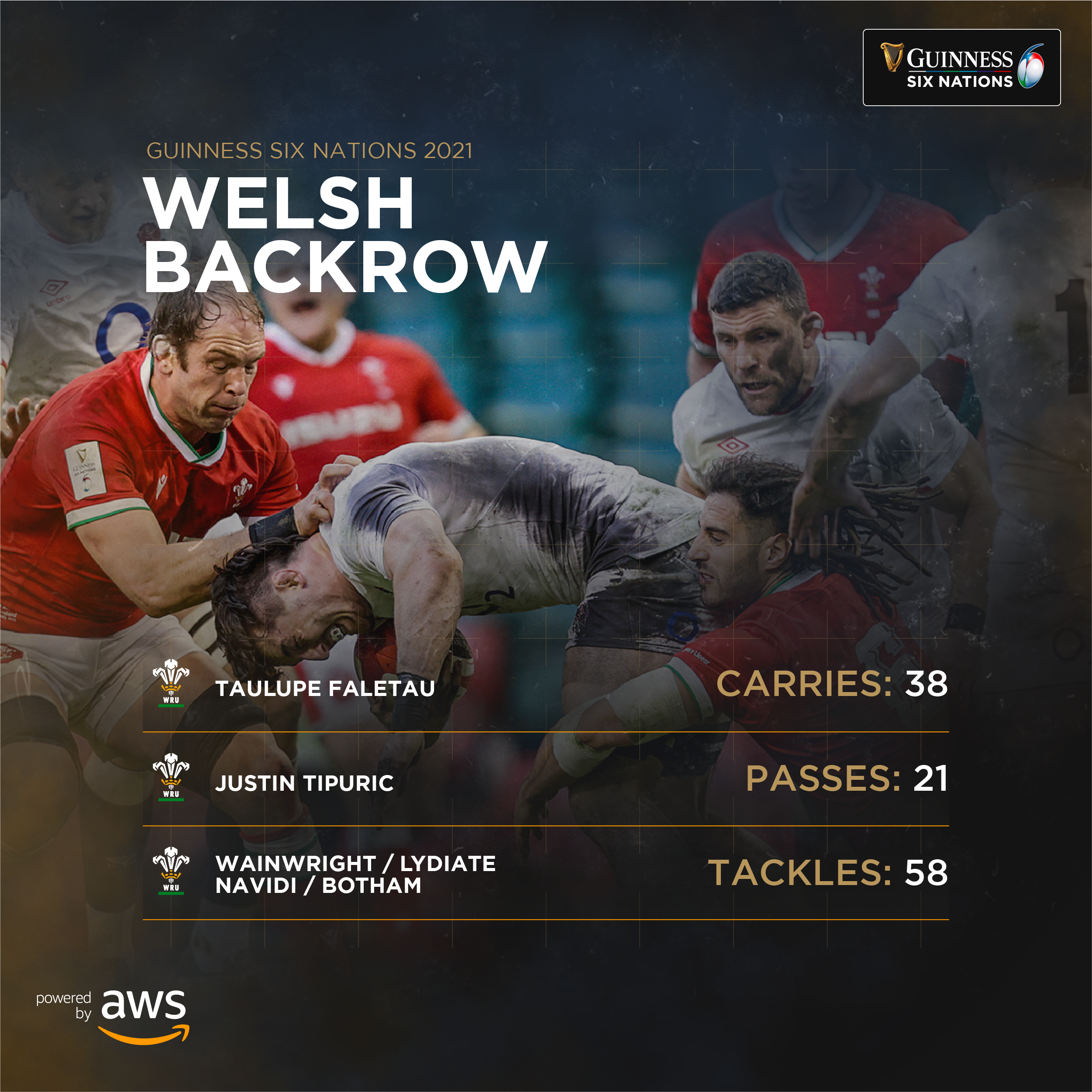 The balance of a backrow is crucial. You can’t just have three ball carriers because then you won’t have anyone to clear the rucks to get quick ball. You also can’t have three stout defenders because then you lose attacking ability. The Welsh balance is clear; Faletau takes on the vast amount of carries, everyone makes tackles but the combined blindside flankers make the most, and Tipuric is the link between the forwards and the backs with his distribution. It really is the dream backrow and a big reason why Wales find themselves with three wins so far.

Each week we will call out one player whose value might not have been clear when looking at the traditional stats. This week the AWS advanced stats led us to pick Tadhg Beirne of Ireland. Beirne has played all but eight minutes of this Six Nations and he ranks first in both attacking ruck arrivals (87) and defensive ruck arrivals (30).

Share this article:
Previous Story Injury blow for Wales as Kieran Hardy ruled out
Next Story Tuilagi turns to salsa to aid recovery