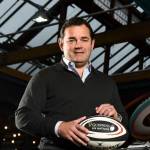 by Will Carling - AWS Rugby Ambassador

We were treated to the game of the Guinness Six Nations so far in a Round 4 which featured French flair, exceptional English kicking, and game-changing Dominant Tackles.

When I am using the Matchstats powered by AWS to analyse a game I always look at Dominant Tackles first. A Dominant Tackle is crucial because it stops momentum, and can turn defence into attack and lead to turnovers.

This weekend, Dominant Tackles were a storyline in two of the three matches. The Matchstats also show that the French attack remains an extremely potent weapon, and how valuable Owen Farrell is for England.

Back in the opening round of the 2020 Guinness Six Nations, France beat England 24-17 to announce the start of a new era of French rugby. The French made over 200 tackles that day. 21 were Dominant Tackles.

Those Dominant Tackles drove England back and stifled their attacking opportunities. One year later and France made just 35 fewer hits but this time they managed just three Dominant Tackles.

This had a clear impact on England’s attack. England got over the gain line on 67% of their carries last weekend but just 40% a year ago. Perhaps more crucially, England made 875m with ball in hand compared to just 586m in the same fixture a year ago.

They actually had the exact same number of carries – 128 – in both games.

That Matchstat shows why England appeared to be a completely different team to the one who strode out in Paris a year ago.

Looking at the wider Championship picture, all is not lost for France. Their attack continues to excite and they still have a great chance of winning the title.

The Damian Penaud try was the try of the Championship so far and one of the finest tries of the last few years. Across the Championship, France have had six players make three or more offloads, more than any other team and they have played one match fewer. As a team they have broken 82 tackles, again more than anyone else and again with one match in hand.

France also were more clinical than England in the 22 on Saturday, scoring almost a point per visit more than their opposition.

That clinical attack could also be seen in the tries per linebreak Matchstat. France were able to convert two of their five linebreaks into tries, whereas England were successful with just one of their seven.

That is both a positive and a negative for France. Essentially, they were more clinical but had fewer opportunities.

Nowhere is that clearer than their post-contact metres, which were 30m fewer than England. On a per carry basis France were ahead, it’s just that they had 34 fewer carries in total. 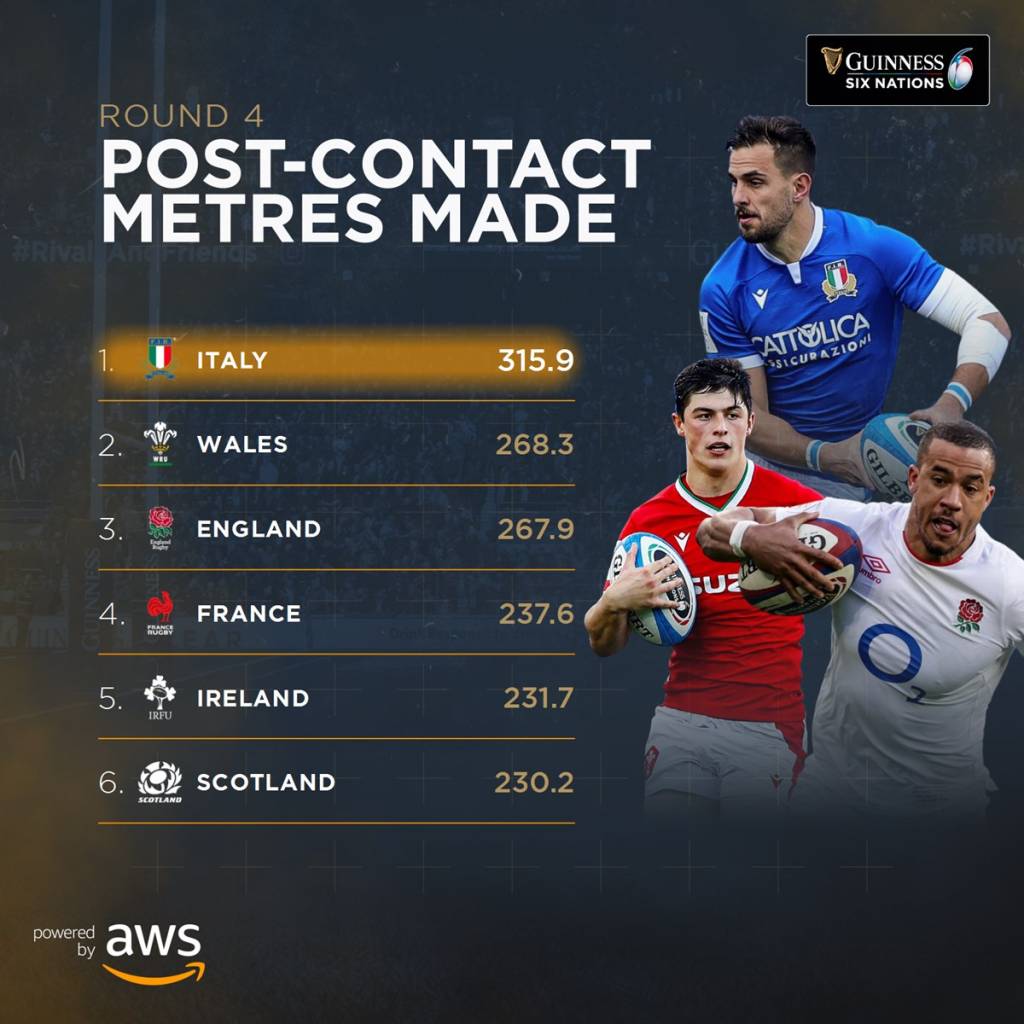 On many of the traditional stats, Scotland’s defence stifled Ireland. They missed just six of their 135 tackles. Ireland in contrast missed 22 to 149 successful.

Scotland also made 18 Dominant Tackles to just five by Ireland.

But Scotland were beaten in the Power Game, specifically at the breakdown, winning just eight turnovers to Ireland’s 14. Scotland had just 35 rucks in the Irish half, and they were turned over ten times in that part of the pitch.

In addition to those 14 turnovers in open play, they also lost six of their own lineouts. 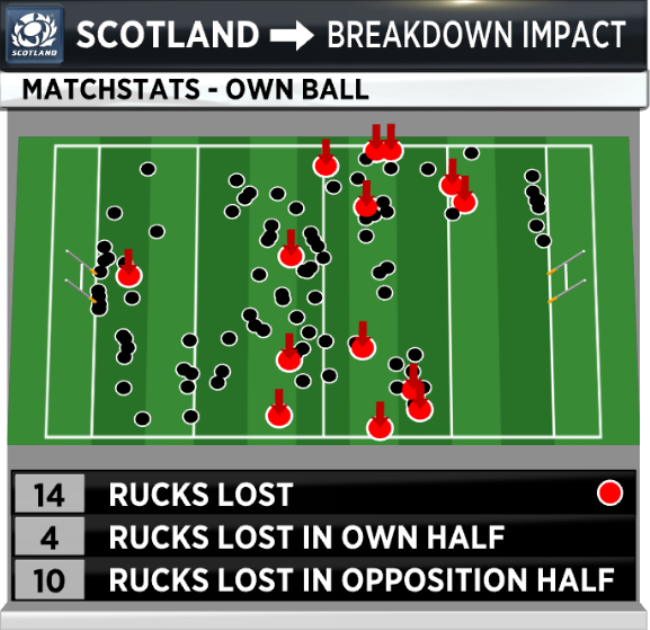 The overall picture is that while Scotland were good defensively they failed to build any kind of attacking platform.

If rugby is a pyramid then the ability to hold onto your own ball, both at the breakdown and in set pieces, is the base. On Sunday, Scotland did well in some areas but they were undone by that shaky foundation.

The Power Game, Breakdown Impact and Points Per Visit To The 22 capture the quality of the team performance. For 28 of the 30 players on the field at any given time, it is about each player performing their individual skills in a complex environment that shifts quickly from structured set-pieces into open play.

But goalkickers are a breed apart, they have to do all that and land the kicks at goal too.

Captains too have huge additional responsibility to lead the team, interact with the referee and make key decisions throughout the game.

Like Farrell, I also captained England, though I never had to worry about goalkicking. But I did have to balance the twin pressures of captaincy and personal performance. The key for me was to focus on playing first. If I was playing well, I had authority. But if my personal standard dropped, I felt that authority fading.

Farrell played superbly at inside centre with 11 tackles and more offloads than any other English player, and also landed all five of his kicks, keeping his team in contention before that final Maro Itoje try.

Kick Predictor, which uses Machine Learning to estimate the probability of a successful kick, gives us a real insight here. Using both historical and real time data, the probability of success with each of his individual kicks was 57.6%. 95.1%. 79.6%. 57.6% and 57.6%.

Taken as a set, the probability of success was just 14.8%.

Farrell passed the examination with flying colours. What a fantastic performance under pressure. 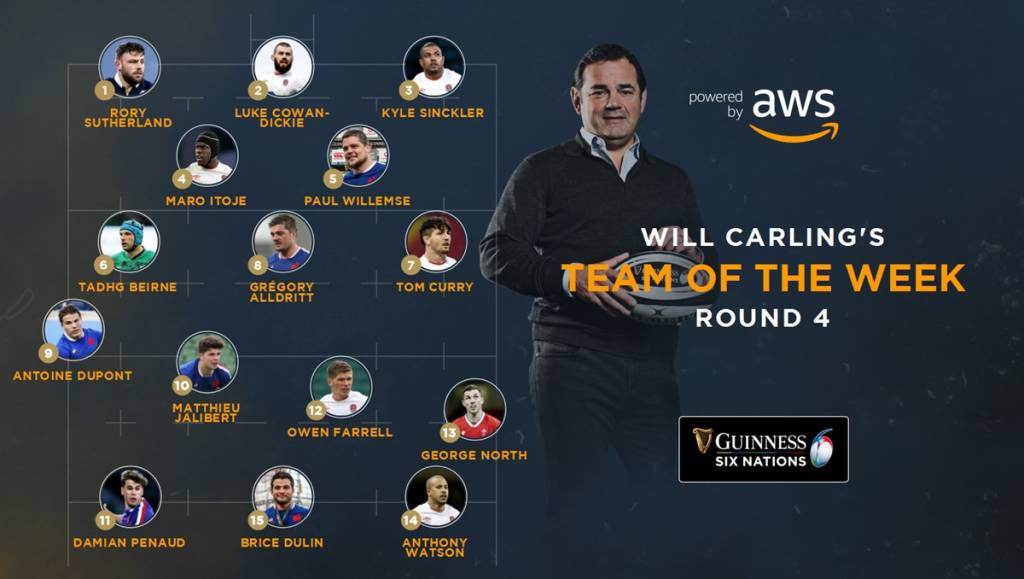 Will Carling’s Team of the Week

AWS Rugby Ambassador Will Carling is a former England Team captain. Every week, he will share his insights and explore the impact of Matchstats powered by AWS on each round of the Guinness Six Nations, along with selecting his Team of the Week.

Share this article:
Previous Story Matthieu Jalibert named Guinness Six Nations Player of Round 4
Next Story The Fantasy Rugby Transfers you need to make ahead of Round 5