England star Poppy Cleall has been named 2021 Women’s Six Nations Player of the Championship, proudly supported by GUINNESS, after winning the first ever public vote for the award.

Cleall was nominated for the award alongside fellow England forward Zoe Aldcroft and Caroline Boujard of France by a panel featuring the head coaches, captains and an equal representation of members of the media from all six competing nations.

She becomes the second ever winner of the award, following in the footsteps of Emily Scarratt. Cleall was the overwhelming choice of fans, winning 62% of over 12,000 votes cast.

The 28-year-old was a force to be reckoned with at the back of the England scrum, winning Player of the Match against Scotland after a powerhouse performance alongside sister Bryony and following that up with the match-winning try in the final against France.

Commenting on her award, Cleall said: “It’s a huge honour to be named Player of the Championship. I am not only a rugby player but a massive rugby fan and have been in awe of some of the games and moments in this tournament.

“It’s been such fun and a great occasion in women’s rugby to be a part of.

“It’s already a huge moment in my career to win back-to-back titles with this team but to win this award is thanks to all the hard work of those around me from my coaches, team mates and my family.

“Representing the Red Roses is a massive honour and one I hope I do proud. This tournament has been one-of-a-kind and I hope other female rugby players and athletes are given the same opportunity to be the best they can be.”

Ben Morel, Six Nations CEO, said: “Massive congratulations to Poppy on an outstanding Championship. She is an incredible athlete who performed consistently throughout and also turned the biggest match of the year in her team’s favour, It’s great that so many fans have voted to recognise her outstanding contribution to England’s success.

“It was also fantastic to witness a rise in TV audiences and stronger than ever engagement on our digital platforms. I would like to thank everyone who watched matches, played fantasy rugby and took the time to vote. You are helping us grow women’s rugby and give these brilliant players the platform they deserve.” 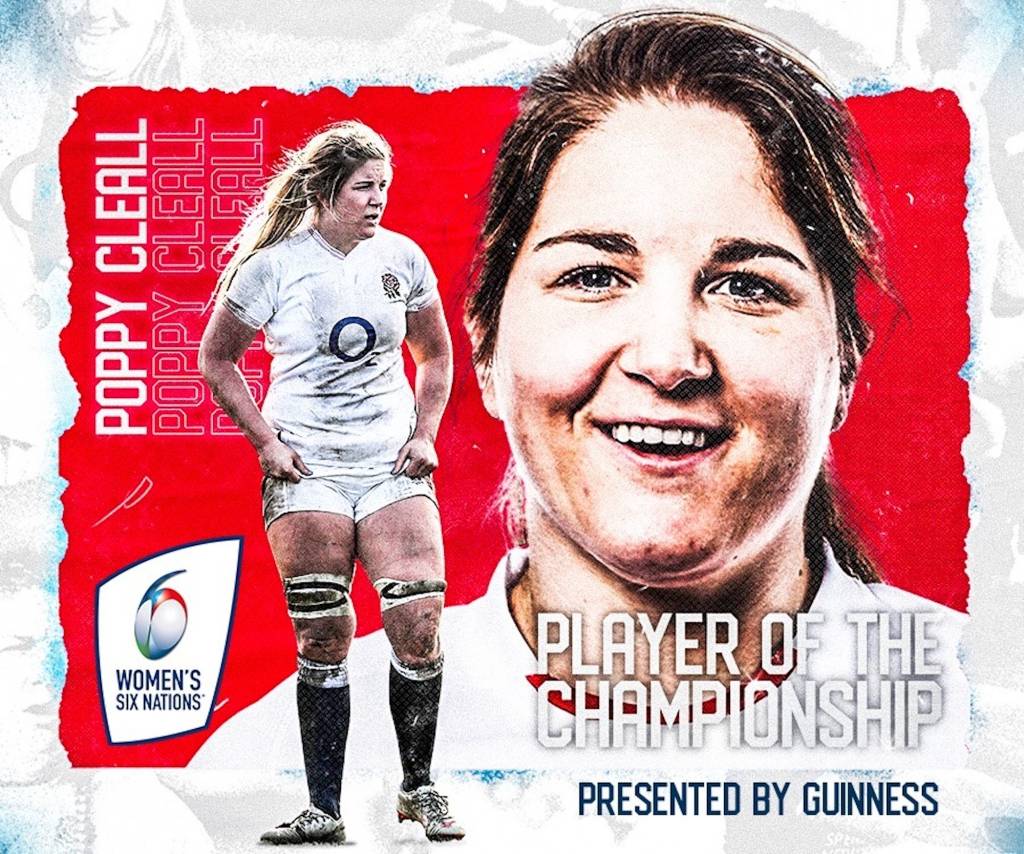 Alan McAleenan, GUINNESS Marketing Director, Ireland (IOI) commented: “We are delighted to recognise England International Poppy Cleall as the 2021 Women’s Six Nations Player of the Championship, as voted for by the public for the very first time in the Championship’s history.

“As Partner and Sponsor, GUINNESS is delighted that the individual and collective talent in the Women’s Six Nations teams is recognised in the Player of the Championship award. On behalf of the GUINNESS team, we would like to congratulate Poppy Cleall and all of the fantastic nominees, and we very much thank our fans and the public for getting involved and casting their vote in what’s been an incredible Women’s Six Nations 2021.”

Share this article:
Previous Story 2022 Guinness Six Nations fixtures announced
Next Story “I don’t know what to do” – Cleall surprised with Player of the Championship trophy