Defending champions Wales will feature in the opening match of the 2022 Guinness Six Nations, with kick-off times revealed for next year’s Championship.

Wayne Pivac’s team face a tricky trip to Dublin in Round 1 to play an Ireland side they narrowly beat on the opening weekend of their successful 2021 Championship campaign. 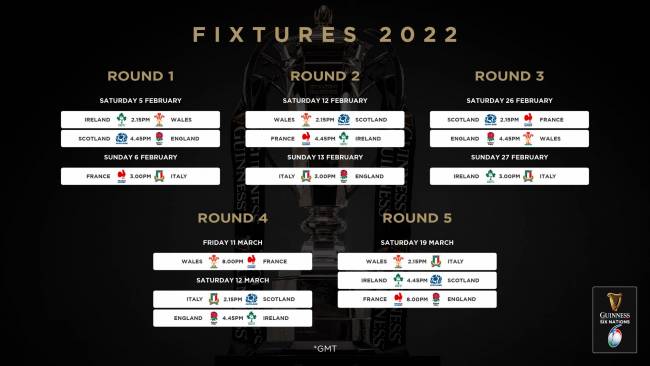 The game will start at 2.15pm on Saturday 5 February and is swiftly followed by the eagerly-awaited Calcutta Cup encounter between Scotland and England.

Scotland regained the famous trophy in the 2021 Championship by winning at Twickenham for the first time since 1983.

They will hope to retain it in Round 1 of the 2022 Championship, and the match begins at 4.45pm at BT Murrayfield.

On Sunday February 6, Round 1 finishes at the Stade de France, where France and Italy meet at 4pm local time (3pm GMT).

Later in the Championship, there is much excitement ahead of the return of Friday night rugby and organisers have confirmed it will be an 8pm kick-off on March 11 as Wales host France in Round 4.

Super Saturday is also a date to mark on the calendar, with three matches back-to-back on March 19.

The day starts in Cardiff, where Wales host Italy at 2.15pm, and then heads to Dublin where Ireland finish off their campaign with a home clash with Scotland at 4.45pm.

And then rounding it all off, France and England meet in Le Crunch at 9pm local time (8pm GMT) at the Stade de France.