Having scored against Japan in Edinburgh a week ago, Adams spectacularly added to his tally, which now stands at five tries in two games, during a convincing win for Warren Gatland’s side.

It follows the three tries in three games he notched during the 2021 Guinness Six Nations, as the 26-year-old once again showed himself to be one of the premier finishers in world rugby.

The Lions opened the scoring after three minutes through another Welshman, Louis Rees-Zammit, who showed great pace on his debut to get onto the end of Chris Harris’ chip and dot down.

Hamish Watson, another Lions debutant, then scored the tourist’s second from close range after being popped the ball from the back of the ruck by Taulupe Faletau.

The Lions were 14-0 up inside seven minutes against their South Africa opponents but Sigma Lions recovered well to keep the Lions out for an extended period.

However, their third try eventually came after a looping lineout from Jamie George found Owen Farrell in midfield who popped the ball to Ali Price to score an amazing set-piece try.

Sigma Lions did get one back with five minutes remaining in the first half, after a lightning-fast counter-attack left them with a three-on-one overlap which Vincent Tshituka duly finished off.

Adams scored within a minute of the second half starting after he hit a smart line off Watson’s inside shoulder before stepping the last defender to cross the whitewash.

Sigma Lions kept things competitive as Rabz Maxwane provided a support line to score their second try of the evening but a moment of magic from Finn Russell soon got the visitors back on track.

The Scotland fly-half flexed his impeccable short-kicking game by dinking the ball over the defence to find Adams leaping high out wide for his second. 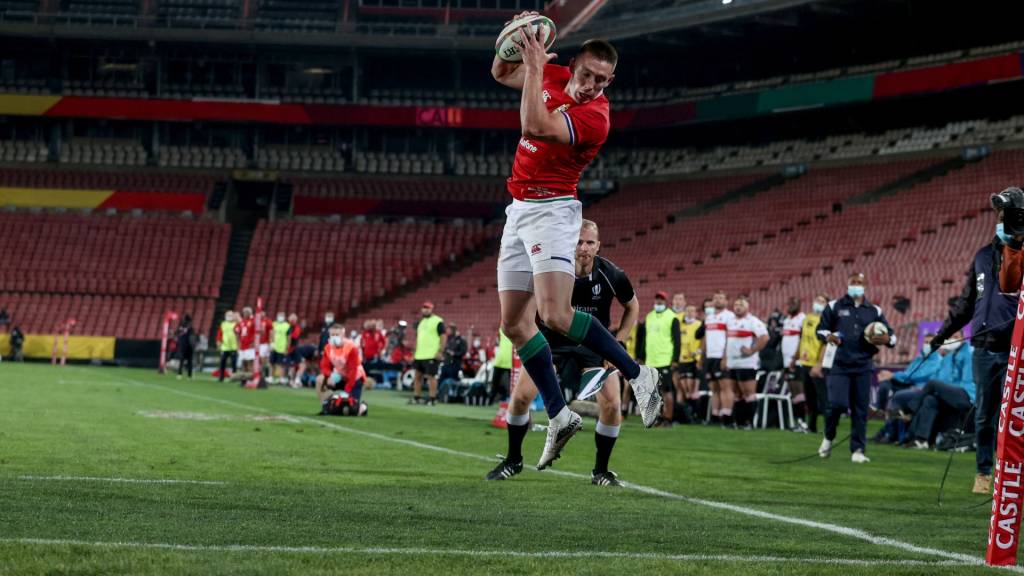 The Lions scored again through replacement Gareth Davies after Elliot Daly stepped two players, broke a tackle and offloaded before Adams secured his hat-trick after Jonny Hill fed to the winger to give him a clear path to the try line.

Adams’ fourth came after a lineout drive sucked in the home defence and the ball then went wide to the Welsh wizard, who was left unmarked.

Farrell then kicked his eighth conversion from eight attempts to ensure the final score read 56-14 and get the tour off to the perfect start.

Hamish Watson said: “It’s just great to finally be here, I think the Tour was up in the air for a few months so it’s just great for the boys to get their first caps.

“There’s a lot to work on, it was a bit scrappy at times and they were a big physical team, I thought there were parts of our game that we were happy with but there was lots to work on as well.

“Everyone’s entitled to their opinion, it is what it is but I just really enjoyed it, it’s great to play with players I’ve never played with before.

“I don’t think we were ever going to have a perfect first game because of the different combinations but like I say, it was a good result.

“It was a lot of the boys’ first run out for the Lions, lots of boys playing with people they’ve never played with, so it was never going to be perfect.

“It was tough at times playing at altitude, I think the lungs were going, mine certainly were going but it puts a game in the legs and I think we’ve got four more warm-ups now until the Test matches.”