France winger Enzo Reybier has been handed a five-week suspension after being sent off in his side’s 45-21 victory over Scotland in the 2021 Six Nations Under-20s.

The 19-year-old received the red card in the 24th minute of the Round 4 match following a tackle he made on Scotland No.13 Thomas Glendinning at Cardiff Arms Park.

The red card had been issued for an infringement of Law 9.18:

A player must not lift an opponent off the ground and drop or drive that player so that their head and/or upper body make contact with the ground.

Reybier appeared before an independent Disciplinary Committee via a Zoom call on Saturday.

Reybier accepted that he had committed an act of foul play that warranted a red card, and he and his representatives addressed the Disciplinary Committee on the appropriate sanction that should apply in this instance.

The Disciplinary Committee considered the submissions received and all of the evidence, and concluded that, given (among other things) the risk of significant injury to his opponent, the act of foul play warranted a mid-range entry point (ten weeks’ suspension).

This was reduced by the maximum five weeks to take account of mitigating factors (including Mr Reybier’s previously clean record, his youth and inexperience, his conduct at the hearing and his apology to his opponent).

Reybier is therefore suspended for five weeks and, given his playing schedule, he will miss (among other matches) the Ireland v France Six Nations Under-20s match on Tuesday.

Reybier has a right of appeal. 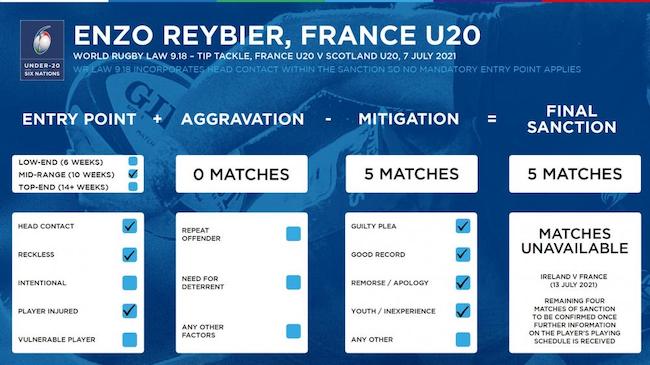