Australia managed to overcome mountainous odds to secure a dramatic 33-30 win over France in front of a packed out Suncorp Stadium.

In what was the Test series decider, Australia got the evening off to the worst possible start when winger Marika Koroibete was sent off for a controversial high shot on French skipper Anthony Jelonch after just five minutes.

With a man advantage and Australia reeling from the loss of Koroibete, France managed to notch two quick-fire scores, a penalty from full-back Melvyn Jaminet and a close range try from scrum-half Baptiste Couilloud, to take a 10-0 lead.

Australia managed to regroup when captain Michael Hooper took a superb line off a Noah Lolesio ball, feeding scrum-half Tate McDermott who touched down for their first try of the contest.

And while a second Jaminet penalty put France 13-7 in front, Lolesio then managed to intercept opposite man Antoine Hastoy to go over for the simplest of scores, handing Dave Rennie’s men a shock 14-13 lead.

A Lolesio penalty then gave Australia a four-point advantage. 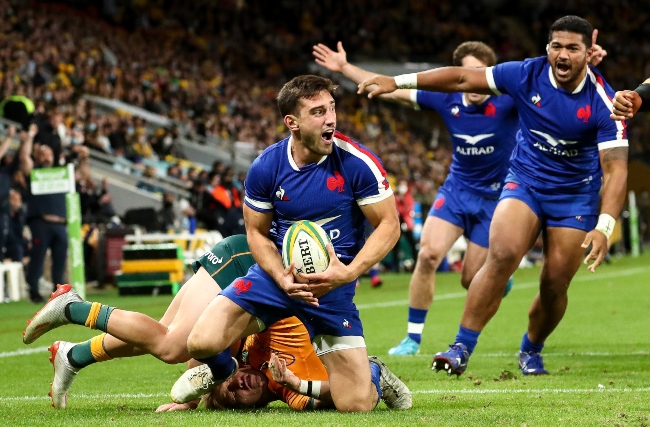 But their lead was short lived when French flanker Cameron Woki went airborne over the top of a pile of bodies to score France’s second try – 20-17 to the visitors.

France then scored what looked to be one of the tries of the series after Jaminet and Teddy Thomas combined superbly for the latter to go over.

But the score was brought back after centre Arthur Vincent knocked the ball on in the build-up, handing Australia a reprieve.

With minutes left in the first half, Australia went big and found themselves metres away from the French line after some good work from Hooper and McDermott.

But they were unable to turn their opportunity into a try, with Lolesio eventually tying the scores up at 20-20 at the break.

After the interval, France, after having Thomas’ try chalked off, then touched down for a stellar score.

Starting off the move, Thomas collected his own chip and fed Couilloud who combined with Hastoy to put centre Pierre-Louis Barassi over for a coast-to-coast score. 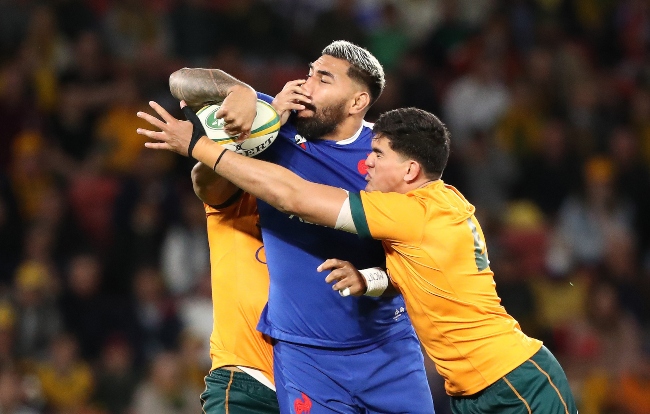 But Australia just would not give in with the hosts levelling the scores shortly after through prop Taniela Tupou, who crashed over from close range.

Lolesio then tied the game up at 27-27 with the conversion.

Both Jaminet and Lolesio then suffered a wobble with the boot after both kickers missed penalties that would have handed their side the lead.

Then after waves of pressure, Australia thought they had retaken the lead through hooker Brandon Paenga-Amosa.

However, like France’s earlier disallowed try, the score was taken off the board after Hunter Paisami was judged to have knocked the ball on two phases prior.

With under ten minutes left, Lolesio then put Australia back in front with a nerveless penalty.

And minutes later, Jaminet replied with a pressure penalty of his own to level the scores once again – 30-30.

With 77 minutes on the clock, Lolesio looked to have secured Australia an improbable win with an impressive penalty to make it 33-30.

However, in a game that was end to end right from the off, France managed to win a penalty right at the death to give them one last shot at victory – turning down a shot at the posts and kicking to touch.

But after fighting so hard with only 14, Australia would not be denied victory, winning a penalty from the French maul to secure the Test series win.

Share this article:
Previous Story Preview: France aim to make history in third Test against Australia
Next Story Wales fall to defeat against Argentina in final match of campaign