South Africa took the British and Irish Lions series into a decider after Handre Pollard inspired the Springboks to a 27-9 win in the second Test.

Pollard kicked 17 points and provided a try for Makazole Mapimpi, with Lukhanyo Am also scoring after the break to put the much-improved 2019 Rugby World Cup winners out of reach in what was far from a glorious spectacle.

WIN A 2021 LIONS JERSEY SIGNED BY THE WHOLE SQUAD

After winning 22-17 a week ago, Warren Gatland’s Lions will now have to win next Saturday if they are to secure a first series triumph in South Africa since 1997.

In almost the exact reverse of what happened in the first game, the Lions went in 9-6 up at half-time as Dan Biggar struck three penalties to Pollard’s two before the Springboks surged into life to score 21 unanswered points in the second half to make sure the tourists’ champagne remains on ice, at least for now. 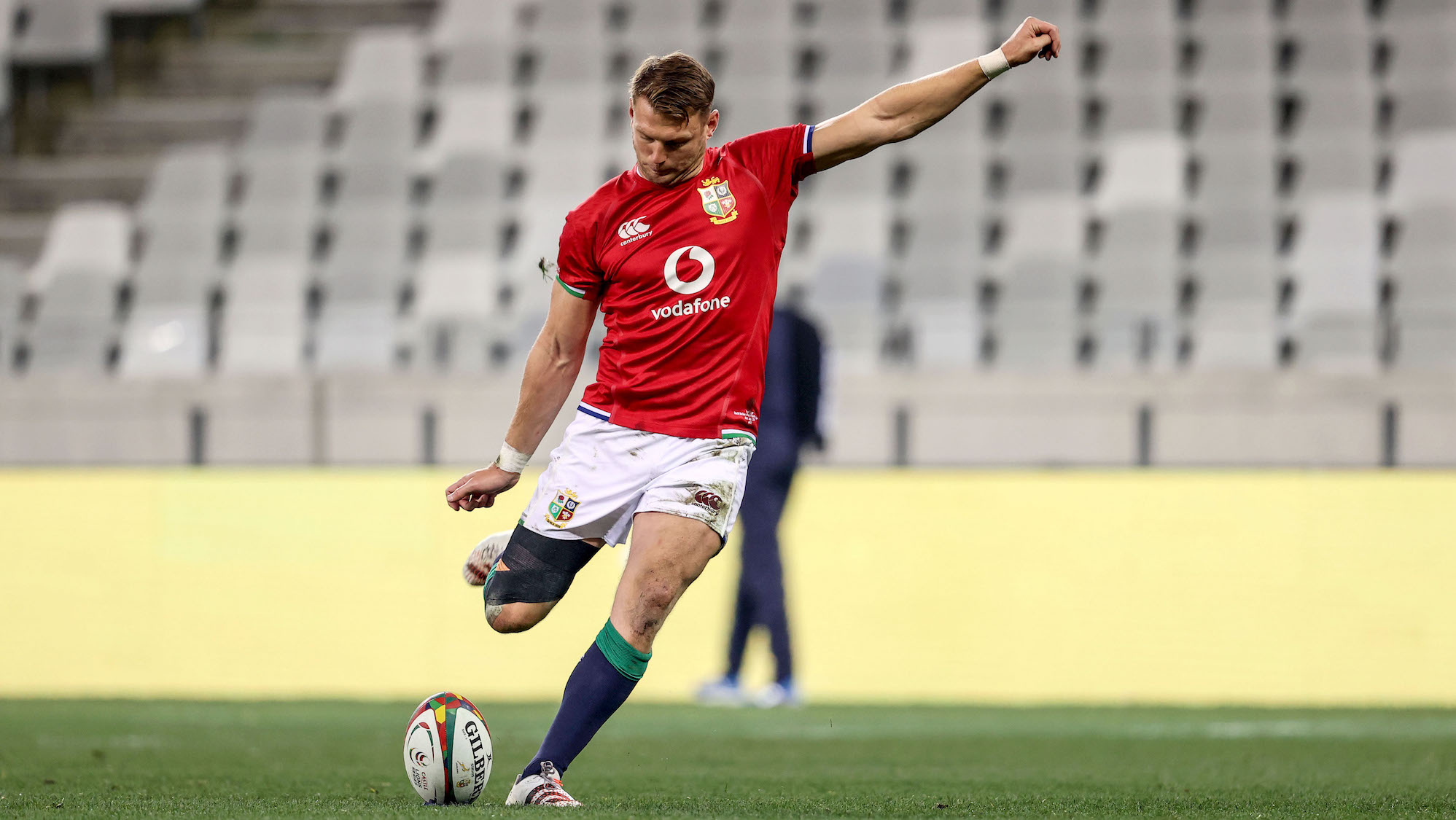 After all the talking done during the week, it was apparent tensions were high when Lions skipper Alun Wyn Jones and Springbok second row Eben Etzebeth were immediately at each other’s throats.

However, South Africa struck first on the scoreboard when Pollard’s penalty made the Lions pay for straying offside just a few minutes in.

Willie Le Roux’s knock-on gave the Lions a great attacking platform and when Luke Cowan-Dickie was met with a no-arms tackle from No.8 Jasper Wiese, Biggar slotted a penalty to draw the sides level.

The same offence was then met with the same punishment from Biggar’s boot to give the Lions a 6-3 lead, Pollard missing an attempt of his own to restore parity after a breakdown penalty.

The Springboks suffered a huge blow as World Rugby Player of the Year Pieter-Steph du Toit trudged off injured barely a quarter of the way through the game. 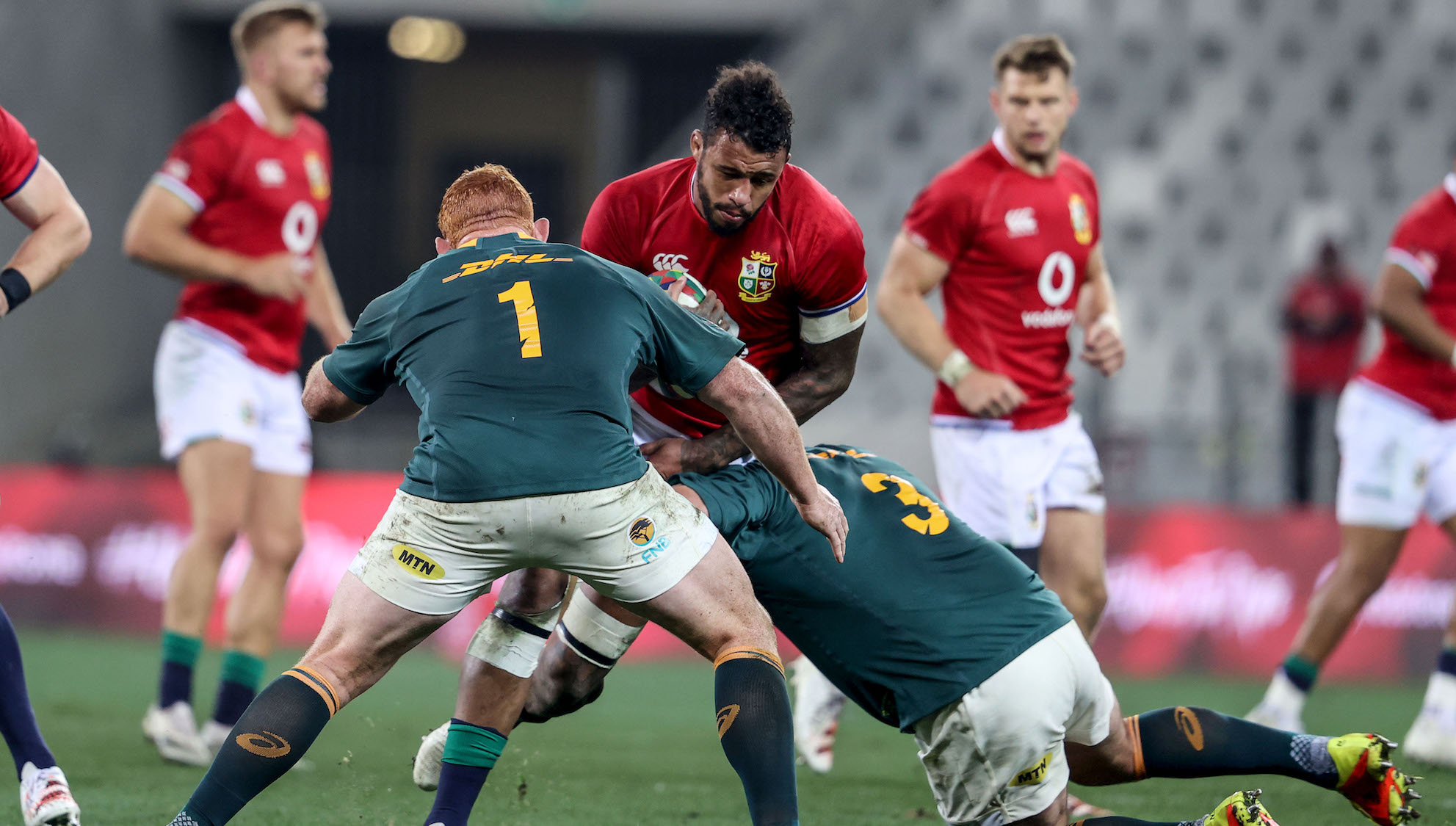 Duhan van der Merwe’s clumsy trip on Cheslin Kolbe earned him ten minutes in the sin-bin but it was soon 14-a-side after Kolbe joined him on the sidelines after taking out scrum-half Conor Murray in the air.

A tackle from the aggressive Faf de Klerk on opposite number Murray in the build-up was also checked in a busy first half for TMO Marius Jonker but it was decided there was no foul play.

A mammoth penalty from Pollard made it 6-6 after 30 minutes shortly before the Lions were restored to 15 men. 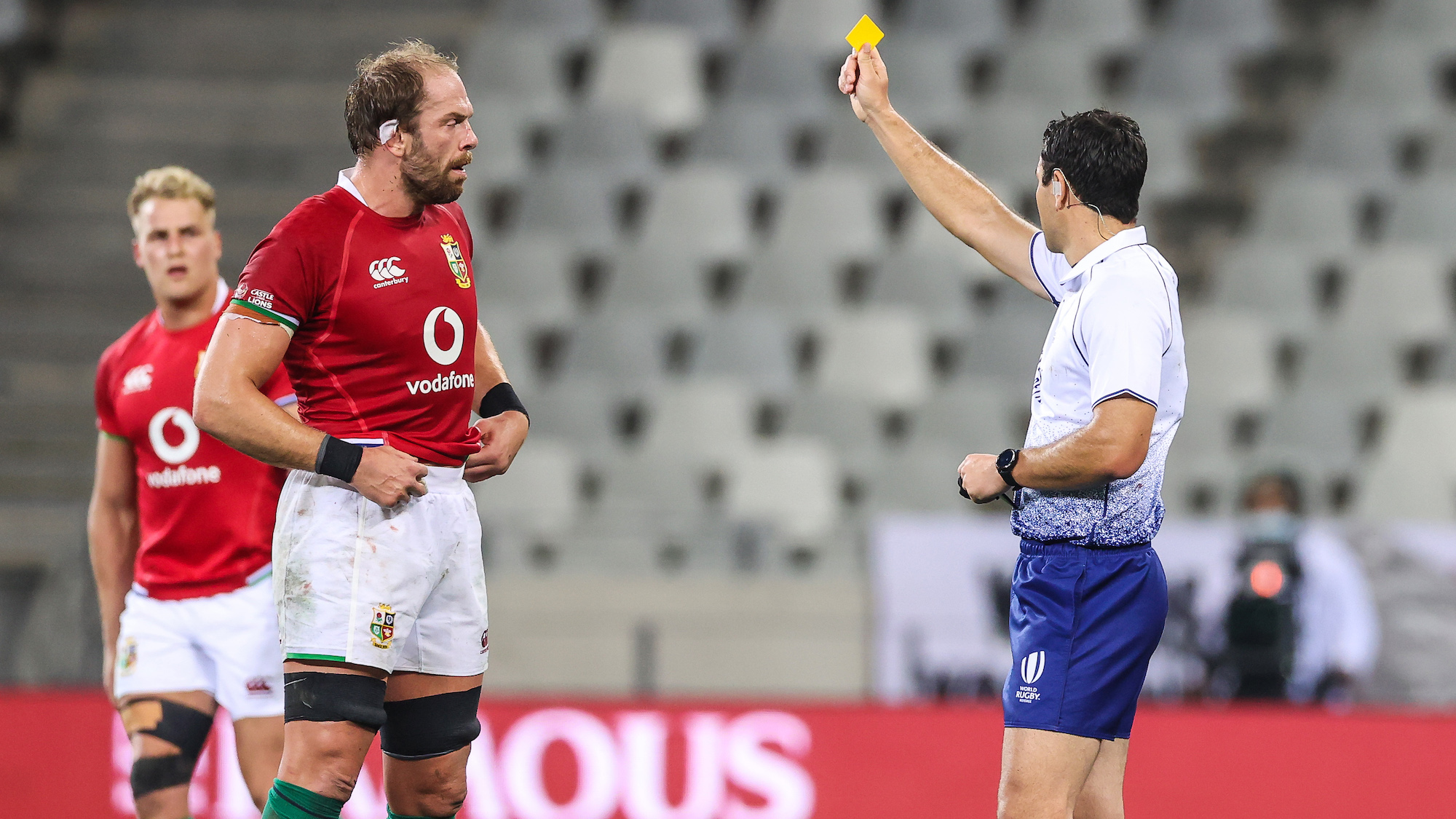 Robbie Henshaw thought he had scored the first try of the game after he collected Ireland team-mate Murray’s chip over the top, safe in the knowledge he had a penalty coming, only for the officials to rule that Springbok skipper Siya Kolisi got his arm underneath to prevent a crucial try.

Biggar kicked the penalty to put the Lions back in front after another lengthy TMO intervention was required and they held on to end a mammoth first half – that took well over an hour to complete – 9-6 up in Cape Town.

South Africa roared into life after the break and did exactly what the Lions had done to them a week previous by scoring a fast try.

Pollard’s deft cross kick found Mapimpi in space and he gathered safely and bounced over to score on the left wing.

Pollard was unable to convert, but South Africa still had an 11-9 advantage five minutes into the second period. 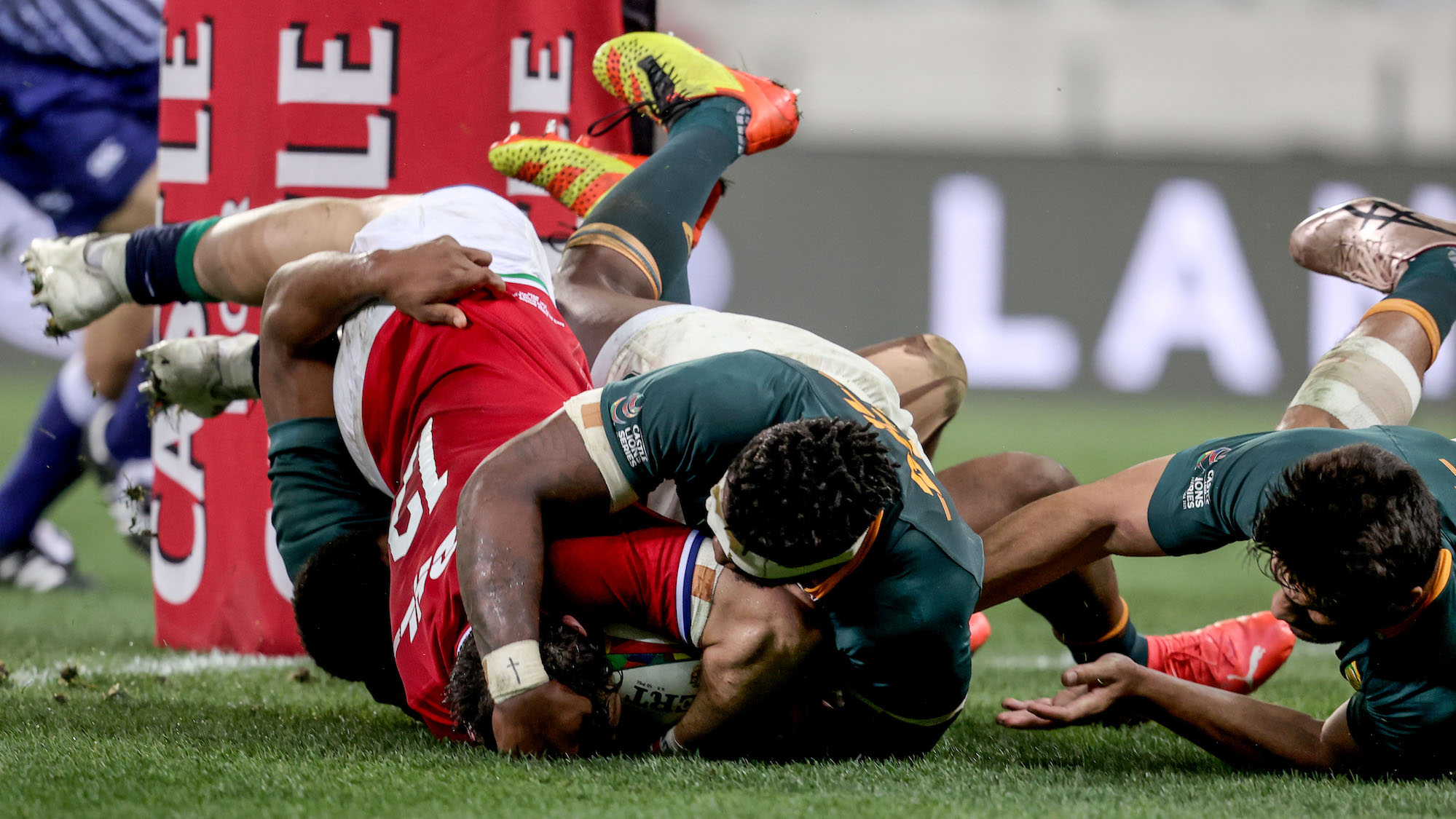 Biggar so nearly regained the lead for the Lions when Du Toit’s replacement Kwagga Smith was penalised for not releasing, but his penalty from out wide bounced off the post and fell kindly for a combination of De Klerk and Mapimpi to clear down field.

Not much rugby was played as plenty of kicks and set-pieces dominated the affair. The Springboks showed their hand by bringing on Lood de Jager, a second row, for No.8 Wiese to sure up the lineout and beef up the pack and he had the desired sizeable impact up front.

De Klerk grubbered through the onrushing Lions defence close to the line and Am grounded the ball just short of the dead ball line.

Jonker was once again called upon during a lengthy stoppage and decided there was not enough evidence of centre Am losing the ball to overturn the call. 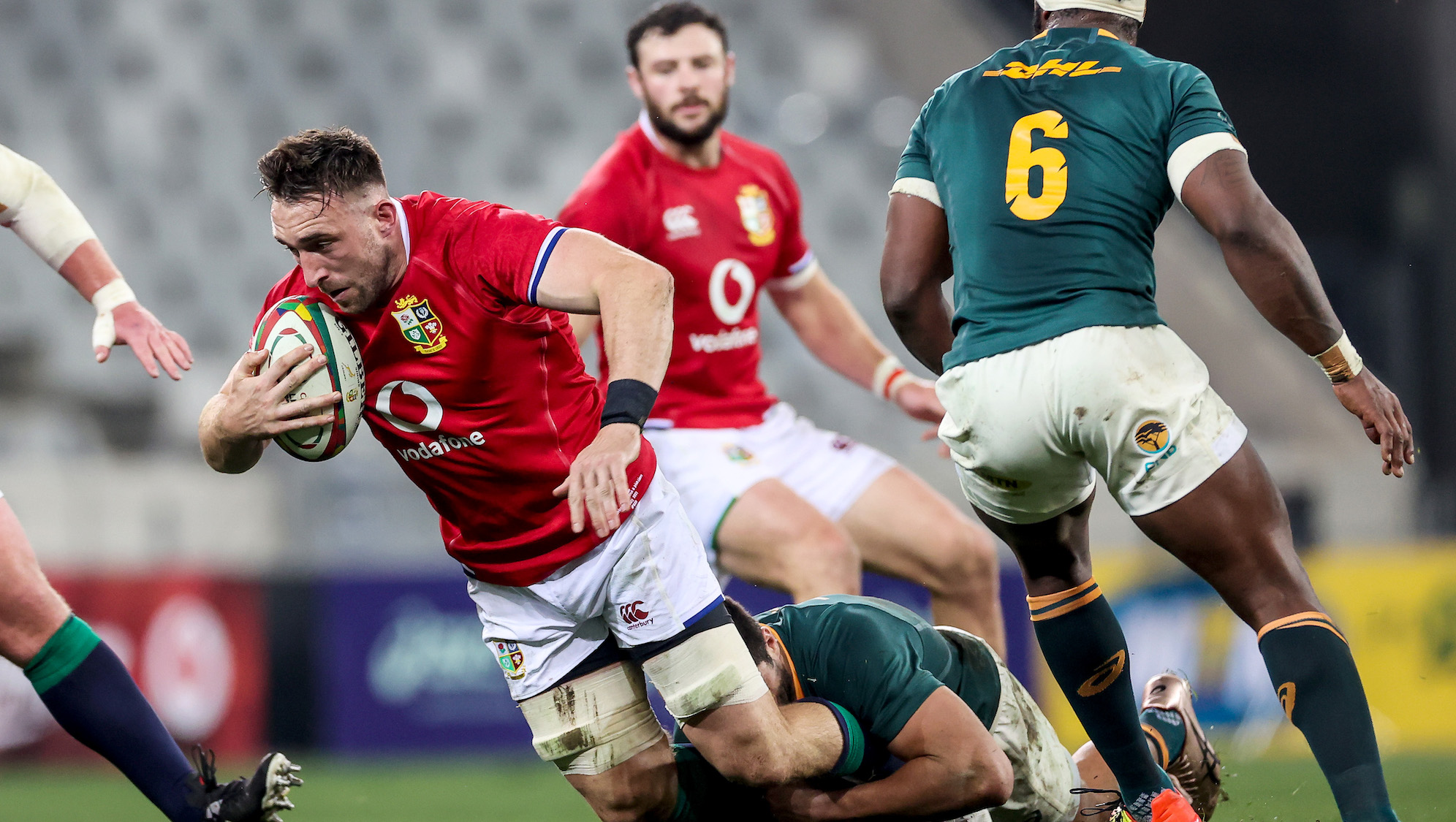 With the conversion, the Springboks opened up a nine-point lead with the score 18-9 going into the final quarter.

It was a carbon copy of the first Test in reverse, as the penalty count started to stack up for the Lions and they struggled to cope with the aerial bombardment largely orchestrated by the impressive Pollard.

Another penalty with ten minutes to go from the Springbok fly-half all-but ensured the series would head to a decider and he added a further strike with the clock in the red to add some gloss to the scoreline.

As part of the 2021 Tour, Guinness Six Nations and The British & Irish Lions are giving you the opportunity to win a brand new Lions jersey signed by the 2021 squad!

All you have to do to enter is complete and submit the simple form HERE… then keep an eye on your emails to see if you’re a winner! 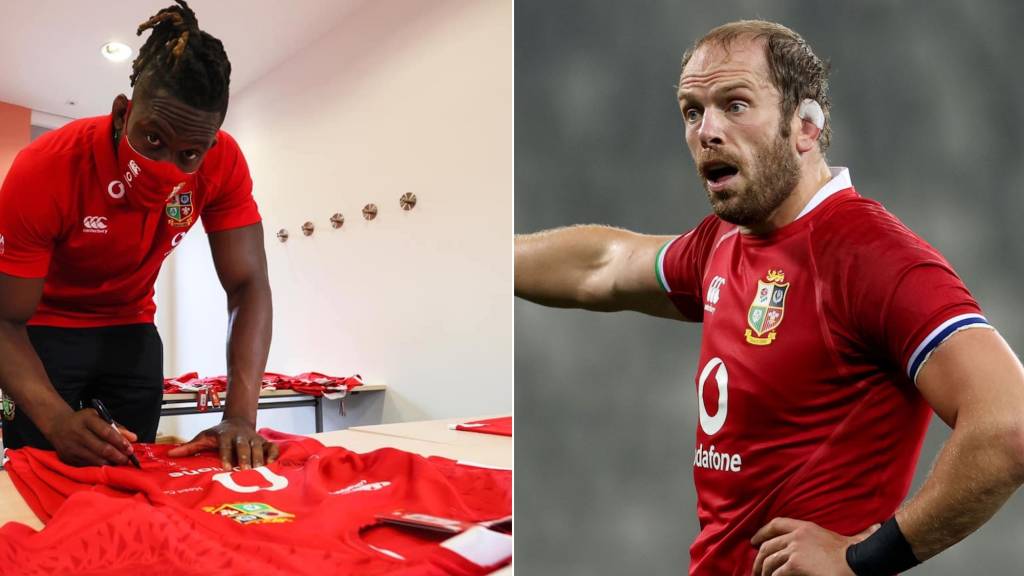