A Rhona Lloyd double inspired Scotland to a 36-12 victory over a spirited Japan at Dam Health Rugby Stadium in Edinburgh.

Japan spent three quarters of the match a player down, as second row Yuna Sato received a red card for a high tackle after 20 minutes, but they were never out of the game and battled until the very end.

Scotland took the lead after a promising start with wing Lloyd scoring her first try in the corner after Hannah Smith’s break in the 12th minute.

But eight minutes later the Sakura XV were reduced to 14, as Sato was given her marching orders.

When Lana Skeldon went over off the back of the driving maul four minutes later, it seemed as though Scotland would run away with the game.

But as we have become accustomed to with Japan, they never give up even when things are against them and two quick tries in the final five minutes of the first half meant that the visitors went into a 12-10 lead at half-time.

Firstly, hooker Nijiho Nagata went over the line from close range, before tighthead prop Sachiko Kato went over under the posts just before the half-time whistle, with a successful conversion giving them the lead against all odds.

Scotland’s second-half performance was excellent however, and the Japanese defence was no match for the early onslaught.

Megan Gaffney showed some excellent feet to get past Noriko Taniguchi and finish in the corner, while fly-half Helen Nelson added the conversion.

Suddenly Scotland had regained a 17-12 lead within five minutes of the start of the second half and momentum stayed with them, as full-back Chloe Rollie finished off a team try, again converted by Nelson. 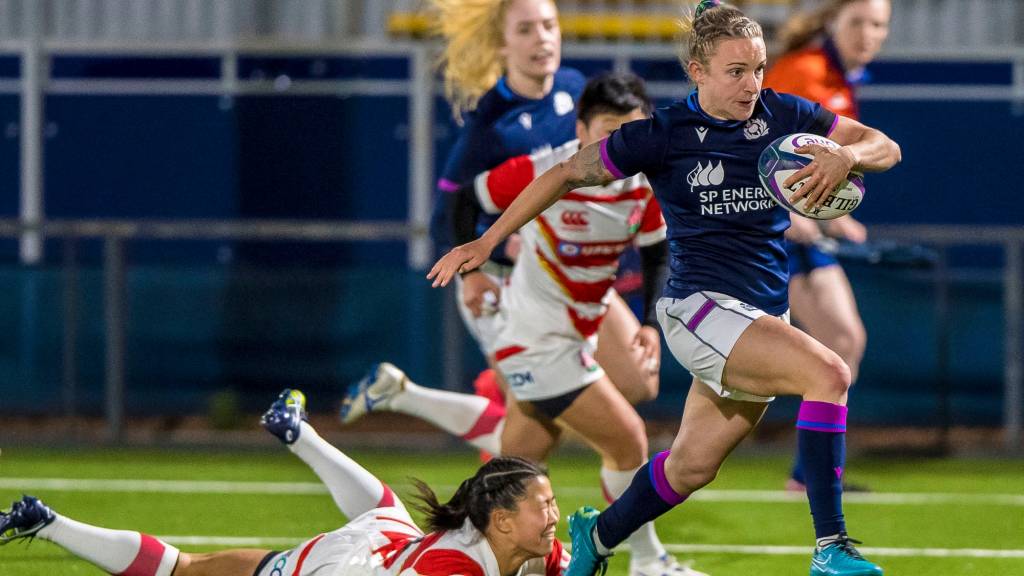 Japan still would not give up and made a handful of eye-catching breaks, but ultimately the Scottish defence was always able to recover.

Lisa Thompson scored Scotland’s fifth try after 62 minutes with an excellent line, cutting inside on a hard line to take the pass from Nelson and bundle over, giving Scotland a 31-12 lead with less than 20 minutes on the clock.

Japan continued to defend with all their might but they could do nothing about Scotland’s sixth score, as Lloyd chased down an excellent kick by Sarah Law and dotted down in the corner for her second.