The 2021 Guinness Six Nations will be remembered as a real classic, with breath-taking tries, action-packed matches and dramatic finishes aplenty.

Wales finished with their second title in three years and their first under head coach Wayne Pivac, although they agonisingly missed out on a Grand Slam, while Scotland banished long-term losing records in England and France.

We bade farewell to CJ Stander, waved hello to Louis Rees-Zammit and toasted Hamish Watson as the Player of the Championship.

Here’s how a memorable year unfolded.

The Championship started with the biggest of bangs, as Scotland smashed their Twickenham hoodoo to smithereens with a famous win to regain the Calcutta Cup on the 150th anniversary of their rivalry with England.

Duhan van der Merwe’s first-half try and a pair of Finn Russell penalties guided them to their first victory at England HQ since 1983, while the defending champions limped to their first home Championship defeat in three years.

It marked a fourth Guinness Six Nations win in a row for Scotland, going back to 2020, and set the tone for an impressive Championship campaign. 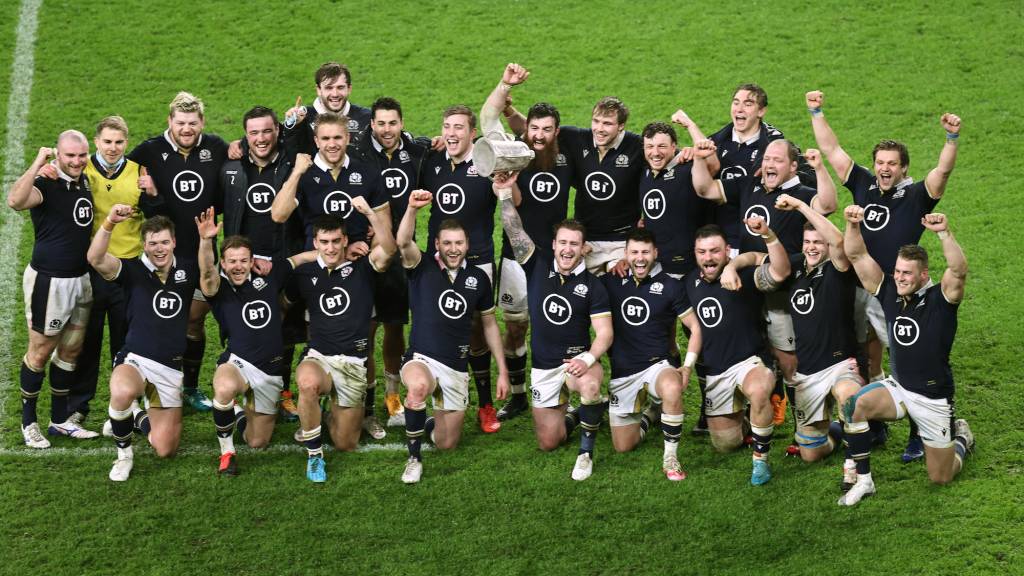 Earlier in the day, France underlined their title credentials with a handsome 50-10 win in Italy, inspired once again by the sensational Antoine Dupont.

The scrum-half laid on four tries for his comrades and scored one himself, as Les Bleus waltzed to the top of the table.

Wales joined them in the win column on Sunday, as George North helped spark a second-half blitz from Wales that saw them come from behind to defeat 14-man Ireland 21-16 in Cardiff.

Peter O’Mahony made unwanted history by becoming the first Irishman to be sent off in the Guinness Six Nations when he made contact with the head of Tomas Francis trying to clear out a ruck on 13 minutes, giving referee Wayne Barnes no option but to brandish a red card.

Ireland still led 13-6 half-time lead but North’s scintillating try ten minutes into the second half turned the tide back in Wales’s favour, with Louis Rees-Zammit then dotting down on his first Guinness Six Nations appearance to give the hosts a lead they never surrendered.

The second weekend of the Championship took us to BT Murrayfield for the first time, and what a game it proved to be.

Rees-Zammit dotted down a phenomenal second-half try – having already scored one in the first 40 minutes – as Wales came from behind to beat 14-man Scotland 25-24 in a Guinness Six Nations thriller.

The 20-year-old winger raced onto the end of his own chip to score the winning points just ten minutes from time, breaking Scotland’s hearts and ensuring Wales entered the first rest week with two wins from two.

Earlier in the day, Jonny May’s spectacular flying finish helped England bounce back in style from that defeat to Scotland as they notched a convincing 41-18 victory over Italy at Twickenham.

May’s try was his 32nd at international level and moved him into sole possession of second place on England’s all-time tries list behind only the great Rory Underwood (49).

And in the last match before the first rest week, tries from captain Charles Ollivon and winger Damian Penaud saw France claim their first Guinness Six Nations win in Dublin for ten years in an absorbing battle with Ireland at the Aviva Stadium.

An Antoine Dupont break helped set up Ollivon to score in the left corner, while Penaud added another try midway through the second half with a diving finish.

ROUND 3 – WALES SOAR PAST ENGLAND

There were only two matches on the third weekend of the Championship, with France’s home game with Scotland postponed to late March because of Covid-19.

No matter though, as Ireland claimed their first win of the campaign with a 48-10 victory away to Italy thanks to two Will Connors tries. 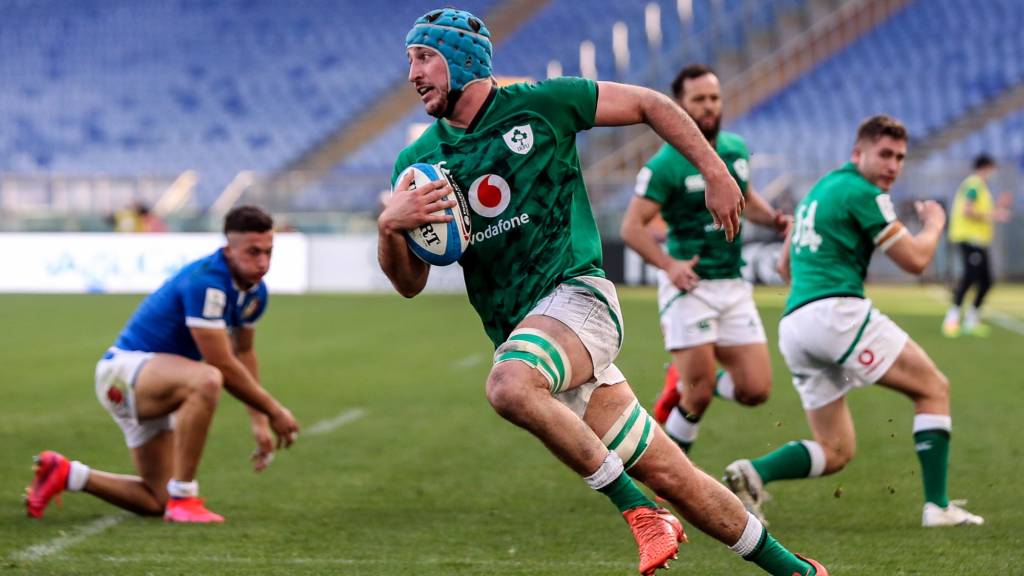 In Cardiff, Callum Sheedy kicked three late penalties and Cory Hill bulldozed over the whitewash as Wales kept their Grand Slam hopes alive with a thrilling 40-24 victory over England.

The visitors appeared favourites to win when Owen Farrell converted Ben Youngs’ try to level the score at 24-24 in the 62nd minute.

But Sheedy quickly snuffed out their hopes with three ice-cold kicks before Hill finished it by muscling his way over from a metre out to seal an emphatic victory.

After earlier wins against Ireland and Scotland, this result also earned Wales the Triple Crown.

Wales were the last team standing in the pursuit off the Grand Slam after Round 4, as a rare Maro Itoje try helped England end France’s bid.

Itoje ploughed over for his third England score in the 76th minute, denying France a first away win at Twickenham since 2005 and the prospect of a Super Saturday showdown with fellow Grand Slam-chasers Wales.

Wales were the last unbeaten side in the Championship and sat nine points clear at the top of table heading into Round 5 after they downed Italy.

Ken Owens scored an unlikely try double as Wales moved within one step of a second Grand Slam in three years thanks to a convincing 48-7 victory in Rome.

On Sunday, Johnny Sexton’s nerveless late penalty handed Ireland a dramatic 27-24 triumph over Scotland in Edinburgh to end their hosts’ slim hopes of winning the title.

To seal their first Championship title since 1999, Scotland needed to win their final three games and get help from elsewhere but instead narrowly came out on the wrong side of an enthralling encounter at BT Murrayfield.

They had fought back from 14 points down with 20 minutes left to level the score at 24-24 thanks to tries from Huw Jones and Hamish Watson before immediately conceding a penalty that Sexton converted from near the left touchline for the win.

ROUND 5 – A SUPER SATURDAY

Brice Dulin’s last-gasp try broke Wales hearts as France denied them a Grand Slam and kept their own title hopes alive with a 32-30 victory in an all-time great Guinness Six Nations match in Paris.

With the clock having ticked beyond 81 minutes, Wales led 30-27 and were seconds away from a Grand Slam, only for Dulin to go over in the corner and completely turn the tables.

That only begins to tell the story of the drama in the French capital as the hosts ended the game with 14 men following Paul Willemse’s red card but Wales finished with 13, after two late sin-binnings.

The result meant France could win the title if they recorded a bonus-point victory, by a margin of 21 points, over Scotland the following Friday.

In Dublin, Jack Conan scored one try and made another as 14-man Ireland overpowered England to beat them for the first time in three years.

The No.8 set up Keith Earls midway through the first half, patting down a lineout to the winger who then picked a brilliant line, broke through England’s defence and sprinted to score.

Conan then grabbed one himself by burrowing his way over with a pick-and-go following a brilliant spell of Ireland possession inside England’s 22 to cement a 32-18 win.

In the early kick-off, Dave Cherry and Duhan van der Merwe bagged braces as Scotland returned to winning ways with a record 52-10 bonus-point victory over Italy at BT Murrayfield.

In the end, Wales were crowned champions after France missed out on their first title in 11 years, as Scotland claimed a late victory at the Stade de France.

Duhan van der Merwe crossed in the 86th minute to complete a pulsating game and thrilling Championship – earning Scotland a first away win in France since 1999.

Van der Merwe’s try made little difference to the destination of the title, with France set to fall short regardless of whether they won or lost at the death.

Les Bleus needed to cross at least four times and to win by at least 21 points but they could only score three and never truly threatened to run away with the game.

It meant Wales could celebrate as kings of the Guinness Six Nations for the following 12 months.