The Women’s Six Nations has enjoyed plenty of thrills and spills down the years so on International Women’s Day, what better time to count down ten of the Championship’s best games.

From Championship deciders to upset victories, with a world record thrown in to boot, here are some of the most dramatic games going back just over a decade.

Between 2006 and 2012, England were utterly dominant in the Six Nations, winning seven successive titles and six Grand Slams. The one match they lost? That was in Wales in 2009 in a game that went down to the wire. Tries from Fiona Pocock and Emily Scarratt had helped England into a 12-8 lead at the break, Mel Berry crossing for the sole Welsh try.

Aimee Young got another for the home side to put them in front before Katy Daley-Mclean’s penalty four minutes from time looked set to deny Wales a famous victory. They would not be denied though, Non Evans kicking her second penalty of the day in the dying seconds to secure a first-ever win over England.

Another landmark season, this time for Ireland who earned their first Grand Slam in the women’s Six Nations. Having edged past Wales in Round 1, Ireland welcomed the defending champions to Ashbourne and produced a blistering display. Alison Miller was the star of the show, crossing for a hat-trick of first-half tries as Ireland opened up a 20-0 lead. Niamh Briggs added a fourth after the break and Ireland romped home. They went on to beat Scotland and France before a narrow 6-3 win in Italy clinched the Slam. 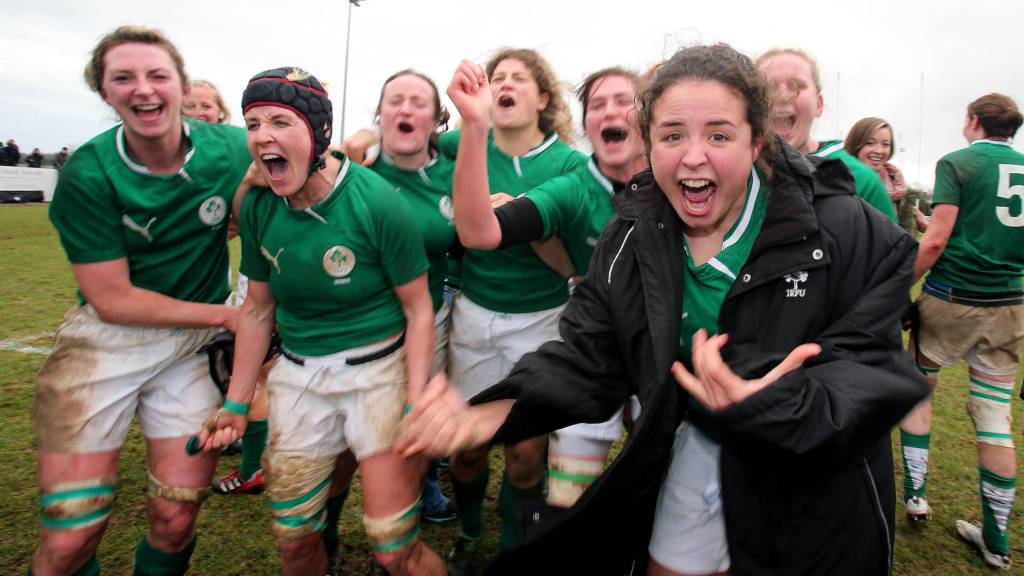 France had gone nine years without a title but in 2014 they opened their campaign by beating England, setting themselves up for a tilt at the Championship. By the time they hosted Ireland in Pau in Round 5, the Grand Slam was on but they faced an Irish team who were still mathematically in the hunt themselves, albeit needing a big victory. That never looked on with Marion Lièvre crossing after just six minutes for the only try of a first half dominated by the hosts. Elodie Portaries and Shannon Izar crossed to make it 19-0 and set up what looked like being a comfortable win. But Ireland came roaring back thanks to Gillian Bourke’s double and it ended up being a nervy finish before France could claim the Slam. 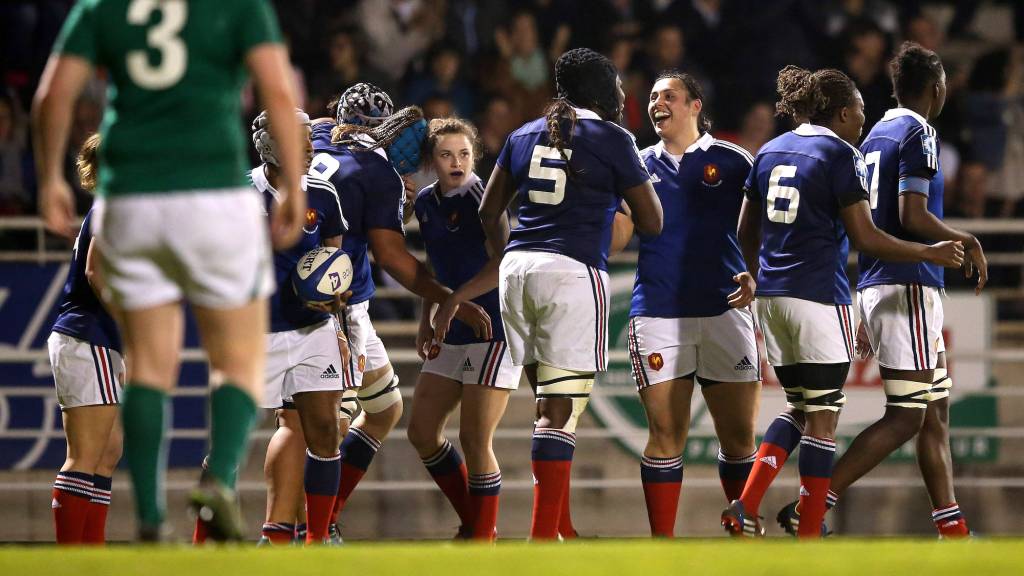 Twickenham was the setting for the opening round fixture between England and France, with Les Bleues aiming for a third title in four years. They looked good for it when Shannon Izar and Gaëlle Mignot went over in the first half and they led 13-0 at the break. But England stepped through the gears in the second half with Emily Scarratt’s boot adding to Danielle Waterman’s try to push England into a 19-13 lead. French hopes were ended three minutes from time when Amy Wilson-Hardy went over, and England carried that momentum all the way to the Slam and a first title in five years. 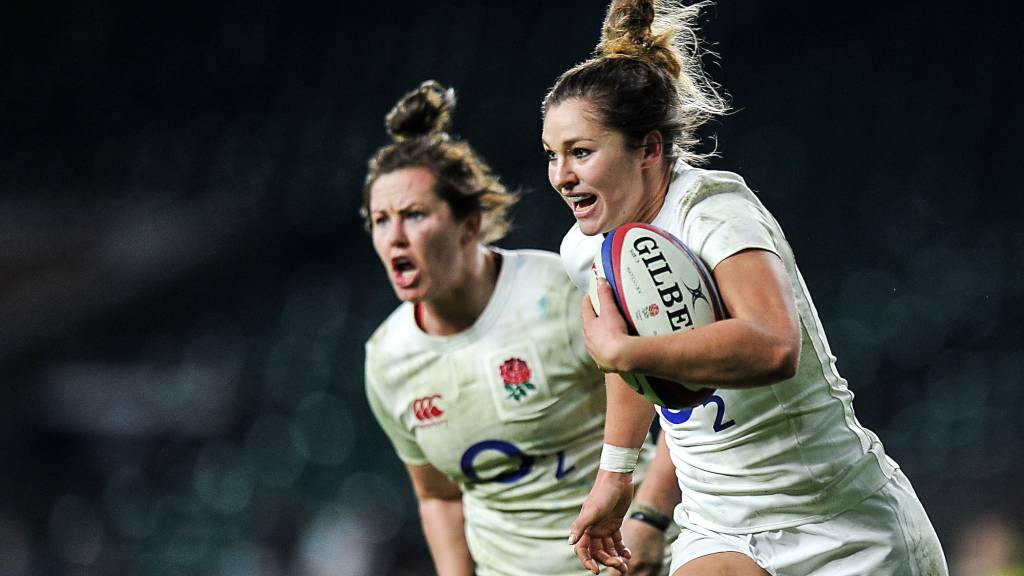 Scotland had gone seven years without a win in the Six Nations, but in 2017 it was clear things were changing. Ireland had escaped with a last-gasp win in Cumbernauld in Round 1, and when Wales came to town in Round 3, the Scots were not going to let another chance slip. It was the visitors who raced out of the blocks, with Carys Phillips crossing, followed by a penalty try to open up a 14-0 lead.

But Lisa Thomson went over for a converted score before half-time, and Rhona Lloyd then added a second to get Scotland back to within two points. Three minutes from time Sarah Law had the chance to put the Scots in front, and she made no mistake from 30 metres as Scotland secured that long-awaited win. They were at it again in Round 5 with a 14-12 win over Italy, Lana Skeldon’s kicking proving the difference in that one. 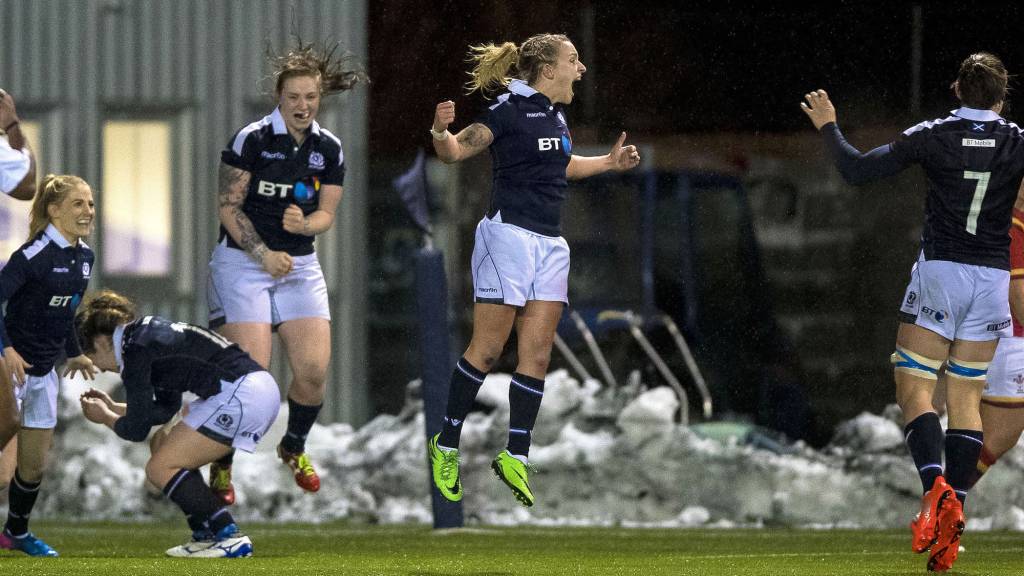 One of the most memorable occasions in Women’s Six Nations history, a world record crowd of 17,440 packed into the Stade des Alpes and were treated to a thriller. Abby Dow’s early try for England was quickly cancelled out as Jessy Trémoulière and Caroline Drouin went over to give France a 10-7 half-time lead. Amy Cokayne put England back in front, but a Trémoulière penalty cut the deficit. Katy Daley-Mclean responded in kind, but Trémoulière had the final say as she broke two tackles on her way to the winning score right at the death, sparking wild celebrations. France went to Wales and clinched the Grand Slam in convincing fashion. 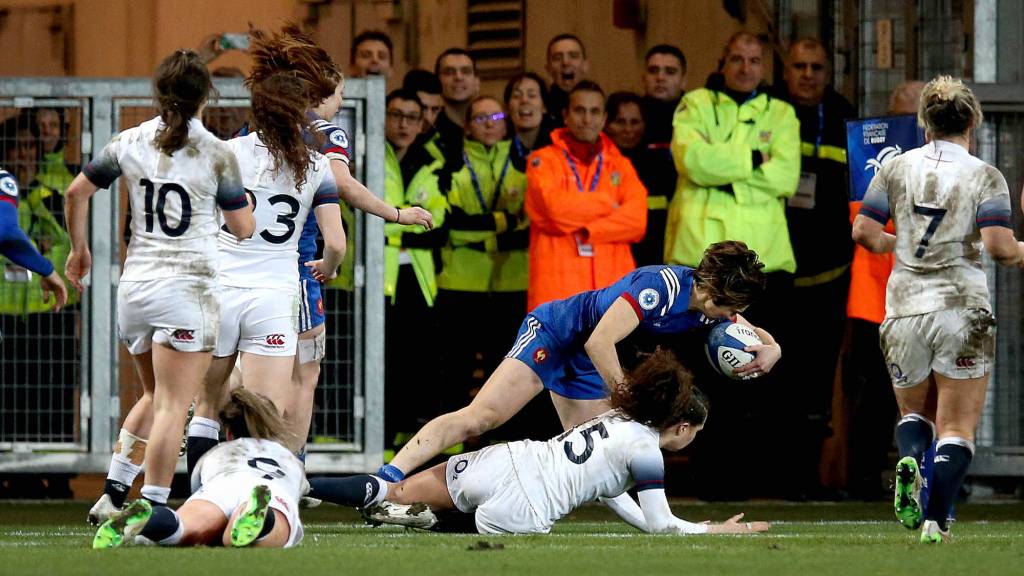 In terms of attacking intent, Italy’s clash with Ireland in 2019 is one of the greatest in Women’s Six Nations history, with 44 points and six tries in the first half alone. Italy ended up edging it, claiming their first win over Ireland in the process. Aura Muzzo had put the home side into an early 10-0 lead, but Eimar Considine hit back for Ireland. Giada Franco crossed for the first of two scores, but Considine and then Anna Caplice went in for Ireland to open up a 22-17 lead. Sofia Stefan ensured that Italy went in level with a try right on the stroke of half-time. Franco’s second on 50 minutes proved decisive, with Michela Sillari slotting her third conversion of the game. Laura Sheehan did get a fourth Ireland try, but Nicole Fowley could not convert and it was Italy who emerged victorious. 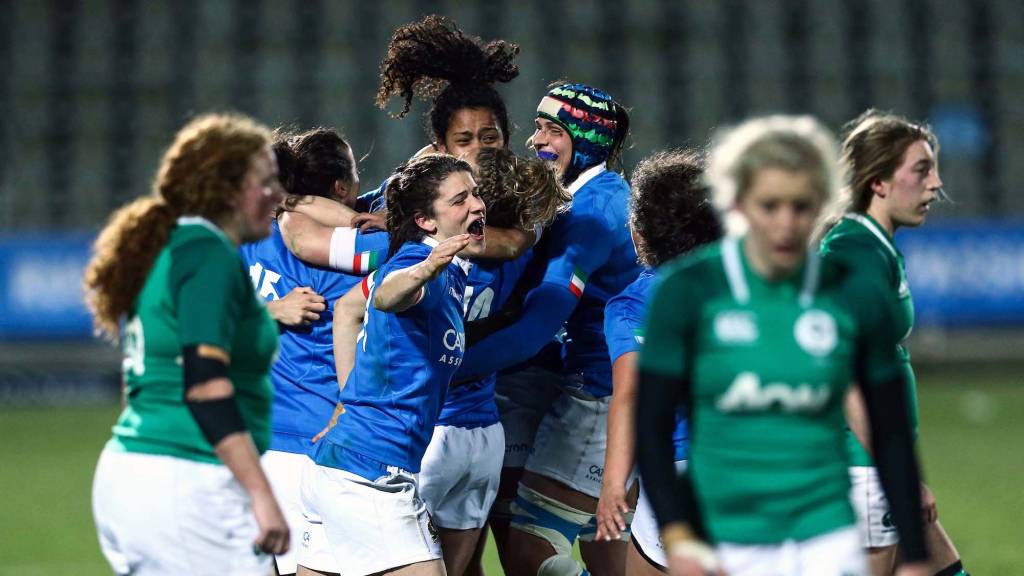 The 2019 campaign was a breakthrough one for Italy, but even so, few would have predicted what happened in Round 5. Welcoming France to Padua, the Azzurre needed a bonus-point win to overtake the French in the table, something they had never previously achieved. While they had enjoyed some success against Les Bleues over the years, it had often come in tight-fought affairs, but here they cut loose. Sofia Stefan’s try had helped them into an 8-5 lead at half-time with Melissa Bettoni crossing for the second early in the second half. Michela Sillari’s boot opened up a lead as a win started to look on the cards before tries from Beatrice Rigoni and Manuela Furlan sealed one of the greatest wins in Italian women’s rugby history. 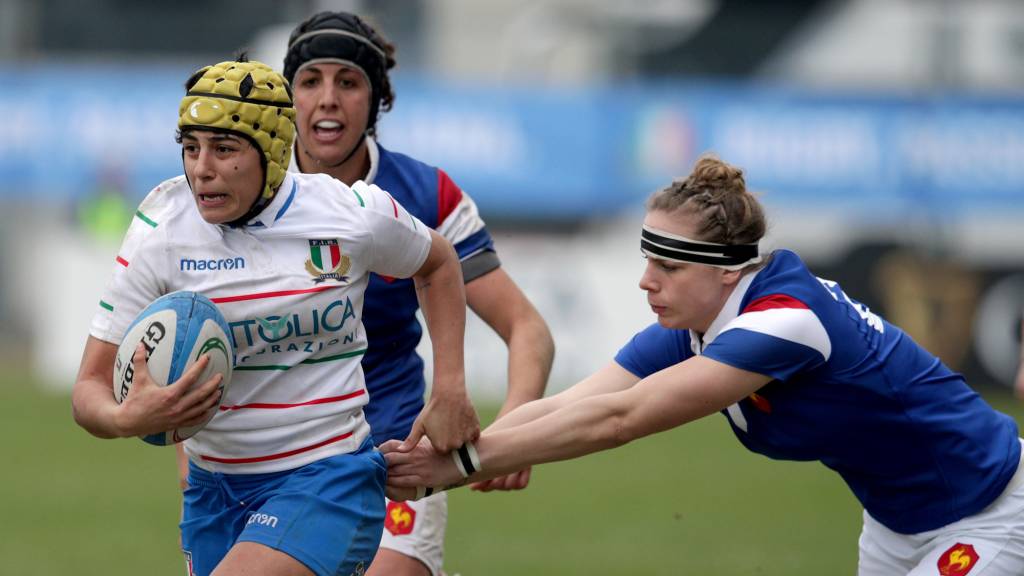 Back to Pau for the opening game of the 2020 Championship when two of the title favourites went head-to-head. This was a game that ebbed one way then the other, with England dominating early and opening up a 12-0 lead thanks to tries from Abby Dow and Vicky Fleetwood. Having barely touched the ball for the first 20 minutes, France hit back through Laure Sansus and trailed 12-10 at the break. France started to take control as they looked to move in front, but a clever offload from Amber Reed put Emily Scarratt over from halfway, and despite Jessy Trémoulière’s penalty, England held on for a win that put them on course for the Grand Slam.

One of the more unlikely results in the competition’s history. Even in their recent resurgence, Scotland had rarely troubled France, and in 2020 it looked to be a similar story as Les Bleues led 13-3 in the rearranged fixture thanks to tries from Agathe Sochat and Safi N’Diaye. Helen Nelson’s penalty got Scotland back within a score, and then after good work from Jade Konkel, Rachel Shankland went over for a try on debut. Nelson added the extras and Scotland held on for a remarkable draw. 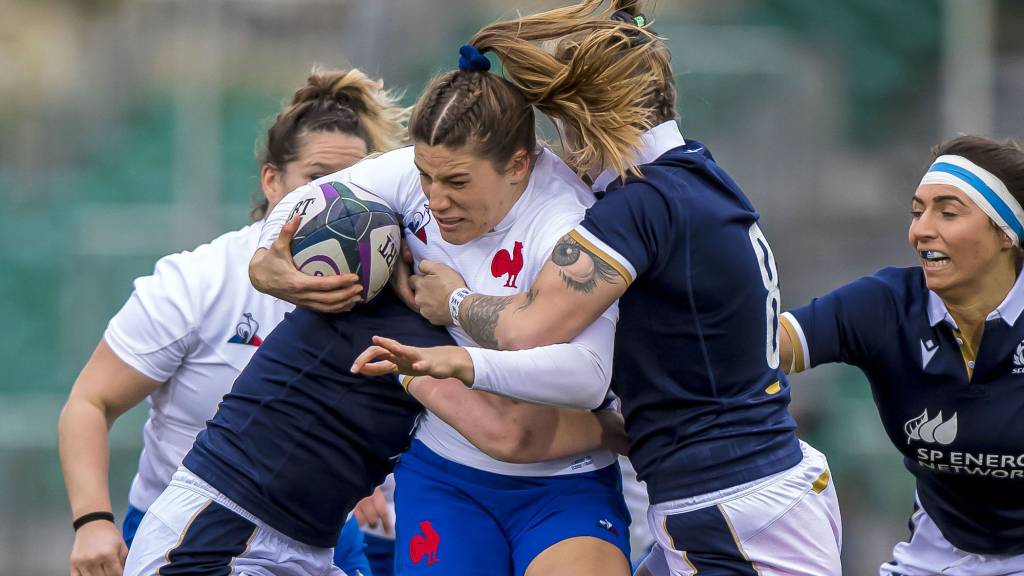