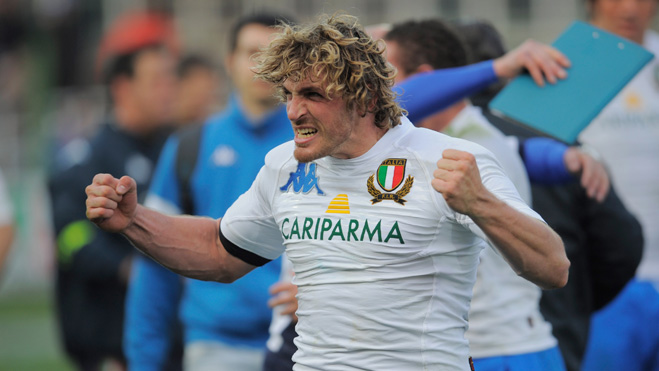 Scotland (1999) were the last team to lift the Five Nations trophy as Italy joined the following year and the Championship became a six-country festival of rugby with three fixtures in each round.

England won the first edition of the modern format before repeating the trick in 2001. France won their first Championship of the professional era in 2002 – winning all five of their matches to take the Grand Slam.

With 2003 being a Rugby World Cup year, there was a little more to play for than usual as this would be one of the last chances teams would have before their attempts at lifting the Webb Ellis Trophy in Sydney just a few months later.

England would go on to win the Grand Slam that year in what is surely their most successful calendar year to date after beating Ireland in Dublin 42-6 in the final game of the Championship.

After winning the Rugby World Cup in November 2003, England would finish third just four months later in the 2004 Championship – losing to both Ireland and France, the latter taking the Grand Slam after a clean sweep.

In 2005 Wales became the first team ever to win a Grand Slam by playing more games away than at home – a feat repeated by Ireland four years later.

A year later France pipped Ireland on points difference however the latter did receive the Triple Crown in trophy format for the first time ever. Italy finished bottom of the table that year but achieved a historic feat by earning their maiden point away from home after drawing with Wales.

In 2007, with four teams having a mathematical chance of lifting the trophy on the final day, France retained their crown on points difference again.

Italy made further history by winning their first away match against Scotland in Edinburgh and also by picking up two victories for the first time after beating Wales in Rome.

Scotland replaced Italy in settling for sixth, while Ireland won the Triple Crown for the second straight occasion and third time in four years.

Wales ended France’s run in 2008, winning the Grand Slam for the second time in four years after a remarkable opening against England. Trailing by 13 points Wales came from behind to win 26-19, thanks mainly to Mike Phillips’ 70th-minute try, and dispatched Scotland 30-15, Italy 47-8, France 29-12 and Ireland 16-12. Wales wing Shane Williams was named the Player of the Championship after scoring six tries while England, World Cup finalists in 2007, were forced to settle for second.

The Championship would go down to the wire in 2009 with one of the most exciting games in Six Nations history. In the final match, Wales hosted Ireland in Cardiff with a Triple Crown on the line. The hosts knew a 13-point win would be enough to retain their title with Ireland needing a win of any kind to win the Grand Slam.
Drama ensued – with Ireland leading 17-15 at the death thanks to a late drop-goal from veteran fly-half Ronan O’Gara looking like enough for the men in green to win by the slimmest of margins.

However, a late indiscretion at the breakdown gave Welsh pivot Stephen Jones a chance to snatch victory. With time up on the clock, Jones had a 50m penalty that would break Irish hearts. However – to the delight of the away supporters it was to just drift wide. Ireland had won their first Grand Slam in 61 years.

England finished second as a result in their first Championship under Martin Johnson while France and Wales contested the first-ever game played on a Friday night.

The 2010 Six Nations belonged to France as they won the Grand Slam for the first time since 2004. Les Bleus were rarely troubled, opening up with an 18-9 win over Scotland before defeating Ireland 33-10, Wales 26-20 and Italy 46-20. France had already won the Championship going into their final game with England after Ireland lost to Scotland just hours earlier. But despite being pushed by England, who scored the only try of the game, France came out on top 12-10 at the Stade de France to win the Grand Slam.

Ireland’s 23-20 loss to Scotland in the final game of the campaign not only denied them the Triple Crown but saw Italy finish sixth for the third year running.
England ended a run of eight years without a title and would again win the Championship in a World Cup year as they wrapped up the 2011 Six Nations on eight points. Winger Chris Ashton was the spearhead, racking up six tries including four at home to Italy in a 59-13 victory. The Azzurri did however make history with a first Championship win over France, stunning Les Bleus 22-21 in Rome.

Ireland would deny England a Grand Slam with a convincing 24-8 win on the final weekend with tries from Tommy Bowe and Brian O’Driscoll. And despite securing that historic victory over the French, Italy again came sixth after a 21-8 defeat in Scotland in their final match.

2012 would see Wales win the Grand Slam – beating both Ireland 23-21 and England 19-12 on the road. Ireland and France would draw in Paris 17-17 which would see them ultimately finish third and fourth respectively.

Although losing to Ireland on the opening day of the Championship – Wales would retain their title on points difference in 2013 with a famous 30-3 win over England.  A big contingent of Welsh made the 2013 British & Irish Lions Tour to Australia just a few months later as a result. Italy would take two big scalps in 2013, beating France for the second time in three seasons and beating Ireland in Rome 22-15.

Joe Schmidt then took over as Ireland head coach and would immediately go on to win the 2014 and the 2015 Championships, both by points difference having lost to England in 2014 and Wales in 2015. The final day of the 2015 Six Nations will go down as one of the Championship’s most exciting – being known as the original ‘Super Saturday’!

Wales were first out of the blocks – beating Italy 61-20 in Rome, putting them top of the table.

However, that changed within two hours as Ireland beat Scotland 40-10 to regain pole position on points difference. Although scoring four tries was pivotal – the key for the men in green was a last-ditch tackle by Jamie Heaslip to keep out Stuart Hogg and thus preserving their 30-point winning margin.

England hosted France in the final game knowing a victory by 26 points or more would crown them champions.

The hosts got off to the perfect start with Ben Youngs crashing over for a try after just two minutes. For every try England scored, Les Bleus responded with their own before six minutes from time England wing Jack Nowell crossed to make it 55-35 and a nail-biting last few minutes in Twickenham ensued.

However, it wasn’t to be for the Red Rose as France kicked the ball out with England missing out – just six points short of the title.

England would turn around their fortune just a year after coming so agonisingly close. With Eddie Jones now at the helm, England would go on to win five from five in the 2016 Championship to win a Grand Slam – their first in 13 years.

Ireland would record yet another draw, this time at home to Wales on the opening day of the Championship. Scotland recorded big wins against Italy (20-36) and France (29-18).

The 2017 Championship saw a change in the points system – with bonus points being added for the first time to ‘Rugby’s Greatest Championship’. Each team would now be awarded four match points for a win and also an extra point if they scored four tries or more. A team would receive a match point if they lost by seven points or less or they scored four or more tries while losing. A team thus could lose a match by seven points or less and score four tries or more to leave with two match points.

Despite losing to Ireland in Dublin on the final day to lose out on back-to-back Grand Slams, England kept their Championship – finishing with 19 points in first to Ireland’s 14 in second.

And Schmidt’s Ireland backed up that victory by running the table in the 2018 campaign to claim the Grand Slam.

Their historic achievement owed much to a last-gasp Jonathan Sexton drop goal in Paris on the opening week to down France before they finished the job with an impressive win over England at Twickenham.

Winger Jacob Stockdale scored a try in that win at Twickenham to take his tally for the 2018 Championship to seven – a record in the Six Nations era.

In 2019 there was yet another Grand Slam – the third in the last four editions of the Championship – but this time it was Wales celebrating.

In Warren Gatland’s final year at the helm, the Kiwi became the first head coach to win three Grand Slams while skipper Alun Wyn Jones joined an elite club of Welsh players to have done the same thing.

The Grand Slam was secured in Cardiff on the final Saturday with a dominant victory over an Ireland side that still had a slim chance of the Championship coming into the weekend.

England and Scotland rounded off an amazing 2019 Championship with a Calcutta Cup classic at Twickenham that ended in a 38-38 draw.

That was the highest scoring draw in the history of international rugby and all the more remarkable considering England led 31-0 after half an hour and then trailed 38-31 before George Ford’s last-gasp score rescued a share of the spoils.

The drama keeps on coming in Rugby’s Greatest Championship, and the 2020 edition will be one not to miss. 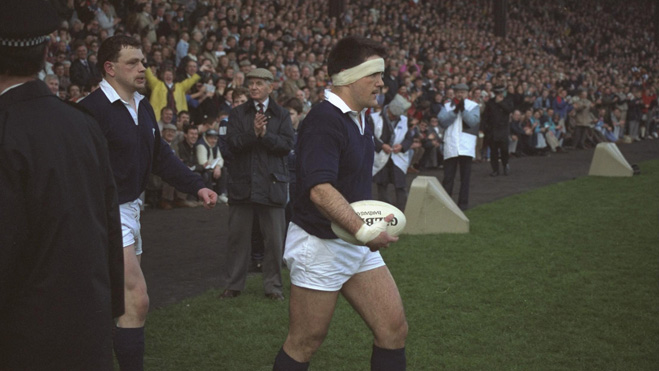 Proceedings were halted again during World War II and resumed in 1947 as the Five Nations with France welcomed backed into the fold.

France won their first shared title seven years later in 1954 and their first outright title in 1959 and by the 1970s the Five Nations had become the pre-eminent series in Northern hemisphere rugby union. Matches became all-ticket affairs, gaining huge popularity and a large television audience, however in 1972 the tournament was not finished after Scotland and Wales refused to travel to Dublin to play Ireland.

The season after was unique for a five-way tie, with every nation having won and lost two games. The 1970s marked the golden age for Welsh rugby as they won three Grand Slams and one Triple Crown during the decade, an achievement the modern team could yet surpass having won Grand Slams in 2005, 2008 and 2012.

There was no tangible reward for winning the Five Nations Championship until 1993 when a trophy was presented for the first time to the winners – who were France. Prior to 1994 teams that finished equal on points shared the Championship but from then on ties were broken by considering the points differences between the teams.

Up to World War I

1871, England and Scotland played the first rugby union international with the latter coming out on top.

After 12 years of occasional friendly matches between the teams, the inaugural Home International Championship, comprising England, Ireland, Scotland and Wales was played in 1883. England won the first series, along with a Triple Crown, and up until 1893 when Wales won and 1894 when Ireland won only them and Scotland had been crowned champions.

Wales’ triumphs in 1908 and 1909, although won during the Home Nations era, were the first Grand Slams as they defeated France in both seasons.

France officially joined in 1910, having played in four tournaments up to that point, with the Championship now referred to as the Five Nations. England won the first Championship of the new era while Wales followed up winning the first ever Grand Slam by winning the first Grand Slam of the Five Nations a year later. The competition was suspended during World War I before France were ejected from the tournament in 1931, which reverted back to being the Home Nations from 1932 through to 1939.